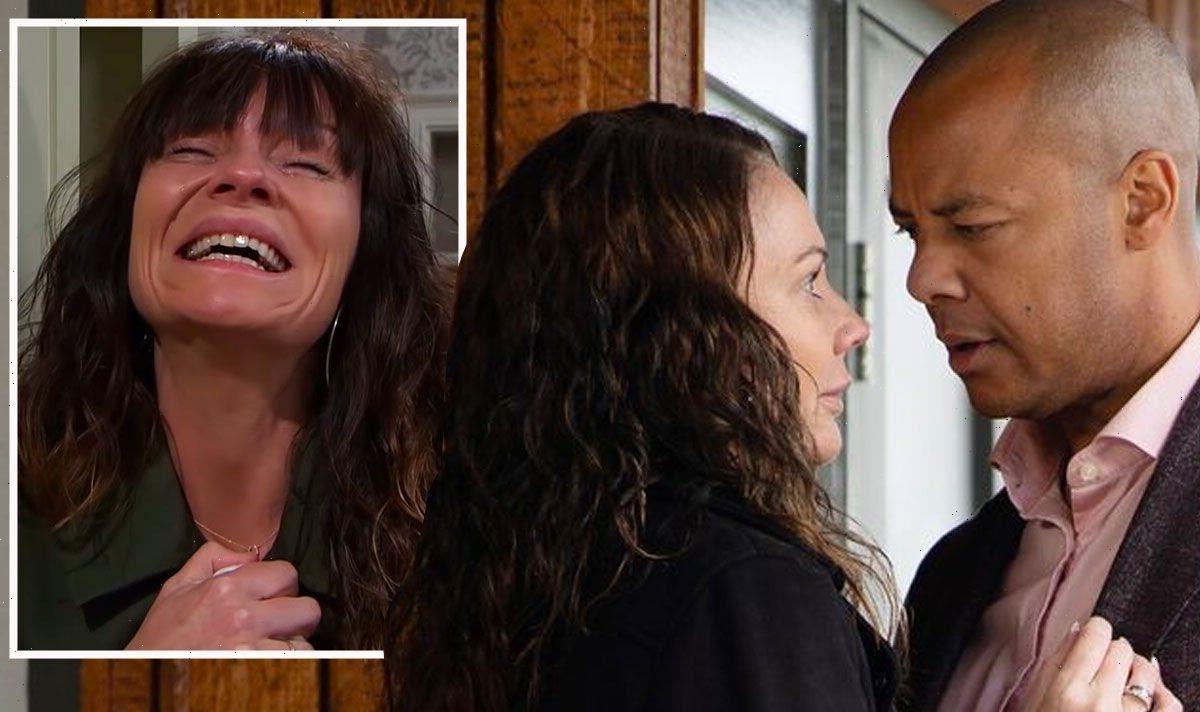 Chas (played by Lucy Pargeter) has always had a flirty yet vengeful relationship with Emmerdale villain Al Chapman (Michael Wildman) because of the way he ha treated her family. In the past, she has been tempted to cheat on her husband Paddy (Dominic Brunt) with him but she always remembers how good she has it with her spouse and the family they have created. However, as she tries to get her head around Faith Dingle’s (Sally Dexter) terminal cancer diagnosis, it seems she hits self-destruct, with life-changing repercussions on the ITV soap.

The drama begins as Chas struggles with the fact her mother Faith no longer wants to attend chemotherapy sessions to treat her cancer.

Instead, she wants to live out the rest of her days with her loved ones and accept when the time comes, she will go.

Lashing out at everyone around her, Chas ends up hitting Al hard with some home truths before she apologises to him when she discovers he has been to his stepfather’s funeral.

As the pair talk about their feelings, they end up opening up about their families and a new bond is created between them.

Trying to offer some advice, the businessman explains to Chas she should be more honest with her mother about her feelings.

Al tells Chas she and her mother need to face the reality that Faith is going to die and this is going to be sooner rather than later.

Having been enemies for so long, the mother of three finally begins to see Al in a new light when he tells her they could be friends if she allowed it.

The bar manager thanks the businessman for all his help and support, although she does still keep up a tough exterior.

Knowing she needs to find out more about him, Chas attempts to get him to open up and when she does, they feel more comfortable with one another.

It will be clear to viewers there is undeniable chemistry between them and things are looking more and more intense.

Hard to know where that boundary was

Later in the week, Chas decides she wants to forget about everything that’s going on and contacts her newfound friend.

The pair share a bottle of wine together as the bar manager talks about the stories she has of Faith from when she was younger.

As she prepares to leave to go home, Chas stumbles onto the businessman and the two characters end up kissing passionately.

It’s not known if this will turn into a full-blown affair, but if it does, the pair will want to keep it a secret as they both have other halves.

Whereas Chas is married to Paddy, Al has begun developing a relationship with Kerry Wyatt (Laura Norton), who he promised he would never cheat on.

In the world of soaps, however, secrets and affairs don’t stay harboured for long and at some point, it will all come out.

When it does, the two characters will be public enemies number one and two as their partners and families turn on them.

Knowing they need to take the heat, the two villagers will expect what they have done is wrong but they couldn’t resist each other.

With bridges burned and it seeming as if there is no way back, the pair could make plans to leave the village for good.

However, will Paddy let his wife leave and destroy their family in the process or will he forgive her, knowing they need to spend time working on their relationship?

If a double exit were to air, two of the biggest characters of recent times would leave a massive hole in the show with their departure.

With their relationship being teased for years, it would seem viewers will have finally got a conclusion to the storyline.

Speaking about the betrayal twist next week, the actress who plays Chas, Lucy, explains it was always going to happen in an interview with Express.co.uk and other media.

The soap star said: “I think our characters, after everything that happened when we nearly went there before, we’ve almost encouraged those kinds of looks in scenes.

“When we’ve been in The Woolpack there’s always been that love-to-hate relationship, and still that electricity, that little bit of fire.”

“It’s hard to know where that boundary was between flirtation or hatred, and there’s always that very fine line between ‘I fancy the pants off you’ and ‘I really hate you,'” she continued.

Lucy added: “It’s been niggling for a long time so it was either gonna niggle forever, or something was gonna happen to put it to bed so to say or not.”

The actor who plays Al, Michael, said: “She’s issued statements so many times, ‘stay away from me, stay away from my family’, but she still tolerates him.

“She still gives him the light of day even if the conversation is not particularly nice, she is still having that conversation with someone. He brings some of that fire out of her.”

Could this be the end for the two characters and will they sail off into the sunset?