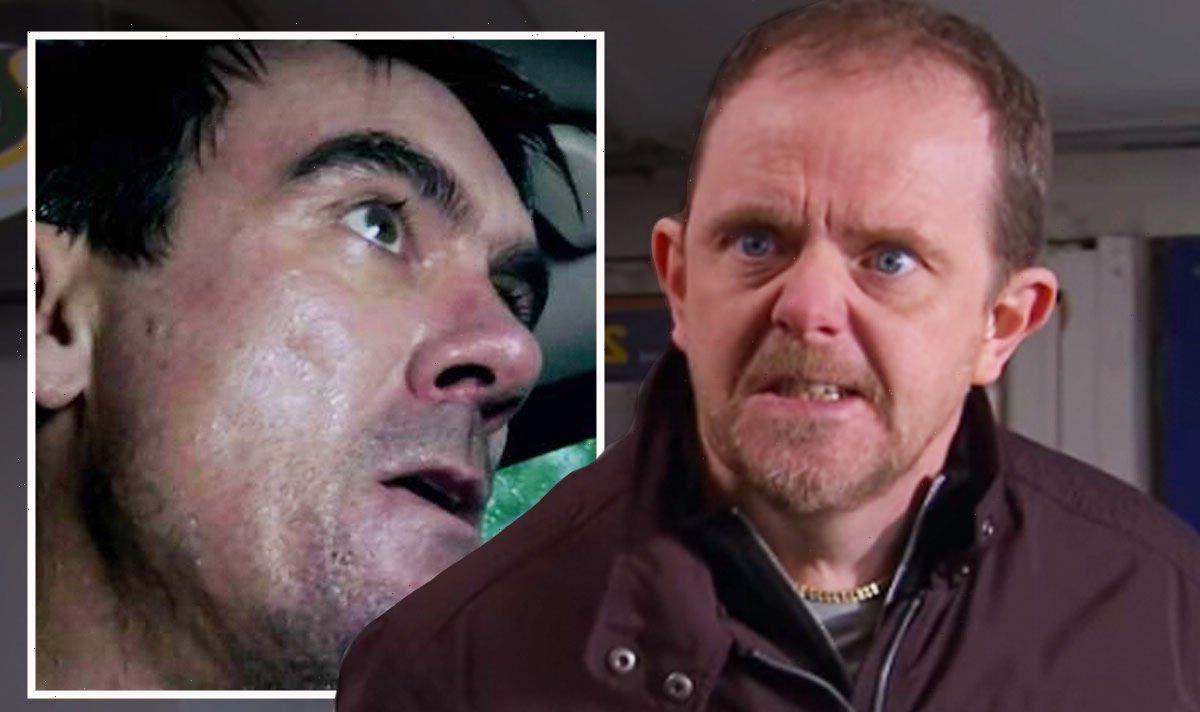 Emmerdale: Dan Spencer chats to Bob Hope in the kitchen

Dan (played by Liam Fox) seems to have made himself an enemy of the Dingle family yet again after sleeping with Faith (Sally Dexter) at the allotments in recent scenes on Emmerdale. It didn’t help matters the drunken pair were caught in the act by Cain Dingle (Jeff Hordley), who didn’t waste any time in telling his family what the matriarch of the clan had been up to. After an explosive set of episodes from the ITV soap this week, it seems life is going to be very different in the village moving forward and Dan’s death could be a part of this if Cain finds himself losing control in the aftermath of the car crash.

Amelia Spencer’s (Daisy Campbell) uncle has been a figure in Cain’s life for many years, one as his brother in law when he married Chas Dingle (Lucy Pargeter) and more recently as his colleague at the garage.

The two men seem to have got on really well but the idea of Dan sleeping with his mother has been too much for Cain to comprehend.

This dalliance between the two characters led to the Dingle family blowing itself apart but the revelations of this week could see them come back together.

With Faith having discovered she has cancer and with Cain trying to get his head around the car crash, it seems they are going to have to work through the problems in their relationship.

Cain could be devastated at the prospect of losing his mother if he decides to give her another chance and he won’t want anyone interfering.

Knowing Dan was the person who set them back a couple of weeks and who Cain would see as a bad influence on his mother, he could decide to take action.

Always with a plan of revenge in his mind, the bad boy of the village could come up with a plan to kill Dan which wouldn’t lead the police to his door.

He knows it would have to be something related to work which the investigators would be able to rule out as an accidental death.

Of course, Dan’s deadly exit from the show would leave many heartbroken, including his niece Amelia and his former love interest, Kerry Wyatt (Laura Norton).

Having developed somewhat of a feud with the Dingles, Amelia might point the police in their direction, believing they had something to do with it.

But will the police arrest the right person or will Cain manage to somehow get away with murder, letting another one of his family take the wrap?

Over the past couple of years, Cain has developed a habit of wanting to kill people without actually going through with it.

This has happened in the case of Joe Tate (Ned Porteous) and the several attempts he made to get revenge on Al Chapman (Michael Wildman).

Dan is the least suspecting person viewers would think Cain could actually kill but this is what could make the twist all the more surprising.

After 11 years of living in the Dales, it could finally be time for the beloved villager to bid a tragic farewell to his loved ones.

The actor who plays Cain, Jeff, teased how his character will develop a grudge against Dan in light of his moment of passion with Faith.

“It was a fun but tough scene to film because from my point of view, Cain is absolutely gobsmacked that this has happened.

“He is really hurting and this is the start of him really wanting to wash his hands of Faith,” the actor continued.

Although he didn’t explicitly state how Cain will handle being around Dan in the future, the fact his character is “hurting” gives Cain enough motive to want blood.

In Cain’s eyes, no one does anything which disrespects him or his family and Dan is someone who has crossed those lines massively.

The producer for the show, Laura Shaw, also spoke about how there will be a special episode coming up for Cain and Chas in the near future.

Laura said: “Cain and Chas are our most loved sibling pairing. They have a lot going on as Faith’s secret from the big week will impact them.

“We’re about to start shooting a special episode that made me cry.

“It explores more of their rich history and how their upbringing hugely affects the decisions they make in the present.

“Beyond this, we will certainly see that not all the decisions are good ones,” she added.

This is another hint Cain could possibly take his anger and emotions from learning Faith has cancer out on Dan in the most brutal way.

If he does end up killing Dan, he could live to regret his actions as Cain knows he never wanted to cross the line of murdering someone.

Especially someone who was a father figure themselves and Dan’s death would leave Amelia with very little family left to support her.

Will Cain begin to develop a bond with the young woman and become a new father figure for her as his guilt over Dan eats him up?