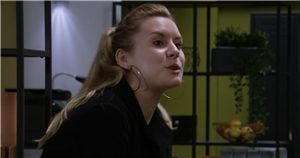 Emmerdale fans were left fretting for Dawn Taylor on Wednesday evening, after Jamie Tate appeared to have been "confirmed" as his mum's mystery poisoner.

On Monday, Jamie spoke to vet Paddy about diazepam pills going missing from the stables – the same pills being used to poison Kim.

And as Kim set up a hidden camera and lured former flame Will Taylor to her home in an attempt to prove he was the poisoner, Jamie was watching through the camera hidden in the horse's head.

But fans are convinced he's up to something – and they're particularly worried for his girlfriend, Dawn.

"#Emmerdale if Jamie can even drug his own mother then what will he do to Dawn if she doesn't toe the line? She really needs to listen to Will!" one quickly posted on Twitter.

"Dawn needs to be careful!" someone else warned, as a fourth penned: "If only Dawn knew of Jamie's true intentions!"

Later, Dawn popped in while Jamie was studying the footage on his laptop to demand they make a dinner date – and reckoned he'd been looking at something a lot naughtier than his mum's scheming.

Fans became convinced of Jamie's devilish intentions after the chat with Paddy, but they aren't entirely convinced Kim is ignorant of his own plan, as they're pretty sure she could be "spinning him a yarn".

One social media user wrote: "I wonder if Kim is double crossing Jamie as we speak!"

As another said: "I think Kim is setting Jamie up. We don't know what happened when Jamie closed the laptop to talk to Dawn. She could be double bluffing him."

With Kim promising to leave her business empire to her son, a third fan echoed: "Kim's too smart for Jamie. She would rather leave her money to Battersea Dogs Home."

Jamie was later rushed away from work by what seemed to be a frantic phone call, and he arrived back at Home Farm to find his mum lying lifeless on the floor, with the police in attendance.

Will was apparently placed "under caution" by officers – but fans are still convinced it's all a set-up.

"Kim lifeless on the floor I'm actually in hysterics!" one fan giggled. "This is such a set-up!"

Someone else added: "She knows it's Jamie and this is staged!", as a third echoed: "I get the feeling there's an almighty twist coming!"