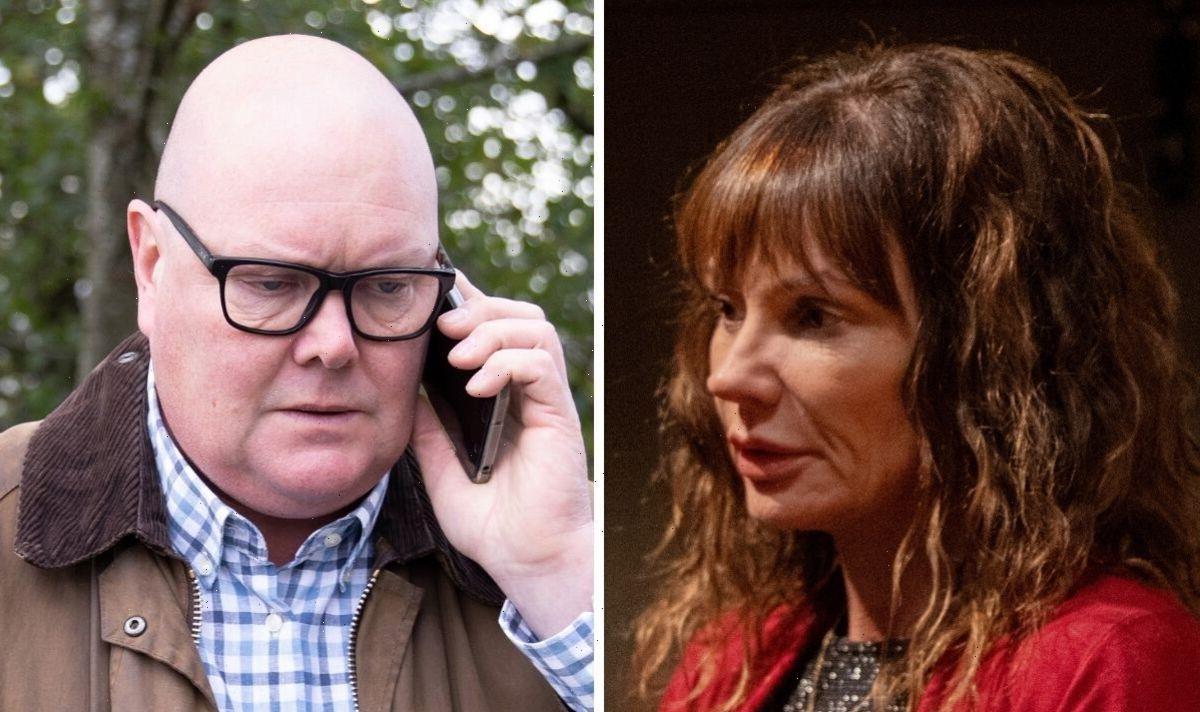 Emmerdale: Moira Dingle asks Caleb for help outside the Woolpack

ITV soap Emmerdale has recently seen a major storyline begin to unfold after the murder of Al Chapman (played by Michael Wildman). Cain Dingle (Jeff Hordley) is currently in prison serving time for the murder but is covering for his son Kyle Winchester (Huey Quinn) who accidentally shot Al. However, eagle-eyed fans have recently realised that Chas Dingle (Lucy Parteger) has been missing for the past week.

Over the last couple of months, the Dingle clan haven’t had the best time, with Chas’ affair with Al being exposed.

Chas and Cain have also had to contend with the return of their long-lost brother Caleb Milligan (William Ash), growing close to the family.

He has recently vowed to help Kyle out of the charges with the assistance of one of his lawyer friends.

However, as the Dingle drama continues to unfold, many fans have begun to question where Chas has disappeared too, especially since she and Paddy Dingle (Dominic Brunt) have been warring over parental duties with Eve Dingle (Bella James

Taking to Twitter to express their concerns, Matthew Chapman exclaimed: “An entire week without Chas! (since last Monday) – I bet it won’t last!”

@MickJohnPNEFC wrote: “Just in case anyone is missing Chas #emmerdale,” alongside an image of the character.

@LinziGlenOLD asked: “Anyone concerned as to where Chas has gotten too? She seems to have just disappeared… missing… POOF!” (sic)

Paddy was left devastated when he found out Chas had been having an affair with Al for months.

He recently opened up about filming the scenes and admitted he has found them quite “uncomfortable” at the moment.

He told Loose Women: “It was uncomfortable because Lucy is my friend and screaming in her face is not very nice.

“Anybody who comes there always says they didn’t expect it was going to be like this. I arrived 26 years ago expecting that I would find out all the cliques and politics, but it never arrived.”

Lucy Pargeter also opened up about the Al and Chas storyline and admitted it has been one of the most hated storylines to date.

She explained: “People are really, really not liking them together and you have got the cheerleaders for Al and Chas.

“I hate what she’s doing. We were never gonna win people over to Al and Chas when Paddy was involved.”

In upcoming scenes, at Butler’s farm, Moira Dingle (Natalie J Robb) is confronted by the police and at Jacob’s Fold, Mackenzie Boyd’s (Lawrence Robb) alarmed when the police want to take him to the station to answer some questions.

Whilst in his interview, Mackenzie’s tight-lipped when DS Malik presses him for information on Kyle before Matty Barton (Ash Palmisciano) is rattled when DS Malik reminds him of the serious consequences of perverting the course of justice.

DS Malik soon arrives at Butler’s, to bring an anxious Kyle back in for questioning, but things take a turn for the worse. At the police station, Kyle reaffirms that it was he who killed Al.