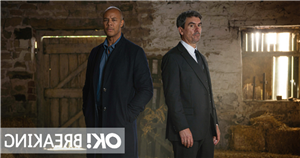 Emmerdale confirmed who was killed on Tuesday night after Cain Dingle and Al Chapman's violent gun showdown on Monday.

To which Cain, who was filled with a mixture of anger and grief, used the phone to set a trap for Al.

After thinking he was meeting Chas, Al was left confused to meet a steely Cain complete with shotgun.

At the same time, Chas realised that Cain had found her burner phone as she feared the worse and she was right as her brother held Al at gunpoint.

During the confrontation, Cain revealed that the gun was only to get his attention and prepared to fight Al.

Cain and Al began to fight it out before both their gazes fell upon the shotgun lying nearby as they both fought to reach it.

And during Tuesday's episode, it was revealed that Al had been hit by the bullet and had died as his lifeless body was discovered by partner Kerry Wyatt after she heard the shot.

Spotting Cain at the scene of the crime while holding the gun, she asked: "Oh my God, what have you done?" as he replied: "Nothing, it's not what it looks like" as he immediately fled the crime scene

Later, Kerry told the police in a statement that she caught Cain killing Al as she warned: "Cain's going to pay for what he's done, believe me…"

While Cain arrived home as he told wife Moira Dingle things were a "mess" before armed police turned up at the house and he said his goodbyes before handing himself in.

As Cain was arrested, Chas showed up and realised something had happened, as she overheard that her brother had allegedly murdered Al. She then went onto the pub to tell her family the news.

At the police station, Kerry gave her statement, recalling all the past fights Cain and Al have had while Cain lied to the police, pretending he stumbled upon Al's body.

The episode ended with the village reeling over the shocking news while Cain was officially charged with the murder of Al.