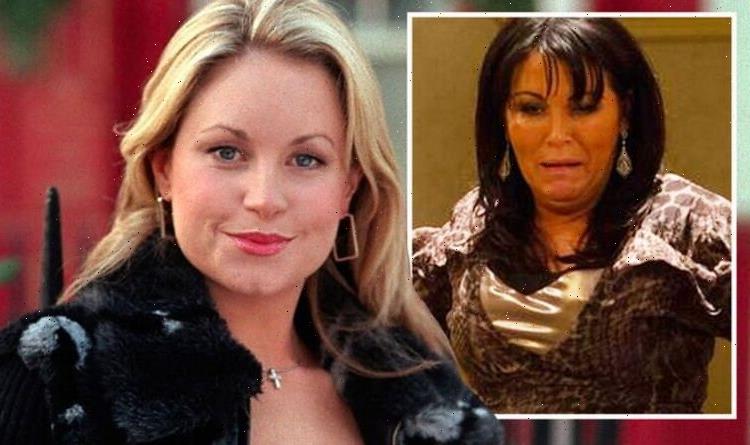 Sam (played by Kim Medcalf) has been absent from the drama on EastEnders for six years but as part of a huge new storyline for the Mitchell family, she is being brought back and viewers will want to know what she has been up to during her time away from Walford. It seems the troublesome character will have a lot of feuds to try and bury as she comes face to face with the likes of her son’s father, Jack Branning (Scott Maslen), and Phil’s (Steve McFadden) ex-wife, Sharon Watts (Letitia Dean). However, one person she might not expect to be involved with is Kat (Jessie Wallace) and vice versa but the latter could be central to a big secret Sam has been hiding on the BBC soap.

It’s been confirmed by bosses of the weeknight serial drama Sam will be back on the Square in less than two weeks’ time.

Sam will touch back down in Walford on Tuesday April 19, 2022, and it won’t be long until she is back in the thick of the drama.

Not much has been revealed about what the beloved character will be up to but she might have had an influence on recent events without viewers even realising.

After Phil was put in jail earlier this year, Kat has been taking on some of his business interests, which have included some seriously dodgy dealings.

One of the desmans made of her was to receive a package which contained a gun and she had to hold on to it until she got her next message from whoever was working with Phil.

The identity of this person has been kept under wraps so far, with Kat simply interacting with the people making the deliveries.

It’s fair to say she is not happy with whoever is behind the mask as her children and family have been put in danger by having the gun in the house.

When Sam arrives back home, her first port of call could be to visit Kat as she will want to explain her part in recent events.

Although the two women have history, what with Sam and Kat’s daughter Zoe Slater (Michelle Ryan) being implicated in the murder of Den Watts (Leslie Grantham), they will try to get past the frosty atmosphere.

Sam might not help matters, however, when she reveals her secret she is the person who has been making orders to Kat.

Long wanted to bring Sam back

Furious to discover the part Sam played in putting her family in danger, she will want nothing to do with Phil’s sister.

However, as she is in deep with the criminal network now, Kat might have no choice but to follow through with Sam’s next request.

First-look images of Sam’s return show her with her feet firmly back on the Square with a suitcase and a mysterious bag positioned alongside her.

It could be the mysterious bag that Sam ends up giving to Kat to hold on to for her until the time she needs it.

Having already done her fair share of dodgy dealings, the mother of five will try to put her foot down and refuse to help.

Unfortunately, Sam could make a horrifying threat to Kat that if she doesn’t do as she is told, her life with Phil will be over in the blink of an eye.

Having enjoyed a life of luxury and now with her own business in hand, Kat wouldn’t want this to all be undone because she put up a fight with Sam.

Reluctantly, Kat could agree to Sam’s new terms but just how much danger will she have put the Slaters in by hiding the mysterious bag?

It could be not even Phil knows his sister’s secret as he thinks he will have been dealing with a very different associate.

But as he puts the pieces of the puzzle together, will he warn his partner to stay as far away from Sam as possible?

The iconic character is being reintroduced by the head of continuing drama for the BBC and current serving executive producer, Kate Oates.

Speaking of bringing Sam back to EastEnders, the soap boss said: “The Mitchells are one of the most iconic families in soap, and I have long wanted to bring Sam back into the family fold.

“With Phil potentially facing a long spell inside, Sam arrives back in Walford ready to take what she sees as her rightful place in the Mitchell empire.

“But with strong grudges against Kat, Sharon, Jack and Denise, to name but a few, her return is guaranteed to be explosive.”

Will Sam take her place as the head of the Mitchell empire or will her secret see her put behind bars with her brother?

Taking to Twitter, fans have been sharing their response to the first look at the character’s return, with Walford Central writing: “This is just so exciting to hear!

“I know it’s stating the obvious but we are so fortunate as fans to have the likes of Sharon, Janine [Butcher], Sam, Kat, Stacey [Slater] all on the Square together right now #EastEnders.”

David added: “I suspected from the off that there was going to be big stories for Sam as they’ve kept quiet about it until now #EastEnders.”

Chelsea commented: “Sam returns to Walford the week commencing 18th April. Beyond excited to see my favourite back on screen again.”

EastEnders airs Monday to Thursday at 7:30pm on BBC One.