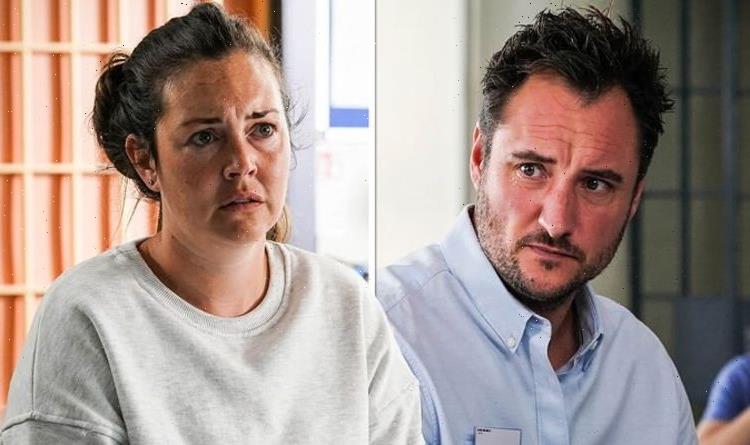 BBC soap fans have been keeping a close eye on EastEnders’ Ruby Allen (played by Louisa Lytton) in recent weeks. She was recently warned by Jean Slater (Gillian Wright) to tell Martin Fowler (James Bye) the truth about her framing Stacey Slater (Lacey Turner). Ruby’s desperate to keep her marriage together, but if the truth comes out, could Martin end up leaving her for good? If so, he may end up falling for his ex-wife Stacey once again.

Stacey is currently in prison after Ruby accused her of pushing her down the stairs and causing her miscarriage.

Unbeknownst to Martin, Stacey, and Jean, Ruby had already lost her baby and lied in order to keep her husband to herself.

Stacey tried desperately to prove her innocence to the police, but Ruby deleted the CCTV footage that showed she didn’t push her.

Realising she was facing 12 months in prison and had no way to prove her innocence, Stacey eventually pleaded guilty to assault in an attempt to get a shorter sentence.

She exited the Square and was sent to prison in April 2021, but had an emotional moment with Martin before she left.

As Stacey made her goodbyes, she had a showdown with her ex-husband, Martin, and told him she knows he still loves her.

Recently on the soap, tensions have risen as Ruby confessed everything to Jean.

The club owner could soon get her comeuppance in upcoming scenes, as Jean returns to Walford and realises she’s yet to tell Martin the truth.

When Jean bumps into Ruby, she announces her time is up and says she’s going to reveal everything to Martin.

Will Ruby’s lies finally be unveiled? And if so, how will Martin react when he discovers the truth?

Fans of the soap are keen to see the truth come out, with many hoping to soon see the back of Ruby as a result.

Some recently took to Twitter to discuss how her web of lies could soon be revealed.

One viewer wrote: “Loved Jean giving Ruby and ultimatum about coming clean to Martin I reckon now either him or Lily is going to overhear a conversation between them #eastenders.”

“With Ruby’s exit rapidly looming, could she be forced out of Walford permanently once everyone learns of her evil lies? Martin has had to take care of Stacey’s devastated kids since she imprisoned but he genuinely believed justice was being served #EastEnders,” another added.

“Even if Jean tells Martin about Ruby’s confession, it’s her word against Ruby’s. I’m curious to see how this works out. #EastEnders,” a third remarked.

A fourth commented: “Seeing Martin and Ruby together actually annoys me. I thought he genuinely loved Stacy. #EastEnders.”

The pictures from the upcoming EastEnders scenes show Stacey is far from impressed when Martin tells her about Ruby’s scheming.

If Martin does discover the truth about how Ruby framed Stacey, could he end up leaving her for good?

Martin could end up growing closer to his ex-wife Stacey if he finally ends things with Ruby.

Stacey and Martin tied the knot in 2016 and were married for a number of years before they eventually broke things off.

Their relationship came to an end after Martin cheated on Stacey with Ruby and later on with his ex-spouse Sonia Fowler (Natalie Cassidy).

Stacey also had a moment of infidelity herself as she cheated on Martin with Max Branning (Jake Wood).

EastEnders boss Kate Oates recently opened up about Ruby’s lies and hinted that the truth may soon come out.

She said: “So we’ve got Ruby, who Jean is intent on bringing down and clearing Stacey’s name.

“Ruby is going to come to a slightly sticky end,” Kate told The Sun.

If the truth comes out, will it drive Martin away from Ruby and closer to Stacey? Viewers will have to tune in to discover their fate.

EastEnders airs on BBC One on Mondays, Tuesdays, Thursdays and Fridays.