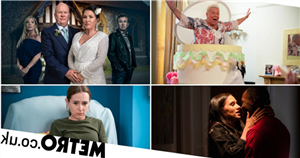 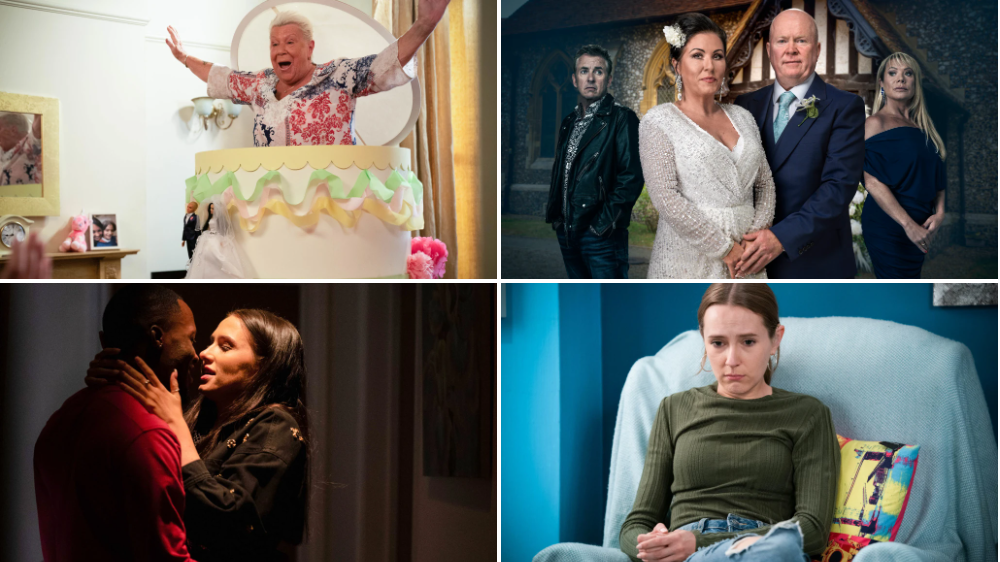 The wedding of Phil Mitchell (Steve McFadden) and Kat Slater (Jessie Wallace) has been a long awaited event – and in true EastEnders fashion, it will be thrown into chaos.

Alfie Moon (Shane Richie) is back, and immediately keen to win back Kat. And Sharon Watts (Letitia Dean) also reckons Phil is making a mistake – she wants him back.

Elsewhere, in the wake of her ordeal, Frankie Lewis (Rose Ayling-Ellis) is given bad news, and soon has a decision to make.

It’s the day of Kat and Phil’s wedding and Kat gets a shock when Mo turns up in typical Mo fashion. The market traders surprise Kat and Phil with a celebration but Kat’s excitement is short-lived when Shirley makes her doubt her future with Phil. After talking to Stacey, Kat lays her fears to rest but little does she know Sharon is on a mission to win Phil back.

After some encouragement from Zack, Sharon hands Phil an old photo of them, telling them how good they are together but her hopes of a reunion are dashed when Phil tells her he’s marrying Kat. As Sharon reels, Zack mishears a conversation involving Kat and assumes Phil has chosen Sharon, landing himself in it.

Raging, Kat storms over to challenge Phil who assures her he loves her, but Kat won’t let it rest and confronts Sharon. The two have a war of words but will Sharon listen to Kat and back off? Meanwhile, Tommy learns what Bert and Ernie have been up to and as Ben and Phil have a heart-to-heart, Tommy interrupts to break the news… Back home, Kat gets the shock of her life when Alfie arrives.

After forgetting to order a wedding car, Rocky frantically tries to find one with the help of Bobby and Harvey. Dotty helps to fix the disastrous car they’ve found but Jean is furious at the situation. Freddie offers to find a wedding hat for Janet to help Billy and steals the wedding car with Bobby in the back.

Mick enlists Lola’s help with encouraging Frankie to call the police about the man who harassed her and with Ben’s help, she eventually agrees. Mick supports her as she gives her statement to Jack.

Kat is less than pleased to see her ex. Alfie begs Kat to reconsider marrying Phil but a furious Kat puts him in his place. Phil arrives and squares up to Alfie but Kat assures Phil she’ll meet him ay the altar. Once Phil has left, Alfie tries his luck with Kat but she forces him to go.

Alfie arrives back at his canal boat and realises Bert and Ernie snuck in his van. As Kat reels to Stacey, Alfie calls her about the twins forcing her to go and fetch them making her late for the wedding. Kat arrives but the twins refuse to get off and the situation gets out of hand.

Alfie does all he can to convince her that marrying Phil is the wrong decision but will it be enough to change Kat’s mind?

Billy panics to learn what Freddie has done but he eventually returns with a hat for Janet. At the church, everyone anxiously waits for Kat’s arrival as Mo takes bets on whether or not the wedding will happen. At The Vic, Sharon, Kathy and Shirley toast to no longer being with Phil but when Sharon learns Kat is a no show, she gets an idea…

Frankie is disgruntled when Jack tells her that getting a conviction will be hard leaving Mick feeling helpless. She later spots Nugget and Denzel interact with an uncomfortable Amy increasing her rage even more. Linda tries to offer her support. Dotty and Finlay bond over their fathers and he invites her for a drink. Vinny spots them leaving together and is gutted.

With Kat still a no show for her wedding, the atmosphere at the church grows awkward as Phil anxiously waits for news on her whereabouts. Sharon gets wind of what’s happening and arrives at the church for a final attempt to reunite with Phil. As Alfie tries his hardest to reunite with Kat, Sharon tries to convince Phil that he’s marrying the wrong woman. Will Sharon and Alfie get their way or will Kat and Phil finally tie the knot?

Lola spots a despondent looking Frankie and takes her to get some food. At Walford East, they are hassled by a bunch of guys and Ravi steps in to shut them down. Frankie is left even more unsettled and when Lola rants about certain behaviours in some men, Frankie feels buoyed on to stand up for women.

At the café, she finds Amy who is with Jack and apologises for not stepping in when Denzel and Nugget were harassing her leaving Jack furious.

Vinny grows jealous of Finlay’s friendship with Dotty and as the tension grows, Vinny punches him. Ash offers some reassuring words to Vinny and he tries to call Dotty, unaware Dotty and Finlay are sleeping together.

Dotty begins the walk of shame but is immediately discovered by Bernie who encourages her to be honest with Vinny. Rocky sees Dotty contemplating and despite not knowing the situation, offers similar advice.

Dotty tells Vinny what happened leaving him devastated and Finlay intervenes but only makes the situation worse.

Vinny throws Dotty out the house At work, Frankie formally pulls Denzel and Nugget up on their behaviour towards Amy. Frankie thanks Linda for her support, she did the right thing standing up for Amy.