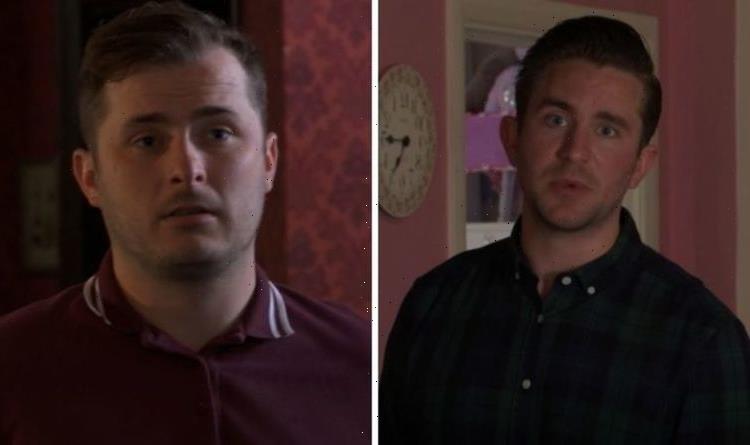 EastEnders: Frankie Lewis knocks down Nancy with her car

Paul (played by Jonny Labey) was killed in 2016 after he and Ben were targets of a homophobic attack. Although troubled EastEnders resident Ben has now moved on and is married to Callum Highway (Tony Clay), he has been reliving the brutal incident since he discovered last week the person responsible for Paul’s death, Simon Atmore, was being released from prison and allowed back into society. Never one to miss an opportunity for revenge, the BBC soap is set to show scenes of Ben trying to track down Simon. And as Callum tries to talk him out of it, Ben manages to find his old enemy – will he murder Paul’s killer before anyone can stop him?

In upcoming scenes, Callum is looking at a piece of paper with the details of Simon, the person that killed Ben’s former lover Paul.

He realises Ben is in an agitated state, so he decides to keep the details to himself.

Back at home, Ben is rummaging through Callum’s things, and finds the paper with the details.

As Callum returns home, he realises to his horror that Ben has made a plan to meet with Simon.

Could he be planning to attack Simon, knowing he will be alone with no help this time?

Callum pleads with his husband to rationalise, but it’s clear Ben will do anything to get revenge.

A desperate Callum tells Ben’s gangster dad Phil Mitchell (Steve McFadden) that he got the number of Paul’s killer, and he needs his help.

Not letting his pride get to him following his argument with Ben, Phil tells Callum to sort it out on his own.

Meanwhile, Simon stares at the gym waiting for the probation officer and immediately realises something is wrong as he steps back into the alley.

Has Ben tricked him into meeting in a remote place so he can launch an attack?

It’s likely that Ben will initially be hoping for some kind of answers in attempts to cope with his grief, but things will probably become heated.

Perhaps once Ben is face to face with Paul’s killer again he will be unable to control his rage and attack Simon.

Ben has murdered before and served time in prison for the killing of Heather Trott (Cheryl Fergison) when he was a teenager.

With old feelings and heartbreak brought to the surface by Simon’s release, and feeling Paul hasn’t received any justice, it’s possible Ben could get very violent towards Simon and could hurt him enough to kill him.

It’s likely he is able to convince Phil to help him stop Ben once he emphasises how much trouble Ben could be in.

The two might rush to the scene and find Ben walking away from Simon’s body – but will they hep Ben cover up the murder?

Phil and his son haven’t been getting on lately, but in the past, he has always tried to protect Ben.

But as a police officer, Callum will be left in a difficult position. He was willing to leave the force for Ben though, so he may decide to prioritise his relationship with Ben over his job.

But this will see the three men mixed up in a very serious crime, which could have disastrous consequences for them all.

And with Kat Slater (Jessie Wallace) making Phil promise not to get involved with any more criminal activity before they got into a relationship, the incident could see the couple break up before they’ve even started.

But Walford gangster Phil knows how to conceal the truth and cover his tracks, so could the secret be kept for a long time?

With Callum in the police, he might be able to help bury the truth from the inside.

But will he be able to live a lie, jeopardising his career and his life?

EastEnders continues on Thursday at 7.30pm on BBC One.