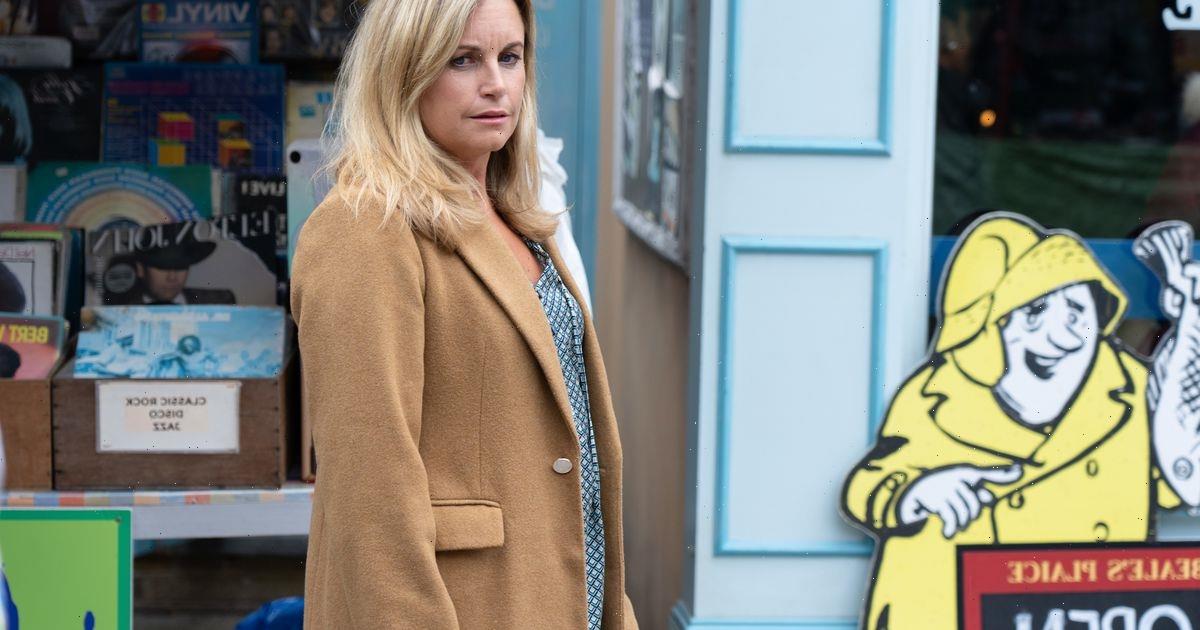 EastEnders fans suspect Sam Mitchell has a secret past as her thug ex-boyfriend hinted that she has a different identity.

Viewers recently saw Sam’s ex Don turn up demanding his mum’s wedding ring back that Sam stole, while professing his love for her.

He immediately addressed Sam as Marilyn, leaving fans confused as to why he knows her by a different name.

Another asked: “Why is Don calling Sam Marilyn?”

While a third penned: “Sam probably has a secret identity as whoever this Marilyn is!! Wouldn’t put it past her!”

Tonight’s episode saw Don putting on an extravagant display and Sam is left speechless when he proposes to her dressed Zorrow Infront of the whole square.

Taken aback, she drags him inside Peggy’s and tells him she can’t marry him.

He threatens to burn down Peggy’s and show her his crazy side if she doesn’t give him a good reason.

Thinking on the spot, Sam tell him she is pregnant with her boyfriend.

As the two are talking, Zack walks in and Sam introduces him as her boyfriend and the father of his child.

Zack is dumbfounded when Sam says he’s the father.

After a brief showdown, which sees hunky Zack show off his rock hard abs, Don tells Sam to keep the ring and leaves.

Zack questions if she’s really pregnant and is relieved to hear she isn’t before they are seen passionately kissing.

Elsewhere in the episode, Ravi admits that he was in on the plot with Nina but he now wants to be part of the Panesars and warns them that Nina has a USB with footage of Suki killing Ranveer.

Ash gets a suspicious text from Kheerat and tries to stop Nina from leaving the surgery but the two brawl and exchange punches.

Ravi and Kheerat arrive and manage to get the USB from Nina, telling her to leave but before she goes, she shares some unforgiving words and tells them that Ravi killed Ranveer.

Back at the house, Ravi covers and says Nina was setting him up.

They are distracted when the solicitor arrived with some news – Suki could be home soon – but the police are looking for evidence on her laptop causing Ravi’s stomach to turn.

Outside, the solicitor gives Kheerat letters from Suki for him and Eve.

When he returns, he is rocked to his core to learn there is a copy of the incriminating footage on Suki’s laptop.

Desperate to protect his mum, Kheerat visits Eve and asks if Suki could come home if he lies and says he killed Ranveer.

EastEnders airs at 7.30pm Monday to Thursday on BBC One and BBC iPlayer.