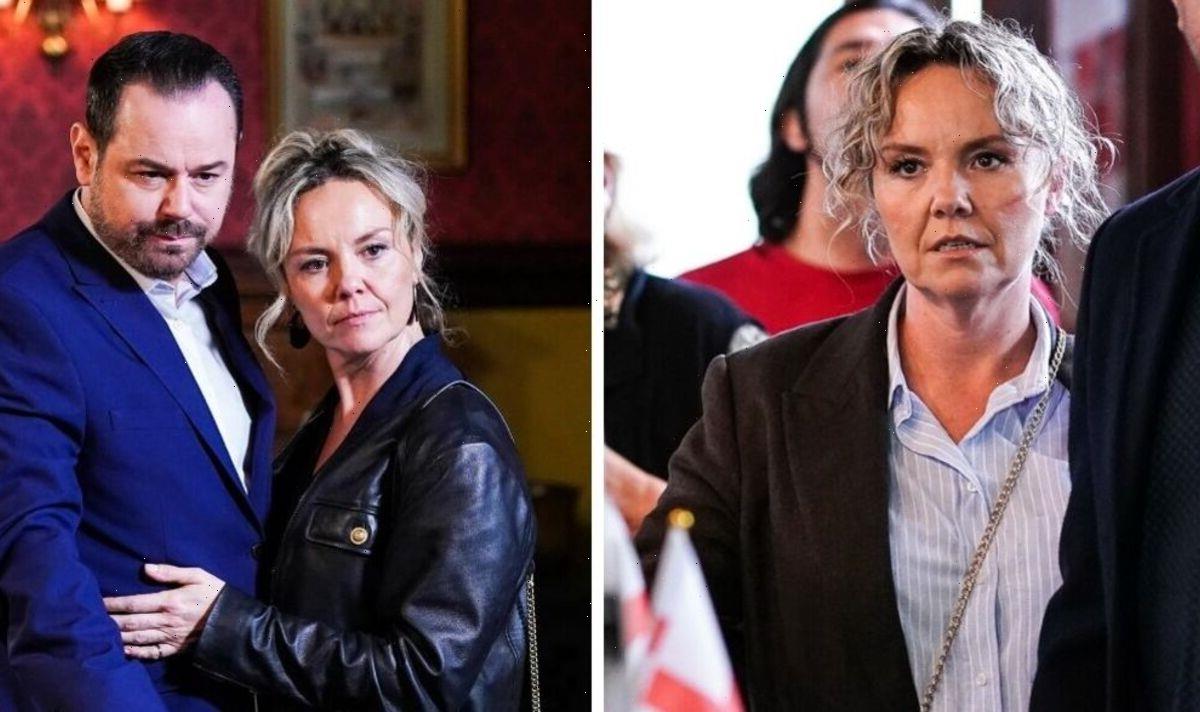 Janine (played by Charlie Brooks) recently discovered she was pregnant with Mick’s (Danny Dyer) baby and has been very vocal about the news ever since. She’s certain the baby news has secured her relationship with the Vic landlord Mick, but his history with EastEnders favourite Linda (Kellie Bright) runs deep, and it’s clear Janine is consumed with jealousy. In upcoming scenes on the BBC soap, scheming Janine decides to keep something from the father of her child.

With Linda worried about the consequences of missing her probation appointment, close friend Sharon Watts (Letitia Dean) begs Mick to step in and explain to Murray where she had been.

A furious Janine is upset to learn Mick has once again been with Linda and drops some upsetting news on him.

Mick later relays this to Sonia, who immediately clocks Janine is lying.

After confronting her, she threatens to tell Mick the truth.

Janine manages to stop her, but a suspicious Shirley Carter (Linda Henry) overhears and is intrigued.

Janine later assures Sonia she’ll tell Mick eventually, but Mick overhears their conversation – how much does he know?

Janine panics as Mick questions what she’s keeping from him.

Elsewhere, Linda thanks Mick for his support of Murray and they share a touching moment.

Sharon reveals the date who stood Linda up a couple of weeks ago, Karl, was actually due to a miscommunication and he’d like to see her.

Mick rallies his ex-wife on, but a jealous Janine interrupts.

Shirley sees straight through the manipulative landlady and when they’re alone, she calls her out for her lies.

Janine’s mood darkens even more and a worried Sonia makes a mystery call.

Janine’s paranoia about Mick and Linda festers and when Sonia catches her spying on them, she assures her it’s all in her mind.

Linda prepares for her date with Karl but confides in Mick about a concern playing on her mind.

At Walford East, the date is off to a great start but things take a turn when Mick and Janine turn up.

Janine begins to suspect that Mick knew Linda was there, while Karl questions Linda about who Mick is.

Janine fumes to Sonia about the incident, and Sonia continues to promise her that Mick loves her and that Linda is out of the picture.

As everyone prepares for the Christmas lights party at The Vic, Janine remains determined to cement herself into Mick’s life but receives a devastating blow.

What could Janine be keeping from Mick? It’s possible that, in an attempt to secure some attention from him and distract him from Linda, she may have made up something about their unborn baby.

The pair have recently had their 12-week scan to ensure everything is running smoothly with the pregnancy, so perhaps Janine pretends something is wrong.

Could the wicked lie come back to bite her though if the news she receives later is in fact a serious update regarding the baby?

It could be that Janine may have lost the baby, but will she tell Mick?

Knowing Mick is a committed family man, Janine has established that the baby will probably ensure he sticks around instead of going back to Linda.

Building on her lies, she might decide not to tell Mick whatever the devastating news was.

Will the secret eventually come out? EastEnders fans know Mick is leaving the show towards the end of the year – could Janine’s lies be building up to a dramatic exit for the beloved character?

It would be typical of nasty Janine to try to keep her relationship going through a series of lies, but could the consequences be more fatal than she could have predicted?

EastEnders continues on Tuesday at 7.30pm on BBC One.