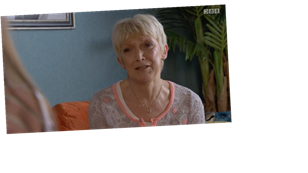 Breaking into Ruby’s house while she was in the shower, Jean told a shocked Ruby her cancer had not only returned, but it was terminal, in a bid to save Stacey from prison – and some viewers feared it was a lie.

Initially, a stunned Ruby was dubious herself, but Jean insisted she may have started stealing but she has not turned into a liar.

The heart-wrenching scenes continued as Jean opened up and bared her heart to the younger woman, sharing how she wants to see her grandchildren grow up and Stacey "safe and secure".

Jean even admitted she hadn’t told her daughter yet, as she said: "Stacey doesn’t know – I can’t bring myself to tell her. There’s been so much upset and tears in our house recently."

But while Ruby was horrified and urged Jean to have treatment as she’d managed to beat her cancer before, Stacey’s mum simply said there was "no point fighting a battle you can’t win".

Sobbing, Jean finished: "All I want, all I need – is to have the time that I’ve got left and then when I go I really need Stacey by my side.

While some fans were in tears at Gillian’s incredible acting skills, plenty others feared Jean was simply trying to push Ruby to drop the charges she made against Stacey.

A second added: "Is it bad I'm hoping Jean is lying?! #EastEnders."

"Why isn't the hospital chasing Jean or getting in touch with the GP #EastEnders," a third queried, followed by: "Oh Jean! I hope it’s not true @bbceastenders #EastEnders."

"That last scene of Jean begging for Ruby to drop charges just broke me into tears. #EastEnders," another added.

EastEnders continues Thursday at 7.30pm on BBC One.