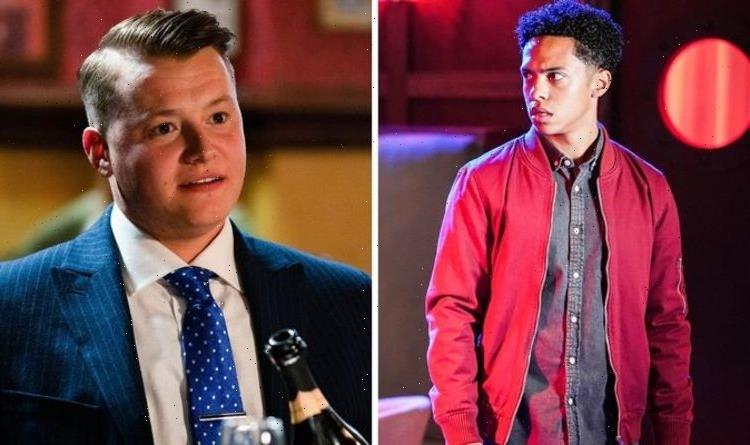 EastEnders: Woman tells Ash she doesn’t want to be treated by her

Aaron (played by Charlie Wernham) arrived in Walford last week as Harvey Monroe’s (Ross Boatman) wayward son. It’s clear he is involved with something shifty, as Tuesday’s episode of the BBC soap saw him coming home from “a job” and washing blood off his hands. The EastEnders bully wants to date Tiffany (Maisie Smith), but keeps letting her down, insisting he needs to “work”. Keegan (Zack Morris) doesn’t trust Aaron and will probably step in to prevent the pair from getting close – but will he end up putting his life in danger?

Tuesday’s instalment of the BBC soap saw Aaron pursuing Tiffany for another chance after he left abruptly during their date on Monday.

Meanwhile, Tiffany was considering trying to sort things out with Keegan.

She went to find him only to see him chatting to Dotty Cotton (Milly Zero), whom he had cheated on her with.

She assumed something was going on between the two, but Dotty was trying to convince Keegan not to give up on Tiffany.

“Are you and Tiffany going to work things out?” she asked.

“It’s too late for that, she’s moved on,” Keegan replied.

Dotty said: “No, she hasn’t. I overheard that creep at the bar last night on the phone to some other girl when he was meant to be with Tiff. She deserves better than that sleaze.”

But the misunderstanding led Tiffany to agree to another date with Aaron.

Once again though, he left during their dinner after his phone went off, explaining he had to go because of work.

While ominously washing blood off his hands, he told Harvey he’d be seeing Tiffany again.

Now that his darker side has been revealed, Aaron might stop at nothing to sabotage the chances of Tiffany and Keegan getting back together.

The violent man may even try to murder Keegan.

With Keegan finding out from Dotty that Tiffany’s new love interest is bad news, he will probably try to urge her to stay away from him.

Iqra Ahmed (Priya Davdra) approached Tiffany in The Vic to try to convince her Keegan still loves her.

“Look, this is none of my business, and I know what Keegan did to you was wrong,” She commented.

“You think?” Tiffany asked, frustrated. Iqra added: “Look, I’m sorry, it’s just I heard your brother this morning, I know he’s looking out for you but he doesn’t really know Keegan.”

“He knows what he did,” Tiffany replied.

“He would do anything to make things right with you – he still loves you.

“I shouldn’t have said anything, it’s just you two used to be really good together.”

Tiffany looked thoughtful as she considered this, and it seems she might be wanting to give her marriage another go.

With Tiffany and Keegan potentially getting back together, determined Aaron is bound to intervene.

Despite walking out on two dates with TIffany, he seems adamant that the pair will be together.

With his violent streak con display, he might turn to a dangerous way of keeping Keegan away from Tiffany.

Could Keegan make a grim exit from the Square at the hands of Aaron?

EastEnders continues on Thursday at 7.30pm on BBC One.