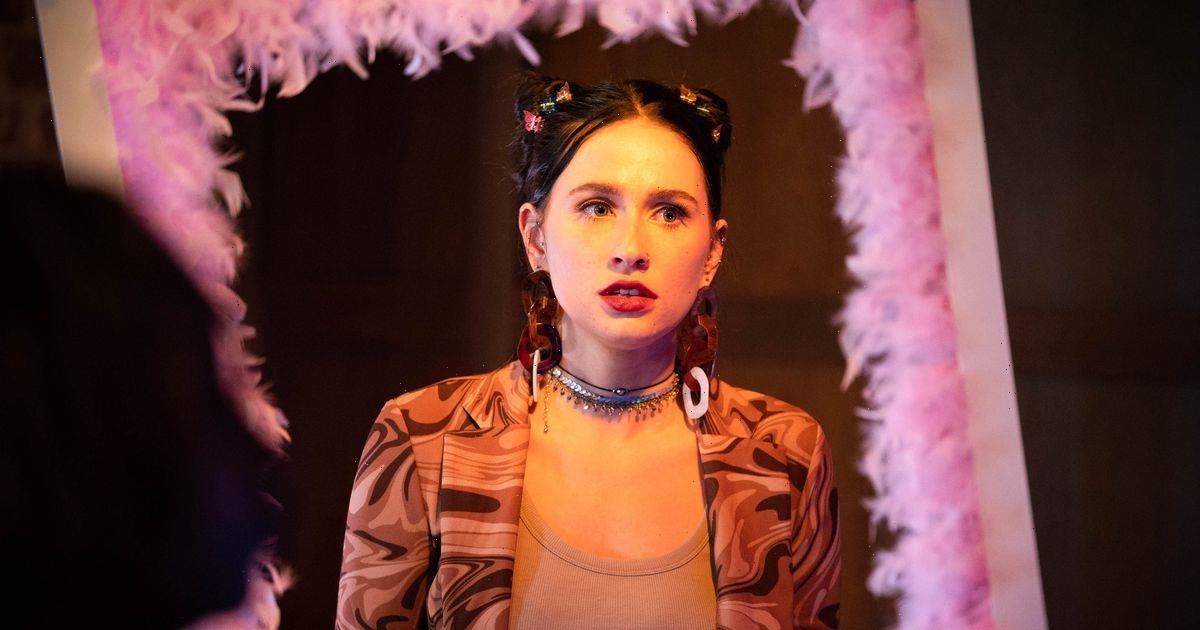 The mischievous teenager is stressed about her relaunch event at Ruby’s in upcoming scenes as she needs a DJ.

Rocky reassures her he has a plan to get money and asks Vinny to DJ, but he says no.

When Sonia Fowler (Natalie Cassidy) chases up Dotty for bill payment, Vinny (Shiv Jalota) takes pity and helps out after all but makes it clear that nothing has changed between them.

Rocky scores VIP invites for himself and Sonia to Dotty’s noughties event at the club by reminding her that she should be trying to impress Sonia.

Things take a turn when a drunk woman appears and Rocky’s face drops at the sight her.

Outside, Sonia finds the woman, who asks after Kirsty, and the penny drops.

She interrupts Dotty and the drunk woman reveals herself – it's Dotty’s mum Sandy.

She hurls abuse at Dotty and things later turn awkward between the mother and daughter.

Dotty invites Sandy for a chat later and Rocky insists that she’ll blow their cover.

Will Sandy's arrival in Walford ruin Dotty and Rocky's scheming plan to swindle money out of Sonia?

Fans of the BBC One soap were left gobsmacked last week as Terry Cant (Brian Conley) AKA Rocky was revealed as Dotty Cotton's dodgy uncle and not Sonia's father.

Rocky arrived in Walford earlier this year, claiming to be the estranged father of Sonia and they have since gotten to know each other.

He was recently arrested for scratching the car of Ethan, Sonia's new love interest, after he saw him cosying up to another woman in the club.

As he arrived at the police station he was questioned, and asked to give his real name with it soon confirmed he was not Terry at all.

But the real shock came when he announced his name to be Thomas Cotton, with it very clear he was instead related to Dotty Cotton.

As he was let go, Dotty was seen waiting for him outside and she soon scolded her 'Uncle Tom' for almost scuppering the plan against Sonia.

Rocky appeared to be remorseful for what he was doing to Sonia, causing Dotty to snap – and this was when their true link was finally made known.

Dotty confirmed that Tom, not Terry or Rocky, was in fact her uncle – possibly a sibling of her late villainous father Nick Cotton.

She reminded him that she should come first, as should their plan, and not Sonia seeing as though he isn't really her dad.

Dotty then confirmed what their plan was, revealing they are seeking a sort of revenge on Sonia because of Dotty's inheritance money from her grandmother Dot Cotton.

Sonia has been harbouring Dot's inheritance following her exit from Walford last year, with Dot giving her power of attorney back in April this year.

Dotty made it clear to Thomas that they need to focus on their plan, or they will be left with nothing.

Will they succeed or will Sandy tell Sonia everything?

EastEnders airs Monday, Tuesday, Thursday and Friday on BBC One

For more of the latest showbiz news from Daily Star, make sure you sign up for one of our newsletters here.