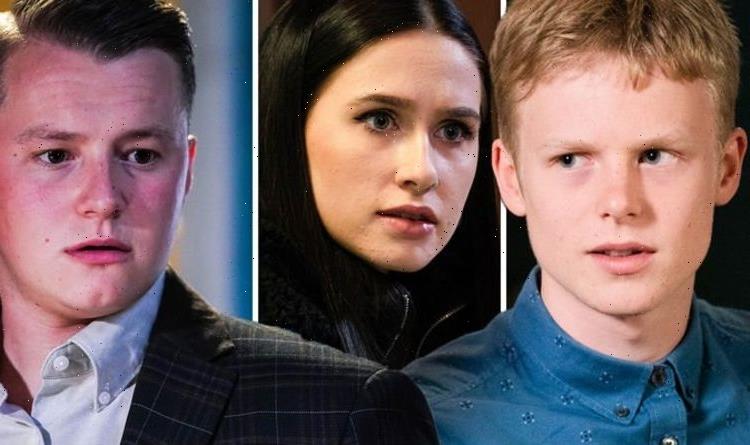 Dotty Cotton (played by Milly Zero) has been trying to con EastEnders’ Sonia Fowler (Natalie Cassidy) out of the money Dot Cotton (June Brown) entrusted to her with the help of Rocky Cant (Brian Conley). However, will she turn her attention away from her scam and onto romance after a chance encounter with an almost former flame?

In Thursday’s instalment of the BBC soap, Dotty lashed out at Bobby Beale (Clay Milner Russell) when he accidentally splashed water on her.

The Beale son was cleaning off the Nazi swastika Aaron Monroe (Charlie Wernham) painted on the site of the new Walford mosque.

“I’m sorry,” Bobby cried out as Dotty quipped: “What do you think you’re doing?”

However, when Dotty realised what he was doing she softened: “Cowards.”

Read more: EastEnders’ Gray Atkins to fake his death as he makes exit from soap?

“I wanted it gone before anyone else saw,” he explained.

“I guess I’ll let you off then, this time,” Dotty remarked.

Dotty is no stranger to lashing out and is usually unapologetic for her actions.

With Dotty feeling increasingly alone on the square could sparks have flown between the pair?

Last year, Bobby had a crush on Dotty but the club manager wasn’t interested.

She had her sights set on Peter Beale (Dayle Hudson) instead, leaving his younger brother crushed.

Currently in Walford, Bobby is in a relationship with Dana Monroe (Barbara Smith).

Although the pair are happy together, Bobby has no idea Aaron’s brother is behind the horrific graffiti.

As the family enjoyed a lunch prepared by Harvey, Aaron quizzed Bobby on Islam.

The religious resident was quick to respond calmly but how long before he realises Aaron is behind the recent spate of hate crimes?

Meanwhile, Harvey discovered his son was involved in a racially-motivated attack.

The cab driver swore he wouldn’t lie for his son and insisted a prison sentence might be what he needs to sort himself out.

However, when confronted by the police Harvey pretended his son had spent the night with him.

Aaron begged his dad to stick up for him and promised he had nothing to do with the attack himself.

But, the manipulative character was later seen telling someone on the phone he was pleased his dad lied for him.

He pointed out Harvey won’t be able to persuade Aaron to hand himself in because he would also be in trouble with the police for lying.

EastEnders airs on BBC One on Mondays, Tuesdays, Thursdays and Fridays.