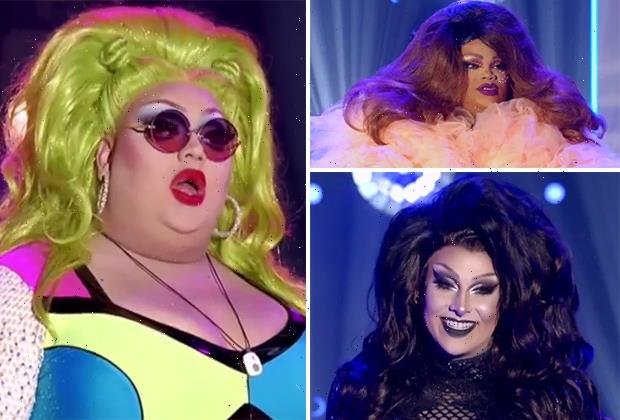 No, really, we’re asking: Which queen is returning to RuPaul’s Drag Race All Stars 6? Even after this week’s episode, we still don’t know.

The long-awaited “game within a game” finally arrived in Episode 10, and it turned out to be pretty much exactly what fans expected: an all-out lip sync smackdown — in fact, it was literally called RuPaul’s Secret Rudemption Lip Sync Smackdown — that would end with one of the eliminated queens returning to the competition. It was a real treat for those viewers who love watching queens they’ve already forgotten about competing for a chance to spout their catch phrases one last time before sashaying away all over again. In other news, this season has turned me into a cynical monster.

I’ll give Drag Race some credit here — the idea that this competition has (allegedly) been happening every week and that the remaining queens (allegedly) knew nothing about it is pretty cool. Still, Trinity summed up my thoughts from the jump: “This is a bunch of f–ing bulls–t.”

Read on for a breakdown of the battles:

ROUND 1 | SERENA CHACHA VS. JIGGLY CALIENTE
A lot has happened in our world — and on the show — in the past 10 weeks, so I’m fine admitting that I completely forgot either of these queens were ever part of the All Stars 6 cast. When Serena told Jiggly, “I didn’t have your vote,” my only thought was, “Sure, if you say so!” That said, En Vogue’s “Free Your Mind” was an excellent song to kick off this tournament of non-champions. Jiggly looked amazing, and Dixie Kong would have been very proud of the way she twirled that ponytail, but I expected Serena to win this one. The moves, the energy, it was all there! But Ru thought otherwise, opting to send Serena packing once again. Hey, what do I know?

ROUND 2 | JIGGLY VS. SILKY NUTMEG GANACHE
Still on a high from her big win, Jiggly returned to the stage to take on Silky, who walked out serving sexy church lady in a tight, leopard-printed number. In fact, both queens were rocking leopard print this week. (Side note: It recently came to my attention that the Cheetah Girls’ costumes almost always featured leopard print, not cheetah print, as their names would suggest. So depending on how old you are, your entire childhood could be a lie.) Anyway, this face-off was set to Cyndi Lauper’s “Girls Just Wanna Have Fun.” Silky’s idea of having fun was sensually removing her gloves, while Jiggly’s idea was sucking on a lollipop. Unfortunately, neither’s idea of having fun involved putting on an impressive lip sync. Still, Silky won the judges over with a funny routine in which she pulled drinks out of her cleavage. Sorry, Jiggly!

ROUND 3 | SILKY VS. YARA SOFIA
Remember when Yara was sent home because the judges felt she wasn’t giving Shakira “face” during the Super Bowl challenge? I still don’t know what that meant. But I digress. Expose’s “Point of No Return” provided the soundtrack for this third battle, which found Yara serving up a sexy performance… while Silky poured water on herself. I would have given this win to Yara, but alas, Ms. Sofia so rarely fits this show’s narrative.

ROUND 4 | SILKY VS. SCARLET ENVY
Scarlet came prepared for this Season 11 smackdown, dressed to impress in a sickening silver catsuit. She was fully selling the emotion of Cher’s “Song for the Lonely.” Like, full price. Unfortunately, her full commitment to the song was no match for Silky’s… flag twirling? Don’t get me wrong, it was fine twirling. Lovely twirling, even. But for this song? Once again, Ru and I have a difference of opinion, as Silky was declared the winner.

ROUND 5 | SILKY VS. A’KERIA C. DAVENPORT
Plot twist: A’keria was the only eliminated All Star who turned down Ru’s invitation to compete in this smackdown. “Y’all know I am a fighting bitch, but I’d much rather respectfully decline than have my world shattered again,” she said in a confessional. “I’m proud of what I did.” She concluded by saying that she already feels like she got a second chance by being able to apply what she learned this season to her drag career. “I did what I needed to do.” I’m actually really proud of A’keria for putting herself first. And I’m even more proud of Silky for insisting that she still perform solo. Well, mostly solo. Dressed as a man on one side and a woman on the other, Silky gave us both parts of Aqua’s “Barbie Girl,” and it was incredible. Let it be known: This is the moment I stopped rolling my eyes at Silky and started rooting for her.

ROUND 6 | SILKY VS. JAN
Dressed in all back, Jan certainly looked more prepared to tackle Pat Benatar’s “Heartbreaker” than Silky, who bounced onto the stage in the biggest, pinkest dress you ever did see. But at this point — and I can’t believe I’m about to say this — who are any of us to doubt Silky? The apparent lip sync assassin eclipsed Jan’s boundless energy with the reveal of a form-fitting jumpsuit and… a guitar?! (“How did this bitch get a guitar?!”) She even ended the battle by smashing that guitar to pieces, a move I’m sure Benatar would have supported. And if the previous lip sync turned me into a Silky fan, this battle did the same for Trinity. “Eeyore” was living for this performance.

ROUND 7 | SILKY VS. PANDORA BOXX
Unlike in Snatch Game of Love, Pandora was all sex in her performance of Ariana Grande’s “Focus.” The robe, the corset — it was very Lucy in Jekyll and Hyde. Meanwhile, Silky’s look was extremely (and curiously?) Grande appropriate. I was actually really impressed with Pandora’s work here, but she was simply no match for the momentum Silky had built up. Plus, no one falls to the floor on their back and wiggles around quite like Silky. It’s a very specific art, of which she’s basically Picasso.

FINAL ROUND | SILKY VS. EUREKA O’HARA
With Charli XCX on the judges panel for this one, it was the perfect opportunity to use her song “Vroom Vroom.” Unfortunately, that opportunity went unseized for the second time this season. Instead, we got Kelly Clarkson’s “Since You’ve Been Gone,” which is obviously still a jam. Coincidentally, both queens looked to their mothers for inspiration with this one — Silky told the story of her mom’s weight-loss journey, while Eureka performed with her late mother’s Life Alert device hanging around her neck. Despite Silky’s seemingly effortless wins up to this point, however, the six-time champ got sloppy. Not only did she take too long to reveal the glamorous look underneath her oversized suit, but she couldn’t even get the whole thing off. It was still stuck to her leg like toilet paper on the bottom of a shoe. Eureka didn’t necessarily blow me away, but it still seemed like Ru was leaning towards giving her the win.

Unfortunately, we’ll have to wait another week to find out whether Silky or Eureka is back in the game. My money’s on the Elephant Queen, even if that means we basically wasted an hour of our lives watching Silky compete in a lip sync tournament for no reason. Anyway, vote for the queen you’d like to return below, then drop a comment with your thoughts on this game within a game.