Bob Iger’s going to have to start taking out more congratulatory ads. As Disney inches closer to final approvals in its acquisition of 21st Century Fox’s production assets (and cable networks like FX), the conglom is about to become a TV awards juggernaut.

Much has been made about the success of Dana Walden as a programmer, as she takes over Disney Television Studios and ABC Entertainment as chairman — but as chairman of Fox TV Group, she and Gary Newman also oversaw a slate that has been among the most successful on TV when it comes to awards kudos. Ditto FX Networks chairman John Landgraf, who will also soon fall under the Disney umbrella.

It’s just another example of how transformative the Disney/21st Century Fox merger will be to the TV landscape. Awards have been among the metrics for success inside 20th Century Fox TV, and this current awards cycle has been extra good to the studio — particularly its Fox 21 TV Studios, the Bert Salke-led shingle that also reports to Walden.

Per the studio, Fox 21 landed 11 Golden Globe nominations this year, followed by FX Prods. with 10. Those Globe nods included “The Assassination of Gianni Versace: American Crime Story” (4), “The Americans” (3), and “Pose” (2), all of which were shared between Fox 21 and FX Prods. Fox 21 also picked up one nod each for “Genius: Picasso” and “Seven Seconds,” while FX Prods. landed one for “Atlanta.”

No Disney-owned production unit earned a Globes nomination this year, but with the acquisition, that will soon change.

And it’s not just the Globes: According to the studio, 20th Century Fox TV and Fox 21 combined have led the winter awards cycle among studios, with 53 nominations across the Globes, SAG, AFI, Humanitas, WGA, and Critics’ Choice awards. (HBO Entertainment was next, with 43.) 20th’s haul include the most-nominated broadcast show, NBC’s “This Is Us,” which was snubbed by the Globes but received SAG, AFI, Humanitas, WGA and Critics’ Choice mentions.

Of course, Disney didn’t buy 21st Century Fox’s production assets for the awards, but in an age where ratings mean less, critical acclaim and kudo plaudits are increasingly important to a show’s value. At FX, Landgraf puts out an annual tally of how many shows appear on critics’ best-of lists. As consumers decide where to spend their streaming dollars, and programming becomes more of a key asset in this streaming age, acclaim plays an increasing role.

“We and HBO remain almost exclusively focused on best-in-TV quality as we invest in programming, and consequently, we have far and away the highest rate of return in terms of acclaim and Emmys on each program we make,” Landgraf said at the Television Critics Association press tour last summer.

Beyond 20th/Fox 21 and HBO, other studios enjoying the fruits of this winter awards season include FX Prods. (39 nominations total across the six key kudos), and “The Marvelous Mrs. Maisel”-led Amazon Studios (35).

Via 20th, which has reason to pump its chest as it prepares to become a part of Disney, here’s a look at how the production companies fared with awards nominations this winter (one caveat: Universal TV and Universal Cable Prods. are combined here, given their NBCUniversal lineage — although they actually operate as separate units): 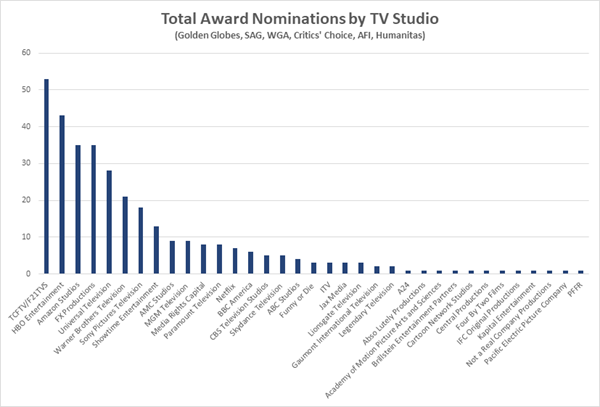