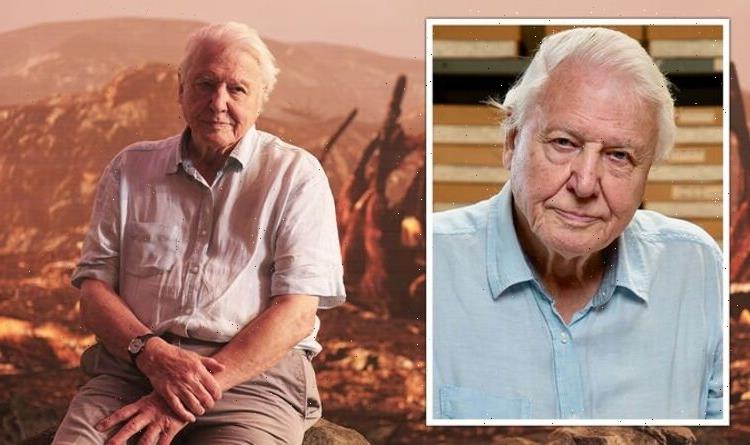 Sir David Attenborough has narrated a new BBC One documentary that sheds a light on the final days of the Late Cretaceous before an asteroid wiped out the dinosaurs. The documentary was filmed at a prehistoric graveyard in North Dakota over three years exclusively with the BBC and palaeontologists made some “extraordinary” discoveries within that time. Ahead of the special airing, executive producer Helen Thomas shared why Sir David got so involved with the project.

During the documentary, a preserved leg from a dinosaur which was possibly killed on the day the giant asteroid hit the planet was discovered at a remote site scientists have called Tanis, in North Dakota.

The impact of the six-mile asteroid ended the age of the dinosaurs 66 million years ago and triggered a mass extinction which killed off nearly 80 percent of the Earth’s species.

Within the BBC special, American palaeontologist Robert DePalma and his team also discovered a substantial amount of triceratops skin and a tortoise which had been impaled by wood.

Executive producer Helen Thomas spoke to Express.co.uk and other media about Sir David being part of the 90-minute documentary.

She explained: “We wanted David Attenborough to be involved as much as possible and he was really keen as well.

“But obviously, with Covid-19 he was not able to travel so Robert was absolutely brilliant in bringing a lot of fossils over to the UK where he was able to study them with [professor] Phil Manning.

“But it also gave David Attenborough the chance to see the fossils as well.”

She continued: “One of my favourite memories is going to be when we were setting up for a shot and I looked around and there were Phil and Robert.

“And David had a scalpel in his hand and a brush and he was literally being a palaeontologist and he was so enjoying himself.

“And that was one of my great memories of how invested he is in the project and how much enjoyment he got.

“We had David in the fossil workshop and we created a virtual studio rather than just David standing in Richmond Park or something like that – we wanted David [looking like he was] standing in the Late Cretaceous as much as he could.”

Professor Phil Manning and Robert’s work was described as “amazing” by Helen.

She exclaimed: “It has been great to share their journey and their experience of these extraordinary discoveries and actually be there when the discoveries were made.

“We had our film crews there when that leg was discovered, it was right in the middle of Covid-19 so I could not be there but we had a film crew and I just said, ‘Can you get to Tanis really quickly because they are doing the most amazing work?’

“And I got the most exciting phone call the world has ever had as the guys had discovered a dinosaur leg and it was just amazing.

“And what is lovely is we can now talk about it because obviously, we have not been able to talk about it for years, so that is fantastic.”

There are few dinosaur remains from the end of the Late Cretaceous leading up to the asteroid crashing into Earth.

If the leg which was discovered by Robert and his team is from the day the dinosaurs were wiped out, it would represent an unprecedented find.

Dinosaurs: The Final Day with David Attenborough airs at 6.30pm on BBC One on Friday, April 15.