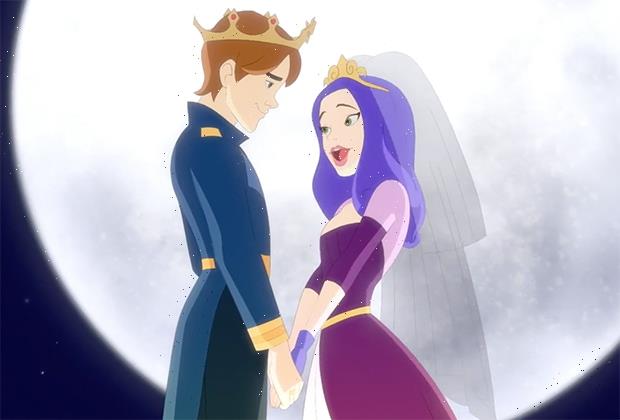 Mal and Ben’s big day finally arrived on Friday with the premiere of Descendants: The Royal Wedding, but the highly anticipated ceremony didn’t exactly go off without a hitch.

Despite Audrey’s best efforts as Mal’s official wedding planner — which is insane, considering she spent years dreaming of marrying Ben herself — it was chaos from the start. Dude the Dog was chasing Maleficent around the castle, Snow White’s doves literally flew the coop and, oh yeah, Hades accidentally set the venue on fire. (Mal just had to say “Nothing could ruin this day,” didn’t she?)

Because Mal refused to get married without her entire family present, she returned to the Isle of the Lost to bring Hades back to Auradon. But before she and the VKs returned to their old stomping grounds, Jay and Evie gifted Mal with an early wedding present — a charm bracelet with all of their family crests, including that of Carlos (played by the late Cameron Boyce). It represents “the four VKs, linked together forever,” Evie explained.

With an assist from Uma, who super-sized herself to put out the fire Hades left on the bridge, the VKs arrived at the new-and-improved island (“I love that the Isle has had a major glow-up!”) to meet with Mal’s dad. A pair of goons, presumably the sons of Pain and Panic, attempted to block Mal’s entry into Hades’ lair, but her dragon form was a little harder to turn away. 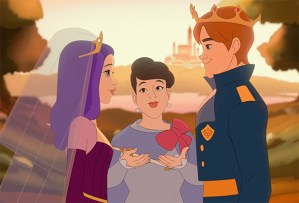 Hades explained that his literal meltdown was a total misunderstanding, and that even he isn’t ruthless enough to ruin the happiest day of his daughter’s life. Seeing how happy Mal was with her father by her side, Ben suggested that they get married right then and there — after the Fairy Godmother arrived with Belle and King Adam in tow, of course. And just like that, Ben and Mal became husband and wife, all to the tune of an infectious new earworm called “Feeling the Love.”

But wait, there’s more! After swapping vows and dancing the night away, Mal and Ben excused themselves for a moonlit stroll. “So, this what happily ever after feels like?” he asked, to which she replied, “For us? Yes. But somewhere, another story could be just beginning.”

The camera then panned over to a pile of white roses — painted red, naturally — and took us down the rabbit hole before fading to black. Though Disney Channel hasn’t officially announced anything just yet, it’s safe to say we’ll be getting a Descendants 4 at some point with a relative of Alice as the main protagonist.

OK, let’s talk: Do you think Mal and Ben’s story had a fitting conclusion? How choked up did you get during that Carlos moment? And what are your thoughts on Alice’s progeny taking the lead in a potential Descendants 4? Grade the special below, then drop a comment with your full review.