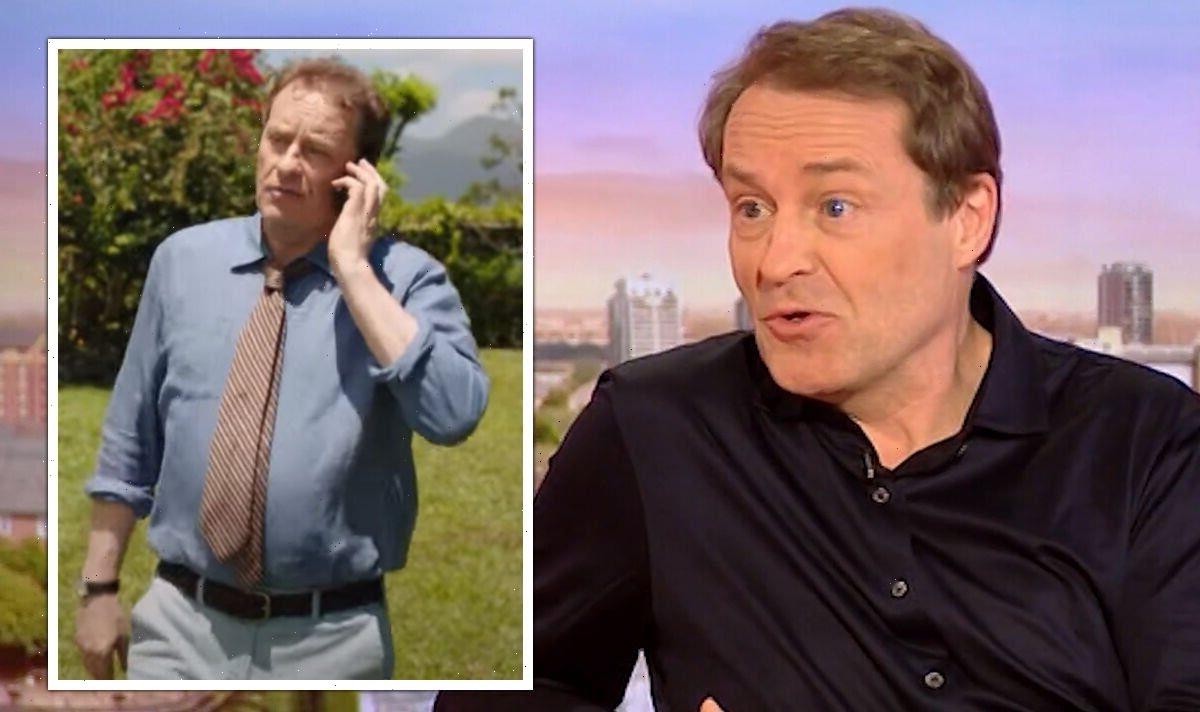 Ardal O’Hanlon joined Jon Kay and Sally Nugent on BBC Breakfast’s red sofa on Tuesday morning to discuss his latest novel. The Irish comedian revealed he had to put the book on hold to film Death in Paradise in the Caribbean when he was playing DI Jack Mooney. He also admitted “no one” believes him it was “tough” to film around the Guadeloupe Islands.

The Father Ted actor explained he started writing his second novel a few years ago but had to “park it” as he had to jet off to the Caribbean to film Death in Paradise.

Jon joked with the actor about how it must have been “tough” to film on the golden beaches around the Caribbean.

However, Ardal laughed and replied: “Well, no one believes me but it was tough.”

He continued to discuss how he finished his book during the coronavirus pandemic which happened after he had left Death in Paradise.

Sally said: “I am going to call it a comedy, but it is dark in places, isn’t it?”

Ardal explained the book, called Brouhaha, is a razor-sharp crime novel “on the surface”.

“It’s about the disappearance of somebody and the attempts to find this person and figure out why they went missing,” he explained.

“It’s very dark humour though,” Ardal added. “I mean, I grew up in the Border Region of Ireland, just south of the border, and given its position geographically it has a long history of smuggling.”

He added: “Everyone has their secrets and it’s darkly humorous with a deadpan tone and it hopefully captures the unique way with words these people have.”

Ardal stunned fans when he announced he would be leaving Death in Paradise in October 2019.

His character Jack, who first appeared in the fifth episode of the sixth series, initially worked for the Metropolitan Police until he was transferred to the fictional island of Saint Marie.

He was a firm favourite with fans, but the character eventually left the island after he realised he was only staying away from London to run away from his grief over his late wife.

Viewers will remember Jack returned to London to be closer to his daughter.

He was replaced by DI Neville Parker (played by Ralf Little) who is set to be returning to season 12 of the BBC show.

When asked if Jack will ever make a return to Death in Paradise, Ardal exclusively told Express.co.uk: “Ben Miller did! Ah, you never say never.”

However, the actor admitted: “Look, you know, I mean, I feel I did my time. I really did enjoy it but you know, it was four summers and it was a lot.”

He added: “Don’t get me wrong, I loved Death in Paradise but I’m sort of half glad – don’t tell anyone this, as long as it doesn’t go any further than this – I’m half glad I don’t have to go out there anymore.”

Ardal explained he struggled to be away from home for months on end to film the show.

The Caribbean is home to the crew and actors for almost six months each year, but some of the main cast opt to live in local villas with their families.

Death in Paradise episodes are available to watch on BBC iPlayer.