As so often happens when the cast of HBO’s “Deadwood” gets together, talk at the Emmy FYC panel held for Television Academy members on May 15 at the Cinerama Dome in Hollywood quickly turned into a celebration of the show’s legacy and the genius of creator David Milch.

The conversation took place just after a screening of the upcoming TV movie continuation of the series, which originally aired on the premium cable network for three seasons in 2004-2006 and panel participants, including actors Timothy Olyphant, Ian McShane, Robin Weigert, Kim Dickens, John Hawkes, director Daniel Minahan, and executive producers Carolyn Strauss and Gregg Fienberg, were soon reminiscing about what it was to return to the show after more than 10 years. In April, it was revealed that Milch had been diagnosed with Alzheimer’s Disease.

“I rehearsed the role for about two, three years back in 2005-06 and then I said, ‘Give me a decade to think about it, then I’m gonna come back and knock this fucker out of the park,” Olyphant joked about returning to the role of Sheriff Seth Bullock.

But while Olyphant was just kidding around – he added that the audience should look out for “Hitman 2028” because it was going to be “fucking great,” a reference to his critically-panned film “Hitman” – but there was truth at the heart of his humor. In “Deadwood: The Movie,” the actor delivers an understated performance as Bullock, a man perpetually balanced on the knife-edge between propriety and blinding rage. Back in the original series, Olyphant captured the sheriff perfectly, but time away has only deepened both the character and the performance.

Much of that is thanks to Milch, who cast Olyphant in the role back when the actor couldn’t imagine a situation where he’d be expected to play the “strong, silent type.” But according to Weigert, who returns to her fan-favorite role as Calamity Jane, Milch was always finding buried treasure within his cast and crew.

“[Milch] began to see things in me,” she recalled about the early days of developing her character. “Scary amounts of things in me. And the beauty of the relationship over time was – and this is a gift that David gave each one of us – is he’ll see this thing in you that you think should stay buried and unseen because it’s not for public consumption. And he’ll love that thing. He’ll bring it out into the sunlight and he’ll somehow love it enough that it becomes a lovable thing even in your own eyes.”

“And so there’s something very healing about working with this man,” Weigert added. 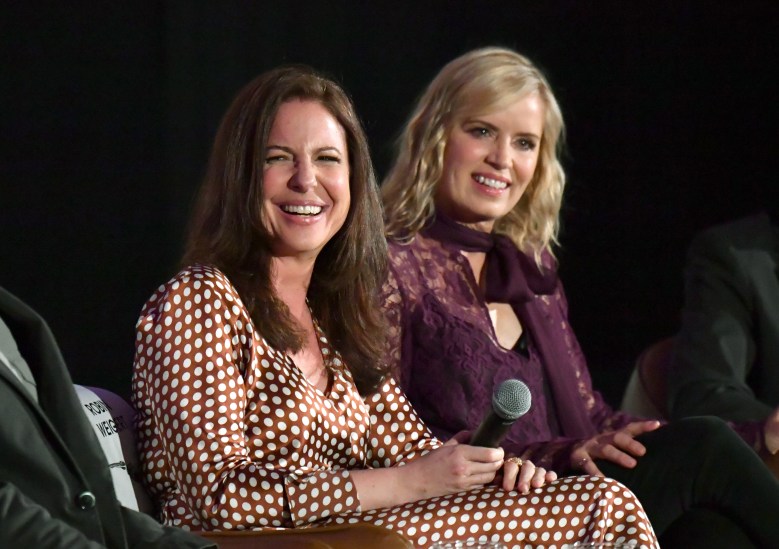 It was an experience like no other, but one that Olyphant managed to put words to, despite a caveat that he himself was no wordsmith. “He’s a man who didn’t see any separation between the work and your life. He saw the possibilities. He was able to reach out and grab ideas as they floated by with a fearlessness and a trust that he’d done the work,” the actor said. “That a moment of inspiration could be trusted, knowing it would get back on the tracks.”

But Milch’s genius was perhaps best captured in a story shared by Fienberg about the flurry of inspiration for a scene that appeared in Season 1 of the series. Milch came to him at three in the afternoon one day and told him that he was going to write a scene featuring Bullock, Sol Star (Hawkes), and Reverend Smith (Ray McKinnon) and he wanted to film it in two hours. But McKinnon wasn’t on set that day. And the scene hadn’t been written. So Milch goes off to write, Fienberg tells McKinnon to drive up the 405 to set.

Two hours later, Fienberg recalled, Milch came in with the scene (see below). “If I was a writer and I’d have written that scene, I would quit at that moment, framed it, and never written again,” he said of the quality of the scene in question, during which an addled Reverend came to Starr and Bullock’s hardware store to inquire if they were his friends.

The executive producer wasn’t the only person impressed with the scene.

“The guys got handed the scene and started rehearsing it and it’s beautiful,” Fienberg said. “Then we bring the whole crew in and they stand around to watch because they have to get ready to shoot the scene. The director says action. [The] guys rehearse. [And after you] could hear a pin drop. I look around and the entire crew, and I mean the entire group, including the key grip, is crying.”

“They’re crying because everybody was so into it and so cared about this show and everyone’s just moved by who these characters were and that’s how into it we were and how beautifully David wrote scenes and how the actors would just take what came and did it and lived it and, for me, that’s the ‘Deadwood’ moment. That’s what ‘Deadwood’ is.”

It was a perfect encapsulation of the evening as a whole, a bittersweet reunion of people who understood that they were lucky to have had the experience and even more fortunate to have an opportunity to return, but knew that the likelihood of discovering such magic in other projects was extremely low.

“The two best jobs I ever had were ‘Deadwood,’” Hawkes said. “When we made it and then the movie that we did. Because there’s just nothing else like it. Nothing more fulfilling or satisfying than working on that set.”