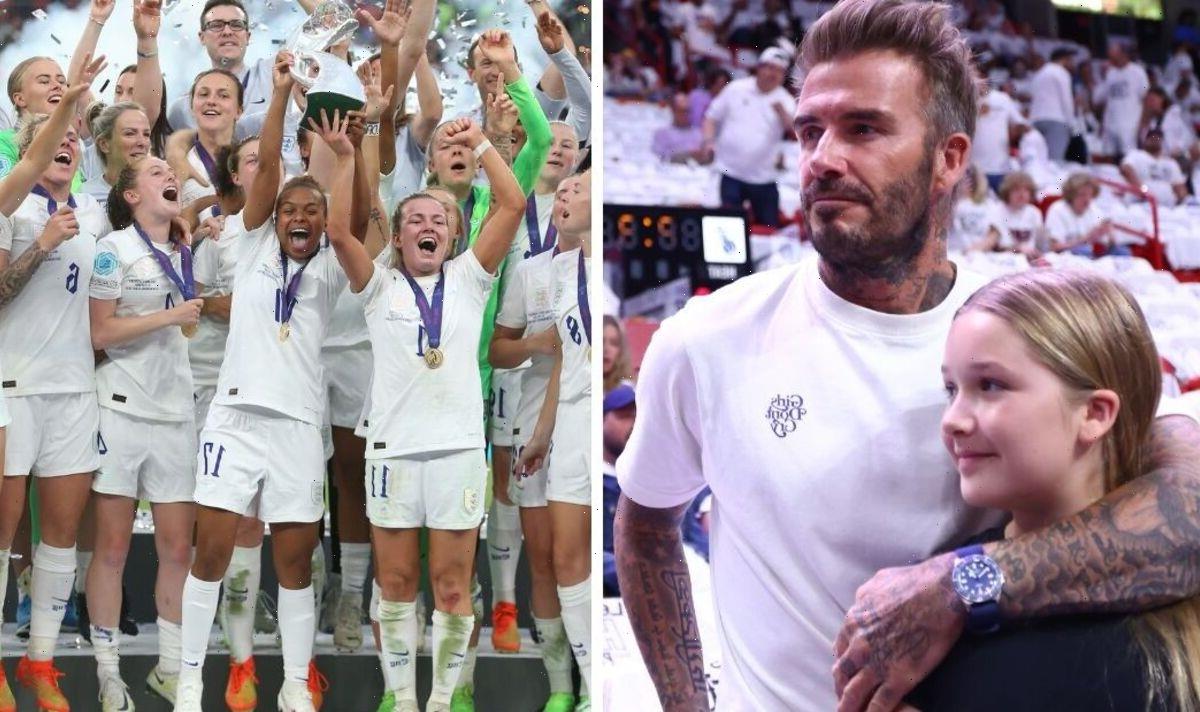 The Lionesses will be awarded a gong at the Pride of Britain Awards with TSB on Monday evening. Footballing legend David Beckham has rushed to praise the England team for inspiring a new generation of young women with their impressive performance at the Euros 2022. The father-of-four admitted their win has lead to Harper playing more football with him.

David will appear in a video tribute to the Lionesses at the star-studded awards ceremony,

He tells the team: “There was a real unity with the team, the excitement was building and these stadiums were full of families.”

He went on to give a personal thanks, sharing how they inspired Harper.

“Thank you very much, girls for inspiring my daughter and making her kick a ball around again with her dad.”

In an extended interview, David spoke of how he followed the team’s success while on a family holiday, providing a rare insight on his relationship with his daughter.

“For me personally, having a daughter, I want her to look up to inspiring people,” he said.

“They inspired a whole generation, a new generation.

“The amount of girls I was seeing in parks playing football, my daughter wanted to go out and play.

“That’s how inspiring it was for our nation.”

The former England captain admitted it was a “proud” moment to see the Lionesses lift the trophy and see them bring football “home”.

David remarked: “It was an unbelievable moment. I was proud, we were all proud, because as you all know we tried many times to bring it home, and we couldn’t do it.

“But we knew what it would mean to the country, and to our fans, and to the game.

“To do it now, in our country, in front of our fans, I don’t think as a player there is any better moment to do it.”

David added: “I just want to say congratulations to the girls for winning this Pride of Britain award, an amazing, amazing achievement.”

They are among those being honoured for their extraordinary achievements.

The Pride of Britain judges said: “This was a sporting moment that stood out for all the right reasons, brought to us by a team that encapsulates the very best of what it means to be British and at the top of their game.

“The Lionesses are a team we can all be proud of – on and off the pitch.”