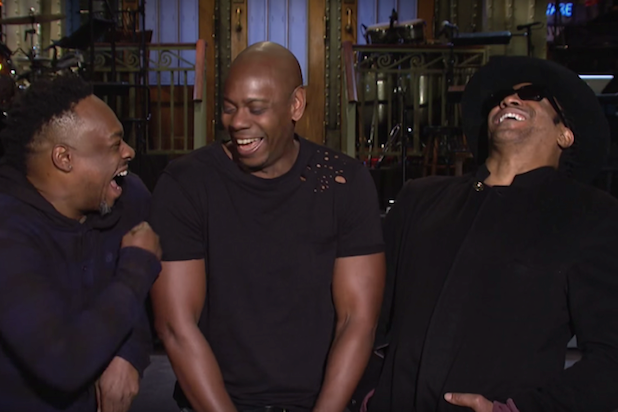 Depending on how things go Tuesday, Dave Chappelle will be doing a mirror image performance of a sort when he hosts “Saturday Night Live” for the second time on Nov. 7, just 4 days after the 2020 presidential election.

The gig will come just shy of 4 years to the day since the last time he hosted “SNL” on Nov. 12, 2016. For those paying attention, the significance should be obvious: Chappell’s 2016 hosting gig, his first, was the first episode after Donald Trump won the presidential election via a narrow electoral college victory despite losing the popular vote by nearly 3 million.

That episode was notable for Chappelle’s monologue, which addressed the very real uncertainty millions of Americans were feeling in part by his saying “I’m gonna give him a chance,” but adding “and we the historically disenfranchised demand that he give us one too.” Presumably, Chappelle will refer back to that sentiment in his next monologue, regardless of whether Trump manages to win reelection, or Joe Biden manages to overcome blatant attempts to suppress the vote in several key states.

“SNL” announced Chappelle would be hosting the Nov. 7 episode during the Halloween episode hosted by John Mulaney. And appropriately, the Halloween episode opened with Jim Carrey as Joe Biden, reading from a parody of “The Raven” warning that Trump very well could still end up getting a second term as president. Watch that sketch here.