In this round-up, our reviewers look at a handful of movies released this week, from foreign, local and sometimes obscure films that deserve some of the spotlight. Which ones are worth the cost of a ticket?

Melbourne-based filmmaker Stephen Amis spent six years putting together a supposed documentary about the Sea Shepherd Conservation Society's attempts to stop Japanese whaling in Defend, Conserve Protect. Amis was volunteering on the Bob Barker, a Sea Shepherd boat, when it infamously was about to be crushed between two Japanese whaling vessels in the southern ocean in 2013. Despite the dramatic footage, which was cut together thanks to a crowd-funding campaign, Paul Byrnes found the message shallow. 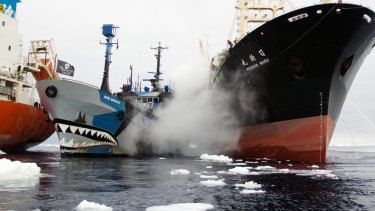 "The film is basically a Sea Shepherd-approved fundraiser, but even so, it's not exactly timely.

Anyone who hasn't kept up with the news might not know that the Japanese announced the end of their "research" whaling in the Southern Ocean in December last year. Unfortunately, they also decided to quit the International Whaling Commission and restart commercial whaling in their own waters after a break of 30 years.

Some of the minke whales they once killed in Antarctica they are now killing in Japanese waters, which raises the question of what the Sea Shepherd campaigns actually achieved.

That question isn't discussed here, of course, because it would complicate a fairly simple narrative: the young heroes risking their lives to save a beautiful, mystical and intelligent species from this "floating abattoir". In case we did not know how mystical, Dan Aykroyd voices a narration as the voice of the whales, with words that defy description.

When the Nisshin Maru kills a sole minke, he gives it a funerary farewell: "We say goodbye to one amongst us. Death decrees his time has come. The call of the dead, lyrics unique to our pod and to our hearts…"

I mean, really. What possessed Amis and friends to venture into the minds of whales? Why not trust the images to carry the weight, instead of this mystical mumbo jumbo?

Amis had the opportunity to go deeper into the politics and the difficulty involved in high-risk sea conservation, and perhaps into the character of those who do it. Instead, he gives us a 76-minute commercial for Sea Shepherd, and precious little about these courageous young people, and why they risk their lives.

Stopping whaling is important and costly work. I understand the need for fundraisers. Making good documentaries is also important work. Best not to confuse the two.

This British-German biographical drama, directed by Marcus H Rosenmüller, tells of how a Nazi prisoner of war became a professional footballer in the shape of a love story. Spotted playing goalie in a POW camp in Lancashire, Bert Trautmann was recruited by the manager of a beleaguered local team, Jack Friar, who was to later become his father-in-law. From there Trautmann's rise, despite the hostile reception, was swift and despite being offered reptriation back to Germany, he stayed and married Margaret Friar. In 1949, Trautmann joined Manchester City, where, according to reviewer Paul Byrnes, the drama really unfolds as he went on to become one of the greatest goalkeepers in the club's history and a legend of English football. 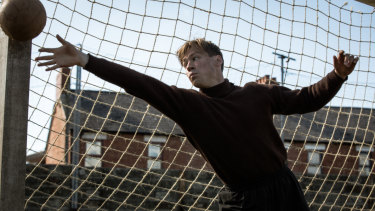 German actor David Kross as the footballer Bert Trautmann in The Keeper.

"Who would believe a story in which a former Nazi becomes the star goalkeeper for Manchester City? 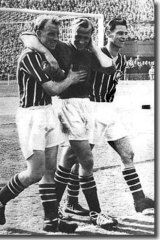 By any measure, that's an amazing story, but how to tell it?

They could have shown how enthusiastic a Nazi Trautmann was from the age of 10 – that he volunteered for service and was twice promoted, that he escaped three times in the course of the war, that he witnessed a massacre in a forest by a Nazi assassination squad – but that would have ruled out all audience sympathy.

It might be the truth, but movies about real events generally operate under the principle that audiences can't handle the truth – not that we get much chance. Instead, we get the lean and attractive David Kross as Trautmann, playing the role with almost heroic self-abnegation as his character wins everyone over, save by save, and by being the nicest German they ever met.

The real Trautmann was ruthless and tough, with a will of iron. The qualities that made him an outstanding soldier made him a great goalie.

If the movie puts some gloss on him, it also tries to be fair. A flashback shows that he is troubled by his memories. More crudely, the writers emphasise the cruelty meted out to the German prisoners by their captors, in order to provoke our sympathies.

Believe me, if there is a more morally flexible film this year, I will be surprised. For the most part, the film embraces its contradictions. As a parable about forgiveness, it's a fine example. As a portrait of the real Trautmann, some questions remain."

British filmmaker Asif Kapadia has constructed from more than 500 hours of never-before-seen footage a gritty documentary about, arguably, one of soccer's most famous players, whose devilish turn off the field cost him his career. Diego Armando Maradona was a global sensation when he played for S.S.C. Napoli in the 1980s. So what went wrong? Reviewer Sandra Hall found out. 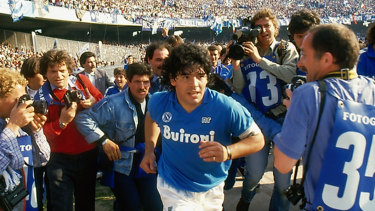 "Stories about the corrosive effects of fame are everywhere. But few can compare with the violent fall from grace suffered by the Argentinian soccer star, Diego Maradona.

Kapadia has put together an extraordinarily intimate account of his rise and fall, enriched by grainy but graphic footage recording every phase of his life. It goes all he way back to the beginning with black-and white film shot in Villa Fiorita, the Argentinian slum where he grew up, honing his talents as a precociously gifted footballer in games with his friends.

The film skims over his first breakthrough – his contract with Barcelona – because Kapadia is eager to reach Naples as soon as possible, rightly believing that the fractious relationship between Maradona and this turbulent city holds the key to his life story. By the time, the two have fallen out of love, the footballer’s career has gone into a decline from which it will never fully recover.

Inevitably, the game is bound up with politics. At first, it’s Naples’ long-running feud with its northern rivals, Juventus and Milan, who look down on the Southerners as "unwashed peasants" and denigrate their city as an incubator for cholera. Naples fervently loathes them in return and after Maradona leads the team to victory against these slanderers, he can do no wrong – despite his partying and his worsening cocaine habit.

His popularity also survives the 1986 World Cup in Mexico City, where he plays for Argentina, coming up against the British, still nursing a hangover from the Falklands War. He wins this game, too, partly because of the infamous goal he achieves by way of a foul.

But Naples and its fanatical passion for football has now become too much for him. The film shows him ducking for cover as he’s mobbed by press and public. For the first time, his natural ebullience starts to fail him. He looks haunted, as if already having intimations of the ferocity that will be unleashed when his worshippers turn on him.

When it finally happens, the outcome is brutal."