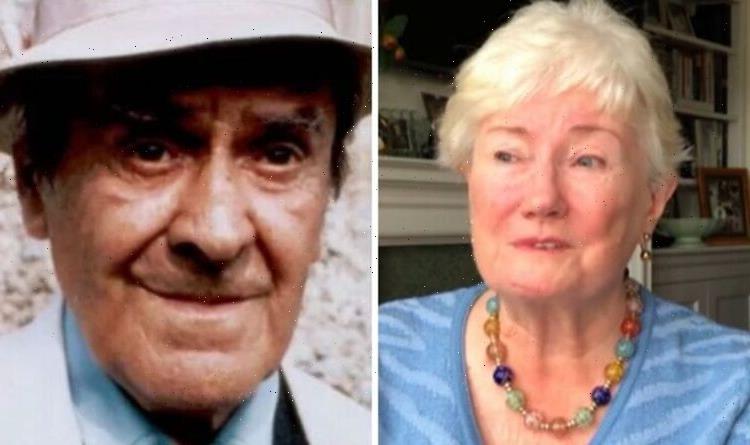 Fans of classic series Dad’s Army got a special insight into the background of the show in Channel 5’s We Love Dad’s Army. Sergeant Wilson actor John was well-known for his comedic role on the hit BBC series. Despite the show ending in 1977, Dad’s Army fans continue to hold the show in high regard. As cast members and fans delved into some of their recollections from the show, Caroline explained she felt sorry for John before he died in 1983.

John was married three times, first in 1940 to actress June Melville, then to Hattie Jacques in 1949 and finally to Joan Le Mesurier in 1966.

He was married to the latter until his death 17 years later.

Unfortunately, John’s heavy drinking had led to him developing cirrhosis of the liver.

At the age of 71, he died of a stomach haemorrhage brought on by his condition.

Caroline, who starred alongside John as the recurring character Janet King, opened up about her friendship with him.

Speaking on the Channel 5 documentary, she stated: “He was such a lovely man and I felt so sorry for him.

“He’d had such unhappy marriages, hadn’t he? I knew of him through my landlady, Peggy-Anne.

“She was a great friend of Hatty Jacques, one of his wives.”

The programme explored John’s rocky relationships, which included his last marriage to Joan, who had an affair with John’s best friend, Toby Hancock.

Caroline recalled: “He just had an air of tragedy about him.

“Everybody would rush around, looking after him.

“Make-up girls powdering him down. He’d call everyone ‘dear lady.'”

Speaking in Dad’s Army: Secret Lives and Scandal, Joan explained: “He was a sick man.

“But he realised he had brought it on himself, if you don’t mind me saying so,” she laughed.

She explained: “They [John and co-star James Beck] used to come home from work every night and sit at the table and get absolutely p*****, and have a lovely evening.”

Sadly, the men’s excessive lifestyles caught up with them both.

Beck’s character, Private Walker, had to be written off the series when he was diagnosed with pancreatitis.

The storyline saw a touching moment addressing the character’s departure, which Ian Lavender, who played Private Pike, described as “poignant”.

Both We Love Dad’s Army and Dad’s Army: Secret Lives and Scandal are available to watch on My5.