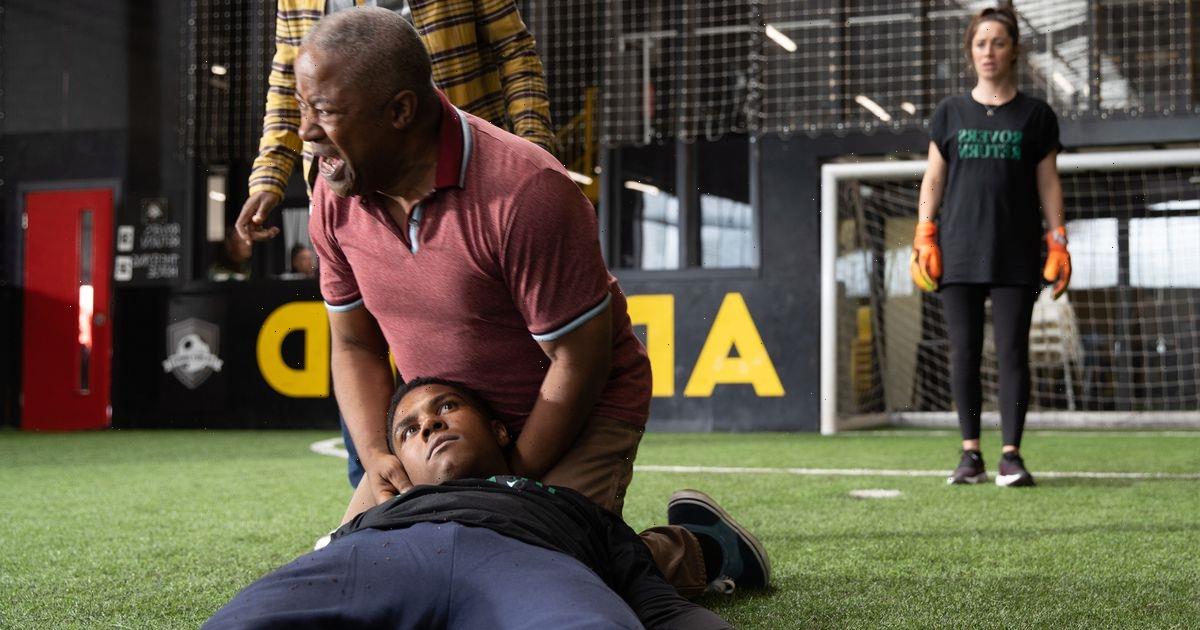 Coronation Street spoilers have confirmed a harrowing health battle for football star James Bailey, as he suffers a potentially fatal collapse next week.

The Weatherfield County striker risks being killed off the famed ITV cobbles, as spoilers confirm a friendly football match is set to go wrong.

Next week, Rovers landlady Jenny is feeling pressured when she meets with the pub's charity football team, well aware their rivals the Flying Horse are out for revenge.

With Tim there to advise, Jenny enlists James' help to coach the team on the astroturf.

But things aren't all sunshine and rainbows at home with Tim, either, as Peter catches him hiding from Trina in the cab office. He soon confesses that she's his sex therapist, and that since his heart op he's been plagued by impotence.

How will Peter take the news? Tim presumes badly, because as James puts the Rovers team through their paces, captain Dev gives them a pre-match pep talk.

Tim, however, misconstrues his encouraging words and assumes Dev is making a dig at his impotence.

He soon accuses Peter of betraying his confidence and storms out – and, with little choice left, James agrees to step in.

Aggie later spots a glum Tim and invites him in for a cuppa, and as he opens up, the match kicks off.

The Flying Horse are in the lead, and with just minutes of the tense match remaining, James puts his best Weatherfield County foot forward to bring the Rovers in front.

Suddenly the star striker collapses, and dad Ed races across the pitch, screaming for an ambulance as brother Michael performs CPR on his unconscious sibling.

At the hospital, James is informed that he has a condition called cardiomyopathy, and needs to be fitted with an ICD to prevent further cardiac arrests.

As he's wheeled away to surgery, his mum Aggie breaks down in tears.

Elsewhere, football is causing just as much trouble in youngster Sam's life, as he presents a class slideshow about chess.

One boy, Owen, tells Sam how much he enjoyed it and, oblivious to his sarcasm, Sam invites him to the café to teach him the game. Put out by his earlier encounter, Hope suggests Sam should pretend he loves gaming and he invites Jack and Liam round after school.

But as they begin to play a football computer game, Sam can't help but blurt that the game is pointless as it doesn't require skill or strategy – leaving Liam and Jack in disbelief.

Sam tries his best to converse with them but it's clear he's finding it difficult, and things only get more tense as they quiz him about the letters he writes, leaving him desperate to change the subject.

Desperate to impress his chess rival Jalena, Sam arrives at her party in a football top and trainers. She soon reveals, however, that she isn't interested in football in the slightest and wanted to meet up for a game of chess instead.

Sam's crushed when she tells him that now he's into football, she's invited John instead.