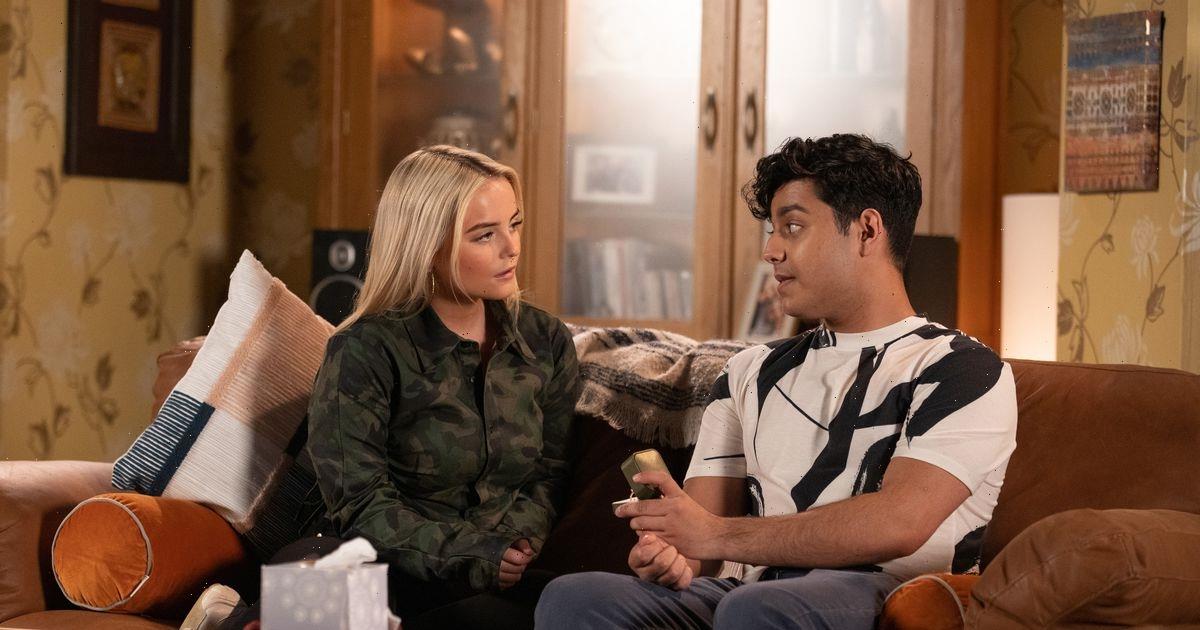 Coronation Street fans can expect plenty of drama next week as Kelly Neelan (Millie Gibson) finds her life in danger once again.

Ellie from the Gazette calls at the bistro with some leaflets promoting a Win a Dream Wedding competition and Kelly makes out that she and Aadi Alahan (Adam Hussain) are planning a wedding.

She explains to him that as part of the qualifying process they have to take part in a Mr & Mrs quiz.

As Kelly and Aadi ask each other probing questions, they each admit that they’ve never had a sexual relationship and Aadi leans in for a kiss.

Kelly and Aadi meet up with Ellie in a hotel bar and take part in the Mr & Mrs Quiz.

They fail to answer the questions correctly but when Aadi reveals that they belong together, Ellie reckons the readers are going to love them.

Back on the street, Asha Alahan (Tanisha Gorey) clocks Kelly’s engagement ring and Aadi announces that he passed his driving test.

Dad Dev Alahan's (Jimmi Harkishin) delighted and gives him the keys to a car.

Asha confronts Aadi over Kelly’s engagement ring and Aadi admits that it’s their Mum’s ring but assures her that he and Kelly aren’t really engaged, but are only pretending so they can win a holiday.

Having overheard Kelly chucks the ring at Aadi, jumps in his new car and speeds away.

Aadi borrows Asha’s old princess bike and sets off down the ginnel. Aadi comes across his car crashed into a bollard, is Kelly okay?

Adam Barlow (Sam Robertson) points out that he was questioned for over 10 hours which is against the rules and there’s a tape missing.

Alya visits Stu in prison but they’re interrupted by the arrival of Yasmeen Metcalfe (Shelley King).

With Alya gone, Stu tells Yasmeen the whole story of his affair with Charlie.

Yasmeen tells Zeedan and Alya how Stu wants them to talk to his solicitor. Norman, Stu’s solicitor, confirms that Stu was coerced into making a confession.

Alya puts pressure on Yasmeen to allow Stu to move back in as it’s clear he’s innocent and has nowhere to go.

As Stu heads out of the prison gates, he’s shocked to find Yasmeen waiting for him.

In Victoria Garden, Yasmeen tells Stu that she believes he’s innocent. When Yasmeen asserts that he must let daughter Bridget know his intentions, Stu reluctantly agrees, how will Bridget react?

Stu returns to the street to be met with hostility from Dev and Bernie Winter (Jane Hazlegrove).

Yasmeen comes to Stu’s rescue and tells Stu that he’s moving back in with her at No.6.

Stu later apologises to Kelly and Tim Metcalfe (Joe Duttine) warns him to stay away from Yasmeen, but Kelly confirms that he’s back living at No6 and Yasmeen is helping him to clear his name.

At No6, Stu offers to pack his bags but Yasmeen points out that running away will only make him look guilty.

Also, for Dylan Wilson's ( Liam McCheyne) last night with him, his dad Sean Tulley (Antony Cotton) offers to organise a farewell dinner for him but when he has to work Glenda Shuttleworth (Jodie Prenger) has an idea that’ll cheer him up.

When James suggests a kick-about before dinner, Dylan admits he doesn’t want to go home, but would rather live here.