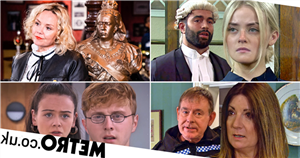 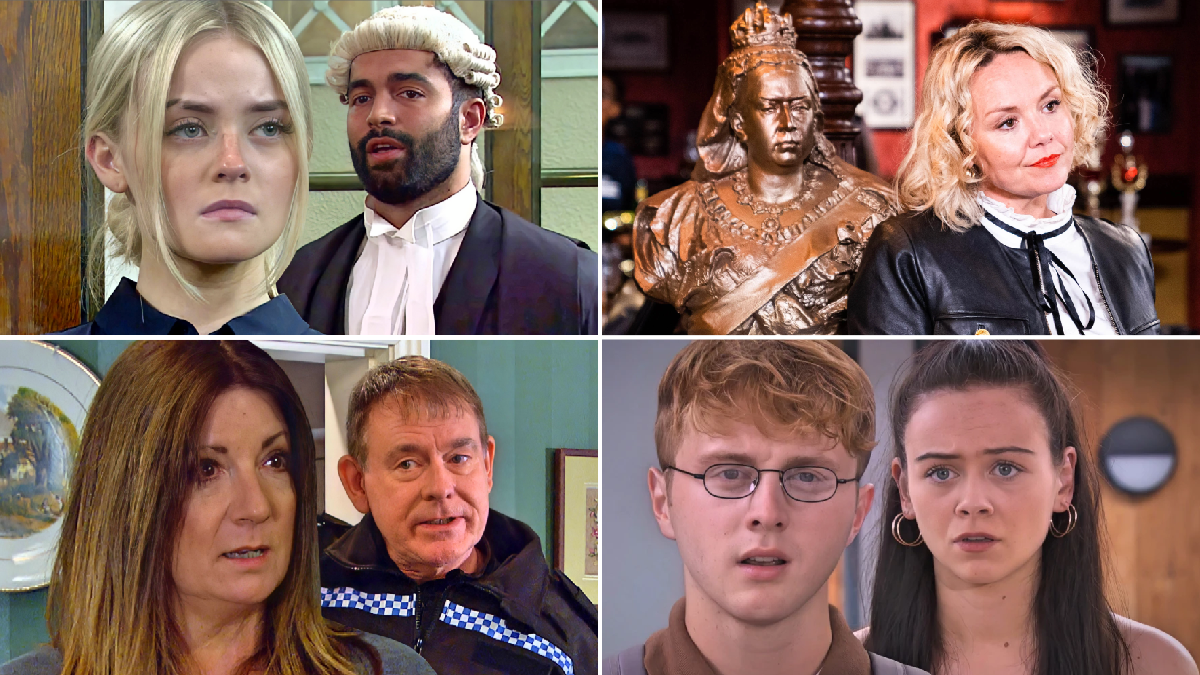 It’s a week of revelations, accusations and admissions in the land of soap, as some of our mainstays question everything, while others make deadly assumptions.

For the residents of Coronation Street, it’s a bit of both! The biggest talking point for the cobbles regulars next week is, of course, Kelly Neelan’s sentencing, but will Imran Habeeb’s impassioned speech be enough to make the judge go easier on her?

That remains to be seen. But Toyah Battersby is desperate for answers, after she starts to suspect her beau has been unfaithful.

Janine Butcher sets her sights on The Queen Vic in EastEnders, and successfully secures herself a trial shift after impressing Frankie Lewis, but is this an omen of things to come?

The jury is still out on that one! Emmerdale, meanwhile, sees Leyla Harding confused as ever about what hubby Liam Cavanagh is getting up to, and soon enough, she reckons he’s having an affair with Bernice Blackstock!

And as for Hollyoaks? Yet another unmissable week for the Channel 4 soap is on the way, as Timmy Simons underestimates Juliet Nightingale, who brands him as Peri Lomax’s stalker!

Timmy, however, is not going down without a fight, and therefore he takes drastic measures to eliminate the threat. And by threat, we mean Juliet!

Sounds like quiet the week in soapland, right? If you’re craving more information then you needn’t look any further, as we’ve handpicked several of next week’s biggest moments. Do yourself a favour and have a read. You won’t regret it, we promise!

Imran is stunned when Sabeen wants him to join her on Harvey Gaskell’s appeal case, making reference to where he was on the night of Corey and Kelly’s verdict. He fears she’s going to resort to blackmail, but he sticks to his guns – adamant that Harvey should remain behind bars. Toyah questions the intimacy between the former lovers, and asks Imran if he’s cheating on her with his ex. Will Imran come clean?

It’s the day of Kelly’s sentencing, and Imran delivers yet another superb speech, begging the judge to consider her mental health and troubled upbringing. Kevin, meanwhile, rages at Sabeen.

David reports Daniel to the school for assaulting Max. Daniel is summoned for a meeting with the deputy head, and while he apologises for grabbing Max’s jacket, he remains adamant that the teen stole his wallet. Shona refuses to support David’s actions, but that doesn’t stop him from reporting Daniel to the police! Max, meanwhile, uses a bank card in Dev’s shop which is declined.

Janine is forced to explain herself when Scarlett finds Zack in the living room after spending the night, much to Kat’s dismay. She resolves to get a new job and overhaul her life for her daughter, and when she sees Frankie struggling to handle the crowd in the Vic, she spies an opportunity. Frankie agrees to give her a trial shift, Janine sets foot behind the bar, and all is right in the land of Walford once more!

Gray asked Whitney out for dinner, but she declines, claiming she still thinks about Kush all the time. What’s more, she’s annoyed, as Jen tells her she’s blown her chance at stardom. Gray, however, masquerades as her manager, and has a word with Jen. His efforts pay off, as Jen tells Whitney she’s on the line-up for her entertainment showcase. Whitney softens, and tells Gray they can give it a go, but they need to take it slow.

Harvey is livid when he discovers Dana is intent on deferring university, but she defends her choice. He turns to Bobby for support, hoping he will try and convince Dana to take her place at uni. Bobby reluctantly agrees, but his efforts backfire dramatically.

Leyla thinks Liam has been behaving rather oddly since he started at Hotten General, and she’s left concerned when she discovers he doesn’t work there. She’s knows he’s hiding something, and soon becomes convinced that he’s having an affair with Bernice – especially when she sees him putting flowers in the back of his car! Leyla and Priya follow him to a house with a ‘For Sale’ sign outside.

Chloe bursts into tears when describing her home line to Sarah and Noah, but Noah manages to find the right words to console her. He agrees to keep quiet about the fact that Sarah has been meeting up with Chloe, but only if he can come along to their meet-ups in the future. Sarah realises Noah fancies Chloe.

Harriet reveals she’s been feeling a lack of purpose since the death of DI Malone, but she’s left thoughtful when PC Swirling informs her that the police are recruiting and that she should consider re-joining the force.

Timmy is desperate to win Peri’s affection, and therefore he uses his hand as an excuse to pay her a visit at the hospital. Juliet, meanwhile, comes to realise that her girlfriend has a stalker, and after witnessing them together, she works out that it’s Timmy! She makes an accusation, and Timmy decides that drastic action is necessary, as he pushes her down a flight of stairs! Afterwards, he pays her a visit in hospital, and contemplates silencing her for good.

Shaq and Imran locate Misbah’s former roommate, who would’ve known her when Shaq was born, and decide to arrange a reunion, but Misbah works out what her children are up to, and thus meets with Shaq instead, railing at him for interfering in her life. She gets into a heated argument with Shaq, and – desperate to make him stop searching – she tells him that his dad is dead!

Ella wants to hang out with Charlie, which leaves Leah annoyed. Nancy is stunned when Leah refers to Ella as Charlie’s ‘girlfriend’, and it appears as if there might be some truth in this. Darren catches Charlie was attempting to buy condoms, and Nancy is rendered speechless when she discovers this. They warn him against having underage sex, but will he listen?