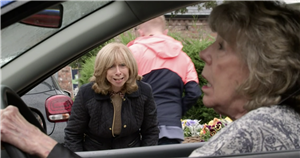 Coronation Street fans are growing increasingly worried for soap stalwart Audrey Roberts – and are convinced she could be involved in more car crash horror.

Audrey's eyesight seems to be worsening on the cobbles after she smashed into Rita's parked car and struggled to read the text on her birthday present boxes – with her daughter Gail begging her to get her eyes tested.

And there seemed to be some foreshadowing at play in Friday evening's episode, as Gail complained to David: "Maybe it's Rita's car this time, but next time it might be Rita squished under the wheels!"

Fans aren't convinced that it's Rita in danger – but they think someone is definitely at risk on the street, especially as Super Soap Week approaches.

Turning to Twitter, one terrified fan posted: "Is Audrey's potential bad eyesight going to play a part in the stunts in super soap week? #Corrie."

Someone else echoed: "I wonder if Audrey driving storyline with Rita will go into knocking down a resident later on down the line?"

And another fan had a different theory altogether, as they penned: "Audrey accidentally runs over Corey and kills him, everyone rejoices in the street! #Corrie."

Another social media user quickly agreed: "Unless Audrey runs Corey over and kills him then this storyline makes no sense!"

Audrey's behaviour is definitely concerning – with some fans predicting Audrey will lose her vision altogether, while others think she could soon be diagnosed with dementia.

One theorised: "Has she got eye problems or onset of dementia?"

"Macular degeneration is my guess," someone else echoed, while a third fan speculated of a tragic dementia storyline: "Maybe something along the lines of what Emmerdale did with Ashley's last scenes. If she's leaving she needs a convincing and heartfelt send-off."

Plenty are convinced that Audrey is set to be killed off in Soapland, after they noticed an abundance of 'concerning' death references in this week's episodes.

Sitting in the bistro while celebrating her 81st birthday, Audrey shouted at her relatives: "Write a list [of gifts] and send it to me on my death-bed, because that's clearly where I'm heading!"

Audrey was celebrating her birthday with a selection of 'old woman' presents – which included a foot spa, a slanket and a pair of fuzzy slippers.

Later on Friday, the Platts staged an intervention, with David stealing Audrey's car keys and refusing to let her drive unless she gets her eyes tested.

But will she find a way around it?