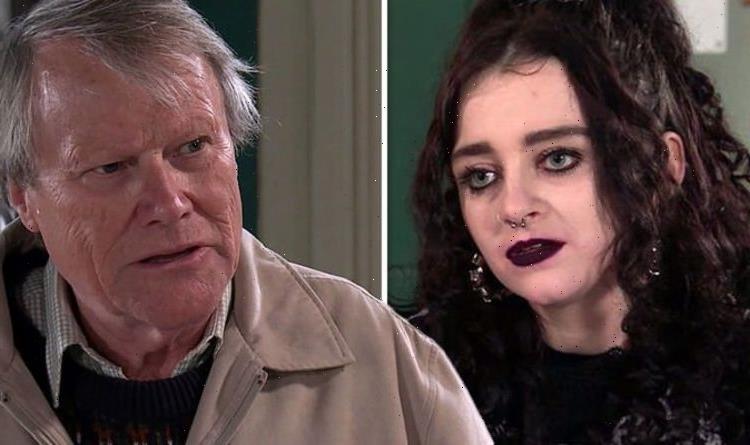 Nina Lucas (played by Mollie Gallagher) was incandescent when Corey Brent (Maximus Evans) was acquitted of Seb Franklin’s (Harry Visinoni) murder and has been hellbent on revenge ever since. However, will Roy Cropper (David Neilson) step in and take drastic measures to stop Nina from risking her future after Wednesday’s heart-to-heart on Coronation Street?

Earlier in the week, Roy was horrified when he was forced to stop Nina from running over Corey.

Roy remarked: “It’s far better for you to vent your anger and frustrations upon me than others.

“Despite your recent protestations, you have just described yourself as attempting murder.”

“That was just a caricature of myself,” Nina quipped.

“I know what I saw,” Roy said and his niece hit back: “How about you focus on what you didn’t see? You didn’t see me do it.”

Later, Nina apologised to Roy for taking her frustration out at him.

“I’m extremely worried about you,” he revealed and she replied: “I know.”

“Frightened for you would be a better summation,” the cafe owner added.

“The only thing that stopped me was you and your beady eye.”

“The consequences would be dire for you never mind about him,” Roy noted.

“I didn’t care I wanted to see him go flying, land hard, broken leg, career ruined, chronic pain for the rest of his long miserable life,” Nina admitted. “But I just couldn’t put you through having to witness it.”

“Fantasies are harmless as long as they remain as such but what if there is a next time and I’m nowhere to be seen?” Roy asked.

“Well I walked for miles today and thought about how you’d have to visit me in prison,” she replied.

“How you’d be trying to keep my spirits up and how it would kill you. The bottom line is I love you more than I hate him.”

Roy remarked: “I was serious about the counselling if we could find the right person.”

“Maybe,” Nina conceded. “Justice is obviously off the table. I can let it eat away at my soul and waste my one and only precious life or I could live it to the full. Honour Seb by sucking the marrow out of every single day.”

Although Nina has pledged to give up her revenge plan, will Roy believe her or does he suspect she could be lying to him?

The cafe owner is determined to stop Nina from wasting her life and may take matters into his own hands by getting revenge on Corey for his niece.

Will Roy harm the aspiring footballer and go to prison to save Nina from ruining her life?

Coronation Street airs on ITV on Mondays, Wednesdays and Fridays at 7.30pm.