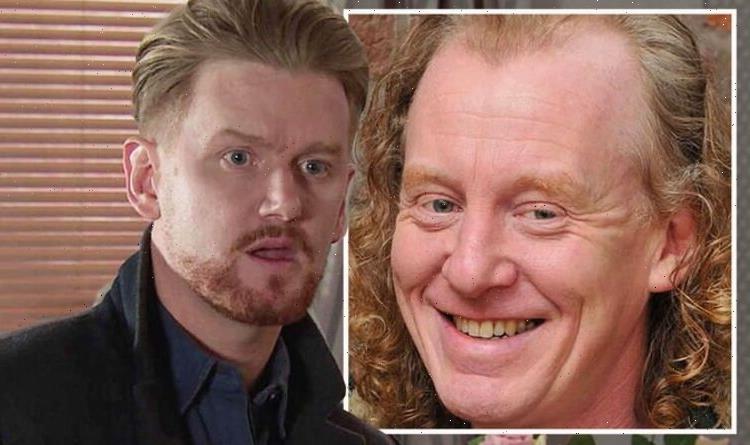 Eddie (played by Steve Huison) is currently living in Germany, having split from his ex-wife Anna Windass (Debbie Rush) in 2011 and he managed to get himself a job working with his brother, Len. Gary (Mikey North) has made fleeting references to his father over the years and he last saw him when he left Coronation Street to go and stay with Eddie when he discovered Alya Nazir (Sair Khan) had cheated on him. However, the dodgy dealer could now call on his father for help as he made a big discovery at the end of Wednesday night’s hour-long instalment of the ITV soap.

The theory from Express.co.uk comes from the end of the episode when Gary discovered Rick Neelan’s (Greg Wood) body was going to be found.

Earlier in the dramatic instalment, it seemed nothing could upset his day as Laura Neelan (Kel Allen) asked him and Maria Connor (Samia Longchambon) to be her daughter, Kelly Neelan’s (Millie Gibson) guardians after she died.

After years of trying to cover up what he did to the young girl’s father, the dodgy dealer thought this was finally his reprieve from it all.

He thought he would be able to put the past behind him and his family would be complete with their new addition.

Gary’s earth began to crumble around him when having had success with her political campaign, Maria told him the place he buried Rick’s body was going to be the new grounds for Weatherfield County.

Getting her phone out, Maria told her husband it was going to be on an old brownfield site and when she showed him which one, he was mortified.

“What’s up?” the political campaigner asked, to which she was met with another question as Gary asked her: “When does the build start?”

“I don’t know, it doesn’t say,” she remarked, before suddenly realising what was going on as she also knows about what happened to Rick.

“Has this got something to do with Rick? Is this where you moved the body to?” Maria asked, with Gary confirming her suspicions.

The end credits rolled as Gary was left panicking over what this means for his future as a free man, knowing it is only a matter of time before he is unmasked as the loan shark’s killer.

In upcoming scenes, a police investigation will begin as Rick’s body is found by the authorities and they break the news to the Neelans.

Everyone is horrified to discover the loan shark never moved abroad and was within miles of Weatherfield the whole time.

Feeling the pressure of his secret on his shoulders, Gary will tell his wife he is going to hand himself in to the police.

She will try to persuade him otherwise as she doesn’t want to lose him and this is when Eddie could be brought into the picture.

Needing someone to talk some sense into her spouse, the hairdresser could make a call to her father-in-law to come and speak with Gary.

The dodgy dealer would be shocked to see his father standing in front of him as the last time they saw each other was in 2015.

Eddie was able to offer his son some solace then and he will be hoping he can do the same this time around as Maria would have filled him in on everything.

As the father and son duo sit down to talk, they could agree what would be best is if Gary left the cobbles for several months.

In the time he would be away, living in Germany, the dust would settle about Rick and the finger of suspicion would not be pointed at him.

He would also be far enough away to ensure if any curiosity did arise, the police would not be able to find him and continue with another lead.

To get around moving to Germany for a while, he could explain to Kelly his father is having some health troubles and need some help.

Seeing Eddie in the flesh, the young girl could agree he needs to be at home with his son instead of being back on the cobbles.

Kelly would have Maria to help her grieve for both her mother and father and wouldn’t even think Gary would have something to do with Rick’s death.

But will Gary actually be able to get away with murder and will Eddie demonstrate he is a father who is willing to do anything for his son?

The actor who played Eddie, Steve, left the cobbles in 2011 after just three years portraying the role of the Windass father.

The character’s wife, Anna, decided she was going to stay in Weatherfield and raise adopted daughter Faye Windass (Ellie Leach) as her own.

This was something Eddie did not agree with and he later departed but according to the actor, it was not his decision to leave.

Speaking at the time of his exit, the soap star explained: “For those who don’t know by now I will be leaving Corrie in about six weeks.

“Anyone know of any jobs going?

“It was management’s choice. They’re leaving the door open apparently though,” he continued in a post on social media so is it time for Eddie to return?