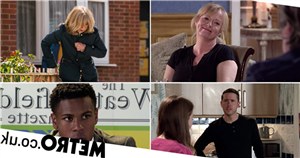 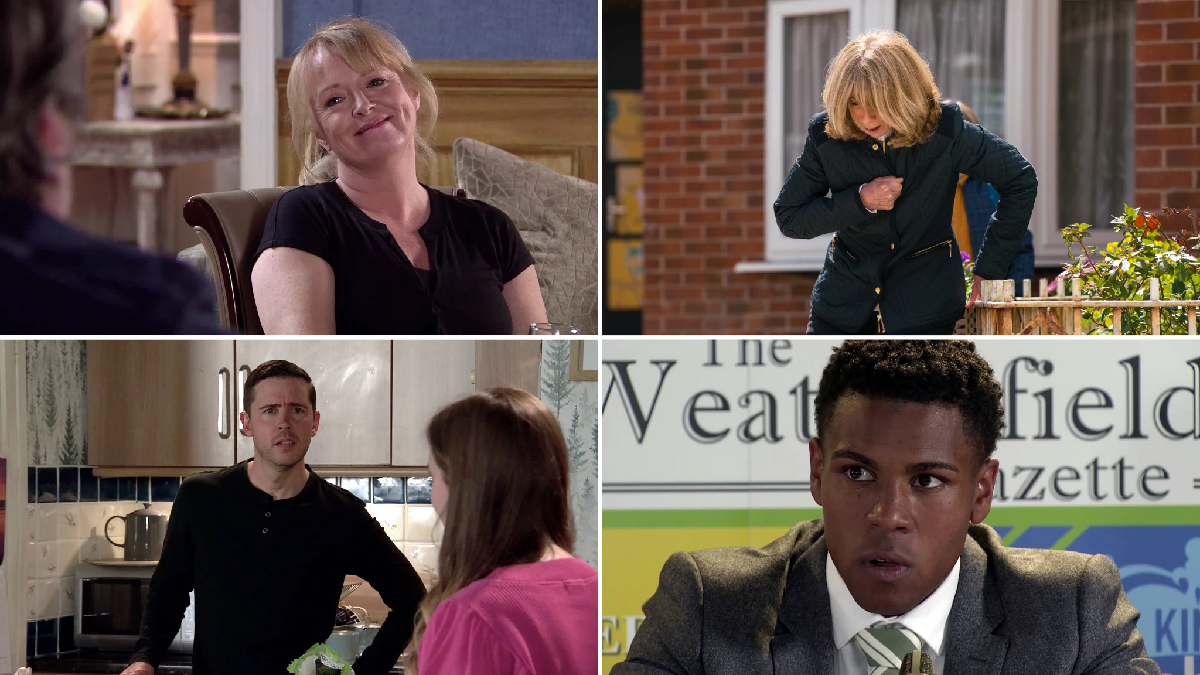 There are more dramas at the heart of the Platt family in Coronation Street and with rows and conflicts flying back and forth, Gail (Helen Worth) can take no more and suddenly collapses.

Elsewhere James Bailey (Nathan Graham) has a huge decision to make after his hand is cruelly forced while Tyrone Dobbs (Alan Halsall) has a shock in store.

Tyrone’s grateful as Fiz helps him organise Kirsty’s funeral and explain to Ruby that her birth mummy has died. Meanwhile Alina masks her fears that she might be pregnant. When she hears in the factory about Tyrone’s past with Kirsty she’s stunned.

Confronting Tyrone, Alina’s hurt that she had to find out from Sally about Kirsty’s abuse because he kept her in the dark. When a tearful Alina then blurts out that she’s pregnant, Tyrone’s floored.

As an excited Jenny heads into town to sort out the mortgage, Daisy masks her panic. Redoing the rota she gives herself all Sean’s shifts but Emma points out that with Sean gone, so too has the hotpot recipe. Daisy tries to play it down while Emma asserts she’s not lifting a finger until Sean’s reinstated.

James’ manager tells him Tommy Orpington is retiring and he’d like to promote him into his place. As James shares his good news with Ronnie, he’s surprised to see Danny at the bar. Danny suggests lunch.

Nick’s saddened that Natasha still won’t let him see Sam. Discovering that Gail is looking after him tomorrow, David forms a plan. Alya reveals that the bank has agreed to repossess the community centre, meaning Yasmeen can pay off all her debts.

Reeling in shock, Tyrone heads to his meeting at the undertakers leaving Alina in tears. As Tyrone struggles to concentrate on the funeral arrangements, Fiz assures Tyrone he’s a great Dad and she’s happy to sort joint custody. Hitting on Alina’s nausea, Evelyn realises with horror that Alina’s pregnant. But how does Tyrone feel?

Jenny’s horrified to read the Double Glammy article in the Gazette. When she discovers that Daisy’s stripped Sean of his shifts and Emma has staged a walk-out, she’s furious and reinstates Sean. Daisy’s humiliated, especially when Jenny reveals she’s looked at her finances and is going to buy the pub herself outright.

As James and Danny catch up over lunch, a couple of lads at the bar take photos. Danny reveals he’s been offered a job in France, James suggests they give it another go, but when James admits it would have to be their secret, Danny heads out. James is gutted, wishing he could live a free life and be himself.

Nick’s choked when he bumps into Sam but Natasha drags him away. Ryan’s fed up when he suggests a night out but Alya asserts she has to work.

David puts pressure on Gail to let Sam see Nick but a stressed Gail’s adamant she must respect Natasha’s wishes. Meanwhile Nick tells an angry Sarah he’s going to sell his shares in the factory as he wants to spend more time with Leanne.

When David then dupes Gail into Sam and Nick meeting another row breaks out at the Platts. Gail heads outside for some air where Sam finds her doubled over and clutching her chest in pain.

James is horrified to see pictures online of him and Danny, along with derogatory comments about his sexuality. He goes to warn Danny but he’s already left for the airport.

As James takes the stage at his promotion press conference he’s asked awkward questions about his private life. James steels himself to tell the truth.

Alya reminds Ryan that if they’re to get their own place, he needs to find some more work. Daisy attempts to cheer him up at the pub.

As an ambulance is called a breathless Gail accuses Nick, Sarah and David of causing her heart attack with their endless bickering. Will Gail pull through?

James looks to his family and taking strength from them, announces that he’s gay. As the journalists bombard him with questions how will James respond?

Having returned from Kirsty’s funeral, Tyrone bottles out of telling Fiz about Alina’s pregnancy and making excuses, heads home.

When Ryan reveals that he’s a DJ, Daisy urges him to reboot his career and follow his heart. When Johnny announces he’s found a new place to live, Jenny suggests a farewell drink and they reminisce over the good times.

Tyrone reveals to Fiz that Alina is pregnant, how will she react? In the Rovers, Tyrone and Alina share their baby news with Kevin.

Nick and Simon spoil Leanne with a champagne breakfast for her 40th birthday. Sarah and David visit Gail in hospital and promise her that from now on, the bickering stops.

Later, Sarah finds out Nick has let down an important client and asserts that until he finds someone to buy his shares, he’d better pull his finger out. Adam suggests he’d like to buy Nick’s share of the factory and put her in charge, Sarah is ecstatic.

At No.3, Danny emerges from upstairs having stayed the night with James. In the bistro, James introduces Danny to Debbie. Later, Danny tells Ed that he’s landed a job as a chef at the bistro.

Summer tells Billy and Todd that she won’t be attending her appointment with the diabetic nurse as she’s meeting her mates at the Red Rec instead. Making sure no one’s about, Summer knocks back an energy drink. Ryan’s chuffed as he reads the online comments about his DJ set.