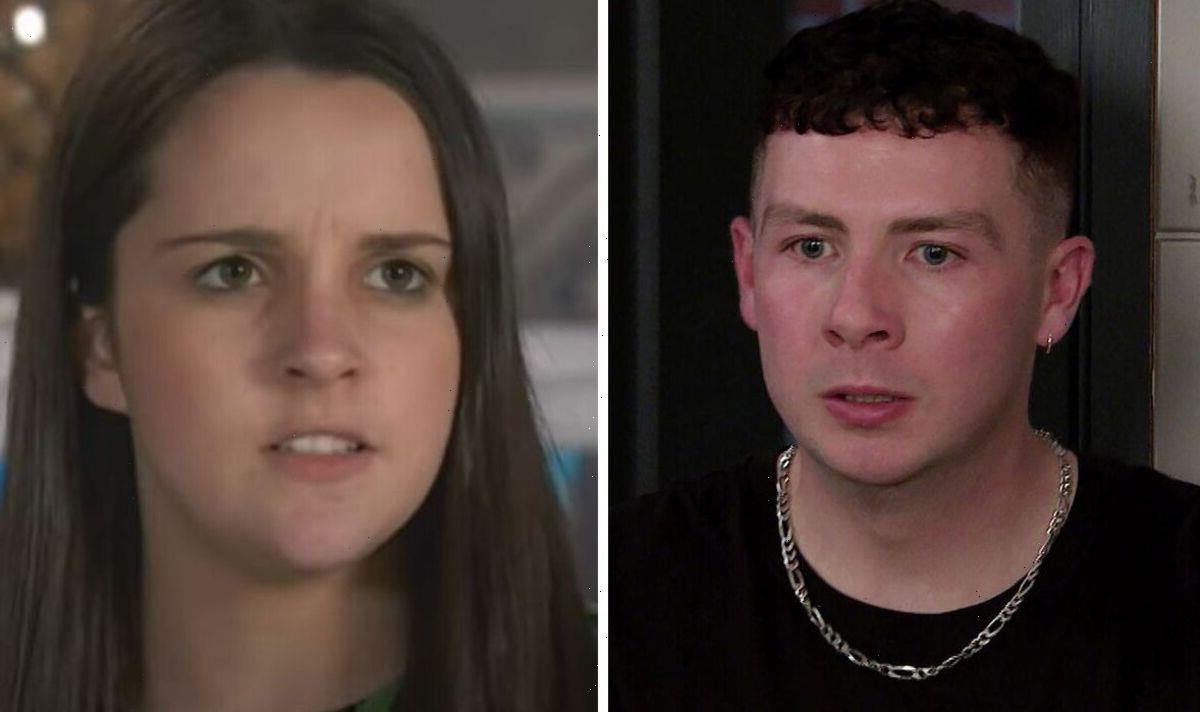 Over the past few months, fans of the ITV soap have watched Jacob Hay (Jack Ryan) try to get his life back on track after stepping away from dealing drugs. However, in scenes set to air next week, his relationship with Amy could be on the rocks as he takes action to save her life.

In scenes set to air next week, viewers will see Damon introduce Leanne (Jane Danson) to a fruit and veg supplier called Dan, as he tells her that he can do a far better deal.

Although knowing what his father is like, Jacob starts to grow suspicious, especially after Damon tells him that Dan’s first delivery is due this afternoon.

With his worries confirmed, he learns that there’s a package containing drugs hidden in one of the crates of olive oil.

Already stressed at the thought of being dragged back into a life of crime, Jacob’s nerves skyrocket when a group of police officers arrive for a retirement party.

Expecting the first drug delivery, Jacob is stressed when the group of coppers have their sniffer dog in tow.

When the crate is delivered, he manages to successfully get the package out and leave the Bistro, although when the dog barks at the crate, PC Craig Tinker (Colson Smith) decides to head for Jacob’s flat.

Back in the Bistro, Leanne and Ryan are left confused as to why the dog started barking as they check through the rest of the delivery boxes.

Elsewhere, Jacob suffers a beating from his dad as he threatens his girlfriend Amy Barlow (Elle Mulvaney), saying if he wants to protect her he needs to leave for good.

Confiding in Nick Tilsley (Ben Price) that Damon is using the restaurant to smuggle through drugs, he admits that he has no other option but to flee as Amy’s life is on the line.

When he hears her enter the flat, Jacob quickly pretends he’s on the phone dealing drugs once again.

Amy’s left horrified as she thinks he’s back to his old ways as she’s faced with a difficult decision on whether or not to confront him.

A theory by Express.co.uk suggests that Amy is furious that he’s been lying to her about his criminal activity and threatens to leave him if he doesn’t tell her the truth.

Not wanting to confess that he’s being threatened to leave Weatherfield by his dad, Jacob allows her to think he’s been dragged back into drug dealing.

Ending their relationship on the spot, Jacob feels relieved that her life may no longer be used as leverage, although it could result in dire consequences when Damon finds out.

The soap star said: “He makes out that he’s back to make amends with Jacob and he slowly starts to build up his trust.

“But, I think that will be to let him back down again.

“He’s just using Jacob for his own benefit, which you get the impression he’s done for a lot of his life.”