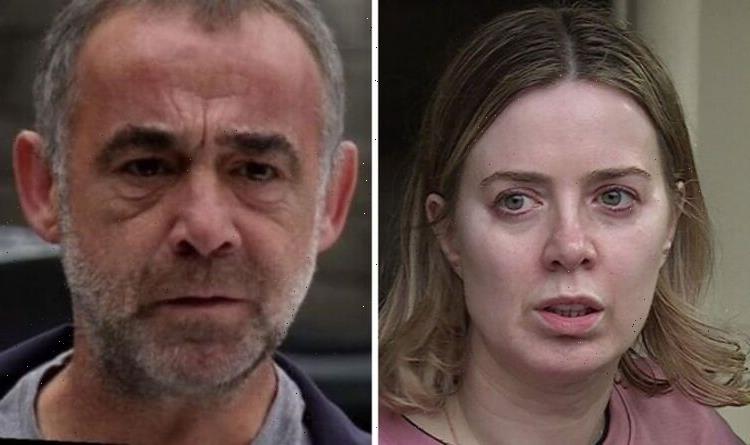 Coronation Street’s newly-married couple Abi (played by Sally Carman), and Kevin (Michael Le Vell) haven’t had the best start. After Abi’s son Seb Franklin’s (Harry Visioni) murder trial, she spent the night with lawyer Imran Habeeb (Charlie De Melo). Kevin knows Abi has cheated on him but believes it was with Tez Wyatt (Stephen Lord). The pair have since split and Abi has gone into labour, giving birth to a premature son Alfie. Abi has abandoned her son but when Kevin learns the truth about who the father is, could he take revenge in the cruellest way?

In upcoming scenes, Abi assures the social worker she’s enrolled in rehab and will do whatever it takes to keep her baby.

When she tells Toyah Battersby (Georgia Taylor) she has to prove she can offer Alfie a proper home, Toyah quizzes Imran about her “ex-client”.

His mind whirring, Imran guesses she’s talking about Abi and tries to defuse the situation before it erupts into something else.

Imran soon tracks Abi down at the hospital, where she admits he’s the father of her baby, leaving him in shock and he asks to see his son.

But as they turn to see Toyah watching from the corridor, will an emotional Imran reveal the truth?

After seeing Abi’s story in the Gazette, Debbie Webster (Sue Devaney) demands answers, assuming the baby to be Kevin’s.

But not wanting to reveal the truth about her affair, Abi hurries out, explaining the baby is having an operation that day.

As Abi waits for news about Alfie’s operation, she’s stunned to see Kevin in the hospital corridor.

Feeling sorry for Abi and putting aside their differences, Kevin takes her in his arms as she breaks down.

With Kevin assuming the baby is the result of a one night stand with Tez, Abi goes along with the lie.

The nurse confirms Alfie’s operation went well, and Kevin offers to let her stay at No.13 until she’s won custody, giving Abi hope.

Imran calls at the garage and reminds Kevin that no matter what the circumstances, Abi’s entitled to maternity pay.

Wanting to know why Imran is so interested in Abi and son Alfie, Kevin could piece together the lawyer is the real father.

If Kevin learns Abi has lied to him twice, he could take revenge on his estranged wife by taking the last piece of hope she has.

Abi has already lost three children with her twins living in Australia – could Kevin run off with Alfie?

Viewers were shocked to find out Abi was pregnant and took to Twitter to air their confusion.

Miss Fee asked: “Didn’t Abi do a test, and it was negative? I’m really confused.”

Michelle added: “But she tested negative and hasn’t put any weight on?”

Roz Laws commented: “I’m confused by Abi’s timeline. Was 6 months ago with Imran? But surely that was before her wedding, and she must have slept with Kevin since then?”

Tania said: “The last time Abbie had sex was six months ago, but she’s been on her honeymoon?”