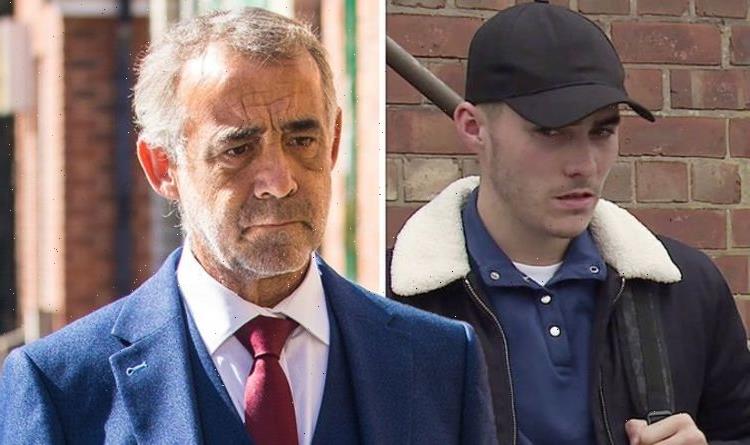 Coronation Street’s Abi Franklin (played by Sally Carman) has suffered a heartbreaking year after she lost her son Seb Franklin (Harry Visinoni) in a brutal hate crime attack. Seb’s murderer Corey Brent (Maximus Evans) was found innocent in court leaving Abi devastated. She’s soon set to marry her partner Kevin Webster (Michael Le Vell), but their wedding day could be hit with yet more drama. According to official ITV soap spoilers, new evidence against Corey will soon be discovered. Will Kevin abandon the wedding to track down the murderous youngster and stop him from escaping?

In upcoming scenes on Coronation Street, Nina Lucas (Mollie Gallagher) tells Abi Corey’s blood-stained clothes had been found and handed to the police.

Meanwhile, when Corey demands he hands over the contents of the backpack Stu Carpenter (Bill Fellows) feigns ignorance.

Later on, Jack Webster (Kyran Bowed) confides in his aunt Debbie Webster (Sue Devaney) that he’s worried Abi is out to kill Corey.

When Abi eventually returns home she’s confronted by Debbie and Jack who show her the letter and demand an explanation.

Desperate to prevent Kevin from finding out, Abi begs Debbie and Jack not to breathe a word.

However, Debbie swiftly gives her an ultimatum, walk away from Kevin and the wedding, or she’ll tell him all about the gun and the letter.

Abi assures Debbie that she’s going to tell Kevin the truth and then she’ll be out of their lives.

Later on, Kevin returns home but is taken aback when he finds Abi packing her bags.

Abi explains how she stole his money and bought a gun, intent on killing Corey, but Nina talked her out of it.

Later, Kevin finds Abi in Seb’s memorial garden and tells her how much he loves her.

He begs Abi to meet him at the hotel where he’ll be waiting to marry her. Will she turn up at the altar?

As Kevin and Jack wait at the wedding venue, they’re soon interrupted by Nina bursting in with some news.

Nina tells them she’s had a call from the police revealing they’re going to reopen the case and arrest Corey.

If Corey finds out the police are onto him, he could make a run for it and try to flee the country to escape justice.

Will Kevin abandon the wedding and attempt to track Corey down?

Kevin is desperate to see Abi happy again as she’s been struggling ever since Seb’s death and the result of the trial.

In a recent episode on the soap, while trapped with Abi in a Victorian sewer, Corey confessed to being Seb’s real killer.

No one else was there to hear his admission of guilt, leaving Abi with no hope for justice.

However, it looks as though the new evidence could change everything and Corey may be put on trial once again if the police find him before he escapes.

Kevin could attempt to give Abi the best wedding present ever by stopping Corey’s escape plan and handing him over to the police.

Will he abandon their wedding ceremony and instead pull off a heroic act for his bride-to-be?

And will Kevin be able to stop Corey in time before he leaves the country for good?