SAN DIEGO – AMC’s “The Walking Dead” isn’t spontaneously ending like the comic book, but there is one major goodbye to come.

Danai Gurira, who plays sword-swinging, zombie-slashing warrior Michonne, confirmed during a Comic-Con panel Wednesday that the upcoming 10th season (premiering Oct. 6) will be her last.

“This has been one of the purest joys of my life to play this role,” said Gurira, who’s leaving to focus on other writing and acting projects. “I’m very thankful for the experience I’ve had, for reasons I can’t express right now.

“It was a very difficult decision, and it’s not connected to my heart. My heart stays right here.” 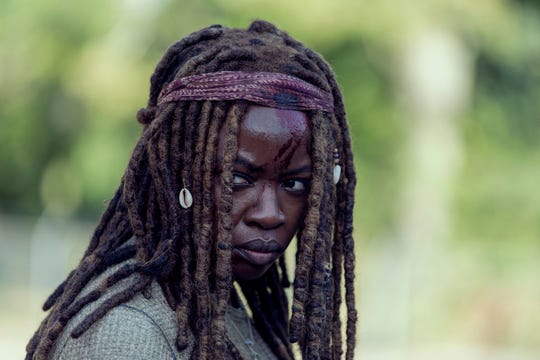 Despite declining ratings for the once red-hot series, “The Walking Dead” universe is still expanding: A second spinoff is due next spring, and a series of movies starring Andrew Lincoln as Rick Grimes are in the works, with the first due in theaters next year. (They were originally planned for AMC.)

But Michonne has lots more to do in the upcoming season: in a new trailer, she’s seen wielding Lucille – the infamous bat  that belongs to Negan (Jeffrey Dean Morgan) – and the good guys are getting ready for war against the formidable Whisperers, villains led by the enigmatic Alpha (Samantha Morton) who disguise themselves in human skin.

Fans want a showdown between Alpha and Carol (Melissa McBride) after last season, and so does McBride: I feel like they deserve one. Carol wants vengeance.”

After dealing with a lot of grief and loss, Michonne is starting to open up again, thanks  to Judith Grimes (Cailey Fleming), Rick’s daughter, whom Michonne has adopted as her own.

“For Michonne, she protects to the end. Stepping into that next phase of opening up again is what it’s all about,” Gurira said.

Norman Reedus’ Daryl Dixon continues to be a leader in a time of severe paranoia for his people, and “he’s watching everyone lose it and trying to pick up the pieces behind them,” Reedus said.

And he might have to work with Negan (Jeffrey Dean Morgan), the “Walking Dead” supervillain who’s been kept prisoner for years yet might need to be unleashed for the fight to come.

“There’s a mutual understanding between those two characters. They might need each other at some point,” Reedus said. “Some of the bad guys are the good guys, and (some of the) good guys are bad guys. We’ve all killed people and done crazy things.”

After a long 10 years in jail, “Negan’s going to stretch his legs a little bit,” Morgan said. “Negan’s relationship with the likes of Judith is as genuine as can be, but Negan is always going to be Negan. Now that he’s out of that cell a little bit, he’s sharp and witty a little cutting with the words he has to say. We’ll see what happens if he gets a weapon in his hands.”