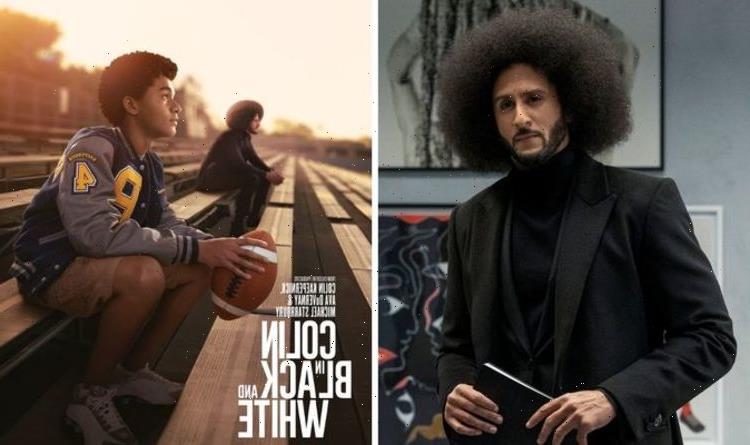 Colin in Black and White is the new Netflix drama from award-winning filmmaker Ava DuVernay. She is working alongside Colin Kaepernick, the NFL star and activist as they tell the tale of the American footballer’s earlier years. The showrunners have brought together an ensemble cast to show what made Kaepernick the activist he is today.

Who is in the cast of Colin in Black and White?

Colin in Black and White viewers may recall the NFL star from 2016 when he made headlines for taking the knee during a national anthem in protest of racial inequality and police brutality.

Kaepernick’s actions inspired millions around the world, with sports stars still taking the knee ahead of sports events today.

For the new series, the star has teamed up with Ava DuVernay to offer fans some insight into what led him to this moment.

The synopsis reads: “This drama series from Colin Kaepernick and Ava DuVernay explores Kaepernick’s high school years and the experiences that led him to become an activist.”

The six-part series will be a self-contained miniseries, launching on October 29 exclusively on Netflix, globally.

Colin Kaepernick will be playing himself in the series, looking back on the events of his formative years.

He will also be explaining many of the racial issues be experienced in his past and are still prevalent today.

Since taking the knee in 2016, Kaepernick has not signed on with any other professional team from 2017 onwards.

However, the star has admitted he is keeping up with the training and is keen to get back to the sport he loves.

The bulk of the series will be set when Kaepernick was a teenager, with Jaden Michael stepping in the sports star’s shoes.

Growing up in a predominantly white neighbourhood to white parents, Kaepernick experienced a lot of social isolation and racial discrimination when he was young.

Some of these events will be shown in the show, ultimately leading Kaepernick to make his world-changing decision in 2016.

Viewers will recognise Michael from Blue Bloods, The Get Down, and Paterson.

Taking on the role of Kaepernick’s dad, Rick, is Parks and Recreation star, Nick Offerman.

Best known for his role as Ron Swanson in the beloved NBC comedy series, Offerman will be playing a much more grounded and dramatic role here.

Rick is Kaepernick’s adoptive father who raised him since the age of just five weeks old.

While his parents are kind-hearted, they can in insensitive to Kaepernick’s Black culture.

Rounding out the main cast is Mary-Louise Parker as Teresa, Kaepernick’s adoptive mother.

As a nurse, Teresa is naturally caring and loves Kaepernick more than anything.

However, much like Rick, she doesn’t understand the importance of Kaepernick’s Black culture and the racial issues he is faced with.

Parker has starred in countless projects, most recently she could be seen in shows such as Mr Mercedes, Billions, and When We Rise.

Colin in Black and White premieres on October 29 exclusively on Netflix.