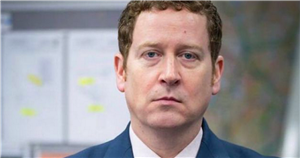 Britain issued a collective gasp on Sunday night as Ian Buckells was exposed as Line Of Duty's fourth man.

But for some eagle eyed viewers the much anticipated big reveal was anything but – as they had been picking up on small clues it was the seemingly incompetent Buckells all along.

As one of the few surviving and as yet unjailed senior officers who had been in the show from the very beginning, for some Buckells, played by Nigel Boyle, was the obvious suspect.

Along with his longevity, they noted Buckells' suspicious behaviour.

Way back in season one we saw him interact with a young Ryan Pilkington, then a child villain, with fans later noting he treated the tearaway to a Big Mac while interviewing him.

Viewers had seen Pilkington make drug deliveries on his bike, deliver burner phones and in one memorably bloody scene even attempt to cut Steve Arnott's fingers off.

Taking to Reddit, one fan wrote: ”Kate interviewed Ryan about Steve’s torture. Straight after that Buckles Comes in he seems worried.

“After Buckles sits down with Ryan, Ryan says “Can I have my Big Mac now?” I think buckles may have bribed him with it.

“I know it sounds stupid but if Ryan was poor and living in a rough area, then a Big Mac would be a massive deal for the kid.”

Pilkington of course would go on to become a bent copper, having made it onto the force despite his misspent youth. In one particularly grisly scene he cut the throat of undercover officer John Corbett, played by Stephen Graham.

Yet Jo Davidson claimed Pilkington was transferred to Hillside Lane at the express request of Buckells.

Fans picked up on this and argued Buckells must be aware of the young copper's real identity and so must be part of the conspiracy.

Then of course there was the fact that Buckells was appointed to the Laverty case by the bent Superintendent Derek Hilton.

This season Buckells was responsible for the paperwork mixup which allowed the OCG or Organised Crime Group to swap Terry Boyle into Carl Banks’s flat at the start of the season.

We also learnt Buckells had coaxed false testimony out of his lover Deborah Devereux to tie Terry Boyle into Vella’s killing.

We then saw AC-12 interview Buckells, after finding a key piece of evidence stashed in his car.

Another suspicious pointer was Buckells record as a police officer.

Incompetent at best, yet still he was repeatedly promoted, from Detective Inspector in series one right up to a Detective Superintendent.

Then there were the more out there theories.

One viral tweet included a screenshot showing golf clubs behind the DS as he sat in his office.

After all the discussion of The Caddy in the first few seasons this was seen as a clear sign. The fan account wrote: "golf clubs in buckles’ office? golf = caddy."

Other fans noted golfing pictures up on the DS's walls, taking this to support this theory.

Of course Dot Cottan, played by Craig Parkinson, had already been unmasked as The Caddy, a nickname he earned carrying the golf bags of criminal Tommy Hunter, played by Brian McCardie.

But despite all these pointers, as a secondary character Buckles was for many fans a surprise choice as the fourth man.

Indeed at 16-1 the Detective Superintendent in charge of the Hillside Lane murder squad was hardly the bookies favourite – some didn't even include him in their round ups.