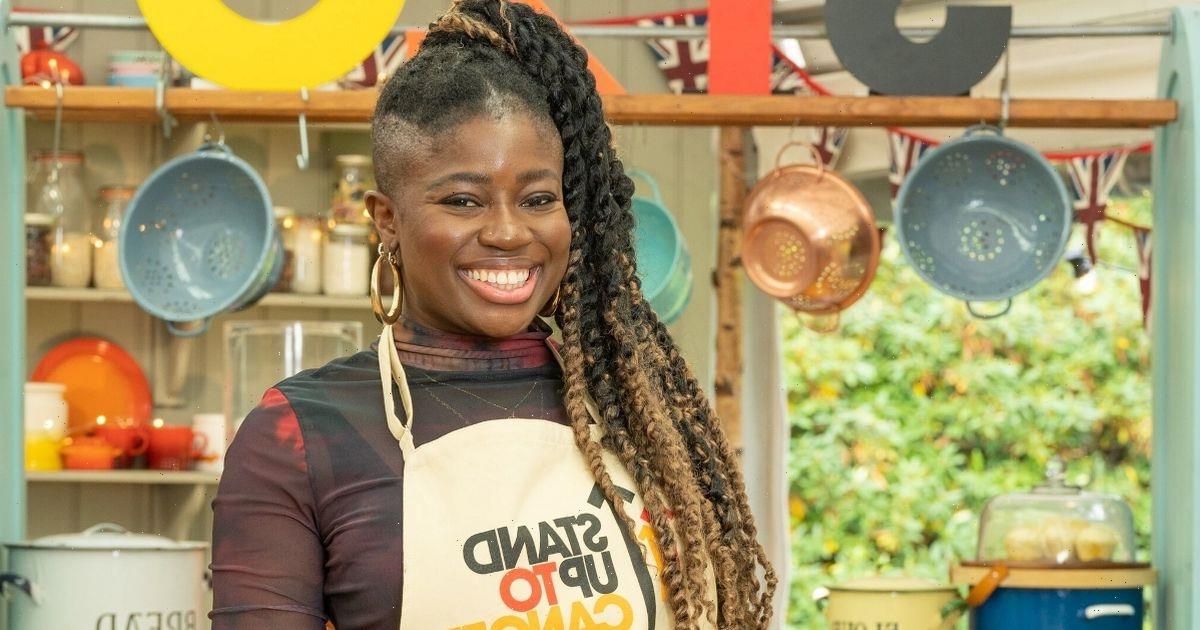 Having braved the Strictly Come Dancing dance floor, Clara Amfo is well used to reality show nerves. But the Radio 1 DJ and presenter admits that donning an iconic apron for The Great Celebrity Bake Off for Stand Up To Cancer brought a whole new level of fear.

For whatever skills she possesses in the kitchen, the star revealed, ahead of Tuesday’s launch show, that she was mesmerised by the baking show’s legendary judges, Paul Hollywood and Prue Leith.

And faced by them watching her across her workbench, Clara felt herself crumble as she attempted to create delicacies that would pass the taste test with the man who’s made a career out of baking and the doyenne of dough.

Quizzed about the culinary challenges, Clara claimed that nerves were definitely getting to her as she said: “Oh yeah, definitely. The intensity of Paul’s eyes, the bright colours of Prue’s glasses frames, it’s really intimidating!”

And that was despite thinking she could bake and hold her own with a whisk and cake tin, before entering the tent.

“I thought I could, but arriving here at the tent with all the other bakers, and going in there with the judges and everything, you really begin to question if you have the right to be here!,” said the star.

And she feared that working how much of each ingredient to add to a recipe and how long to bake it for, could prove her undoing.

Clara said: “I think my strength is my creativity. And I’m really prepared to have a go at things. My weakness is my maths. I had to take maths GCSE twice, so make of that what you will.”

But Clara couldn’t resist trying to rise to the occasion, as a long time fan of the show as she explained: “I’m a huge fan of the show. It’s so good-natured, and so comforting. It’s sort of like your favourite old comfy jumper. I’ve got so much respect for every single person who appears on this show now. You know, when you’re at home, and you’re shouting at the telly ‘No, do this. Don’t do that. Do it quicker.’ But when you’ve been in here, you know it’s a very, very different experience.”

And Clara admitted to having a long-held wish around Bake Off, though it’s yet to come to fruition.

“I’m friendly with Nadiya Hussain, we met at the NTAs a few years back and she promised to make me a red velvet cake,” shared Clara. “To be honest I begged her to. She is so wonderfully busy and successful, so I will stay waiting hopefully.”

It’s no surprise that Clara dreams of tasting former Bake Off champion Nadiya’s wares, as she admits that sweet treats are her snacks of choice as she said: “Oh I’ve got a really sweet tooth! I hate the fact that I love sugar so much. Actually, no I don’t. I love loving sugar!”

A worrying sign perhaps is that when Clara appeared on Celebrity Masterchef, things didn’t go quite to plan.

Clara recalled: “That was quite intense! I hope to redeem myself to anyone who saw me try to make a sweet dish from scratch. I was the first one out. I was out the door!”

Competing against other celebrities in a field outside their comfort zone brings back happy memories for Clara, who competed in the 2020 series of Strictly Come Dancing, and finished sixth with her pro dance partner, Aljaz Skorjanec. “That was the most brilliant, scary but most exhilarating experience ever. I can’t believe it’s been so long since I did it. I’d do it again in a heartbeat. But this appears to be a touch more relaxed – at least I don’t have to worry about anything falling out of a sequinned top!”, the radio DJ recalled.

But when it comes to being named Star Baker, Clara isn’t worrying too much. Because she’s taking part to support a vital cause, the beneficiary charity Stand Up To Cancer.

“In the past few years, four lovely women that I know, of my age, have been diagnosed with cancer, and it really hit home to me how universal and cruel cancer is,” explained the 37 year old, who hails from Kingston-upon-Thames, and was a Brits presenter this year alongside main show host Mo Gilligan and Maya Jama.

“It doesn’t discriminate between class, or gender, or race, or sexuality, it can happen to anyone," she said. "The women that I’m talking about are such vibrant, incredible people, and the thought of them not being around is… well, you just don’t want to think about it.

"And it’s not just the person with the illness, it affects everyone around them that loves them. That’s why Stand Up to Cancer is so important – we need to fund research that could be life-saving.”

For more TV gossip, sign up to OK! newsletters here.