Christine Lampard, 41, was on hand to present her final show of Lorraine for the next two weeks on Friday and following through with her duties in the roles, she spoke with the Good Morning Britain team half an hour before the ITV chat show got underway. With the UK set to experience one of its hottest days on record, GMB’s Ranvir Singh, 42, and Adil Ray, 46, joked they had run out of ice lollies which would have helped their colleague cool down. Joking about how she would react to not getting one, the Ackley Bridge star teased her about what she would be like behind-the-scenes with the crew of the chat show. 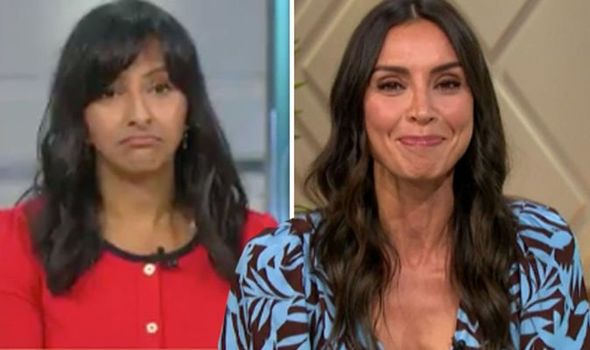 Ranvir began the discussion as she said: “Christine, I did ask if I could send you some lollies over but apparently, the crew have eaten them all.

“So, you’ll have to get your own to cool down this morning, I’m afraid – selfish this crew over here,” she continued.

“Oh your crew, I was looking at my crew over here,” Christine replied, joking they wouldn’t leave her empty-handed.

“They daren’t do that,” Adil quipped, going on to add: “We’ve heard about you Christine,” with the presenter in hysterics over the comments.

Despite all the comedy, the chat show host managed to regain her composure and informed viewers about what was coming up on the show.