Chris Packham and Megan McCubbin were back presenting Autumnwatch together and during one segment, they were informing viewers about the reasons why plants have a distinctive smell. But, the lengthy explanation was overwhelming for Chris and he had to leave his presenting duties for a moment to himself.

“I want you to brace yourselves right now, because we’re going to tell you something which will quite literally blow your mind,” Chris teased.

“You’re going to need a mindfulness moment after this – no seriously, this is pretty spectacular. Megs, over to you.”

“Of course, when we go out into the woodland, one of the main things we notice is the smells we pick up on,” she began.

“But what is the purpose of that smell? What’s it all about – there’s got to be a reason for it. And there very much is.” 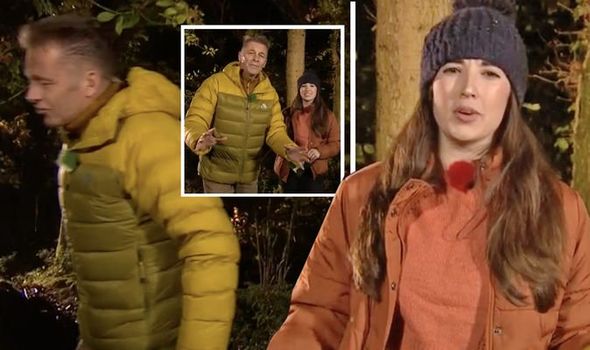 Together, with a cardboard image of a plant in a pot, Chris and Megan demonstrated how a plant reacts and signals for help when it is under attack.

“It’s the green leaf volatiles [which the plant creates when it is being attacked by a caterpillar] that we all smell when we walk into the woodland or with cut grass,” Megan continued.

“Essentially, that is a chemical signal – the way plants communicate with one another – to say ‘this plant is being attacked’ for all of them [the other plants around] to mount their defences.

“But, now hold your horses a minute, this is where it gets really exciting. 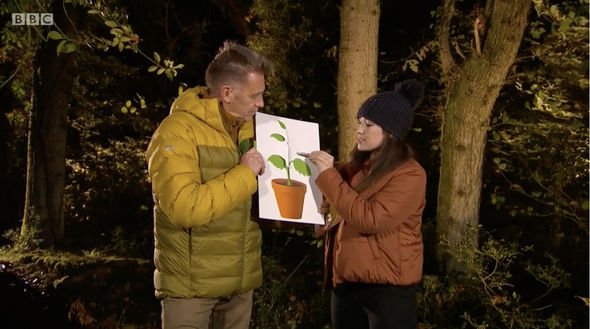 “Some creatures have learnt to associate the green leaves’ volatile smell with prey.

“Predators will take the caterpillar which is damaging the organism and consume it – so essentially, plants are not only speaking to one another, but they’re calling for help from their attacker’s predator,” Megan concluded.

“Yes!” Chris exclaimed. “Plants are talking to animals that then come and predate the things that are harming the plants.”

“Come on!” Megan whispered and Chris continued: “I mean, seriously, you couldn’t make this up, could you? 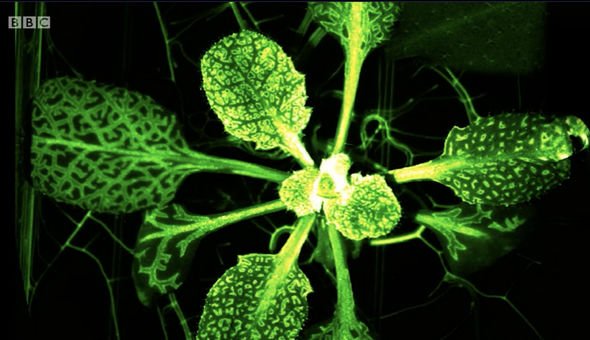 “It’s like Avatar, it’s that connectivity, and when you gaze up here… that’s just the simple part of it, what’s going on here is far more complex, far more exciting.

“I’m going to have to go for a mindfulness moment, it’s just so good,” and with that he walked off, out of the camera view.

Megan was left to finish the segment and hand it over to their co-star: “Oh dear,” she said.

“Now I think we all need a mindfulness moment after all that.

“Chris has gone for a lie down, he’s put his feet up!”