Channing Tatum put a lot of work into his role in 2011’s The Eagle. However, there was no way to prepare for a horrendous injury that he would get on set. Tatum once revealed how he terribly burned his penis on The Eagle which left him having a “complete panic attack” on the set.

The Howard Stern Show interviewed Tatum and brought up the mishap regarding his penis on The Eagle. Host Howard Stern set the stage for the story, allowing his guest to fill in the rest of the details.

“It was freezing out, the way I understand it,” Stern explained. “It was so cold that some of the guys would take warm water and pour it down their pants. Some a**hole handed you the cup of warm water that you could pour down your pants, except he forgot to tell you that it was scalding hot.”

“Yeah, boiling,” Tatum emphasized. “I started hyperventilating and screaming, jumping back into the river because it was a hypothermic river. We had wetsuits on, which was the worst part about it.”

However, Tatum surprised Stern when he expressed feeling quite bad for the man who gave him the water in the first place.

“So, this poor guy, I gotta be honest,” Tatum said. “Look, he had been for 13 hours running up a hill for like 15 minutes to boil this huge bottle of water, fill it half full with actual kettle water, run back down the muddy hill, and then put the river water in it. Then, come over to me just to keep me warm all day.”

Tatum further recalled: “Then, when we wrapped the day, I started walking up the hill and what happened is he just didn’t get all the way down. So, we had done 13 hours of the same thing every time we saw each other. He’s like, ‘You want to warm up for the walk up?’ Of course, I was like, ‘Yeah, why not.’ It was the worst thing.

“You know when you burn your finger and it just keeps burning?,” Tatum asked Stern. “It kept burning for the next probably 20 to 30 minutes like I was having a complete panic attack.” 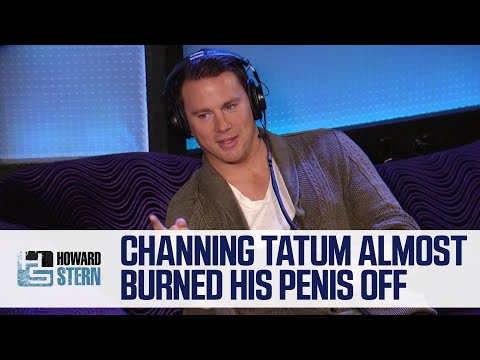 Tatum told Stern that an ambulance had to come to the set of The Eagle to take care of his burnt penis. He was lucky that the situation wasn’t worse, but he remembered a funny situation that he had with one of the medical professionals.

“That was when one of the ambulance dudes, he was like, ‘Look, man, I know this is no fucking consolation now, mate, but it’s a good thing that it hurts,’” Tatum recalled him saying. “‘Otherwise, you’ve got nerve damage.’ I couldn’t. There happened to be a radio playing and it was “Your Sex Is On Fire.’ The driver was like, ‘Maybe we should change this.’”

Tatum and Stern laughed about the entire ordeal.

“I would say I was good almost a week later,” Tatum responded. “It was a little rough, but we got it done.”

The pair joked about how “masculine” it was of the actor to jump right back into physical activity so quickly.

“I gotta be honest, the doctor gave me these bandages,” Tatum said. “I was like, ‘OK, cool.’ I put the bandages around it and I didn’t think that I didn’t put any of the gauze, so I went down to the bar the next day and I was drinking beer.”

Tatum continued with his traumatizing story: “Next thing you know, you gotta go to the bathroom. I went to the bathroom and I realized that I didn’t get all of the tape onto the gauze. So, it was on the bottom, so I’m basically on my knees in a bathroom in a pub in Scotland. It’s so sad. I’m peeing from my shriveled, burnt penis.”