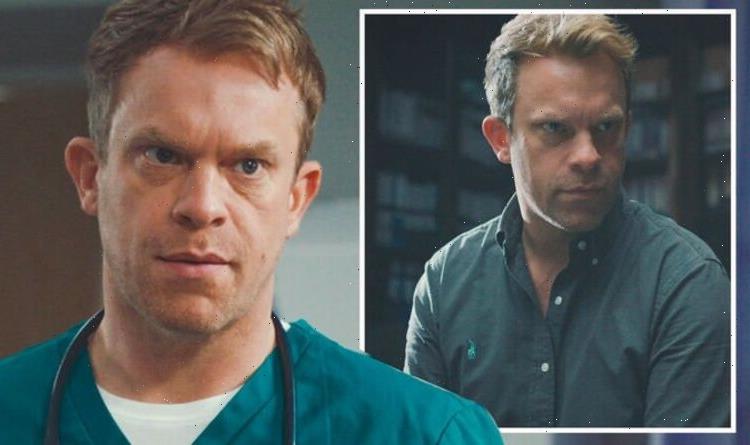 Dylan (played by William Beck) has been involved in a huge storyline for the past couple of months on Casualty with a patient called Paula (Rosie Jones), who has been in a custody battle with the courts to be her child’s guardian. The beloved BBC medical drama character has been supporting the mother of two through one of the biggest challenges of her life, with the likes of Jan Jennings (Di Botcher) also being on hand to help. However, when it seems all avenues are exhausted and with the potential of the child ending up in the care system, Dylan could revaluate his own future on the television drama.

The drama continues in Saturday’s episode as it is the morning of Paula’s hearing in which she will find out if she is allowed to take her baby, Ena, home with her.

After accidentally believing the mother of one was drinking again last week, Dylan is desperate to do anything he can to make amends.

Therefore, when he sees her with a nasty cut on her head, the doctor jumps into action and tries to patch it up as he thinks this will reflect negatively on her.

Once she has her chance to speak with the judge, all of Paula’s fire and determination pours out as she makes a speech about how she wants to do things differently with Ena.

Having regrets over how things ended up with her other daughter, Maisie, she tells the courts she will stay sober if she’s given the chance to be a mother again.

It is up to the judge to deliberate and both Dylan and Jan sit with Paula as she waits to hear the outcome of her hearing.

In one of the most heartwarming turn of events in this storyline, the mother of one is granted permission to take full custody of her baby.

Dylan’s former patient is delighted with the news but she knows this isn’t the end of her struggles and there will be many more on the horizon.

Unlike other episodes of the medical drama, this one follows Paula through the duration of a week to see how she is coping with being a single mother.

Just like all new mothers, the challenges come thick and fast, with viewers seeing how much Paula is struggling when Ena won’t stop crying.

Wanting to support Paula in the first few weeks and possibly months of having Ena back in her life, Dylan offers to help.

However, the mother of two is determined she can do this on her own and pushes any source of support away out of fear she will crumble.

When a social worker calls around to see how the mother and daughter are getting on, they pick up on a number of faults.

This makes Paula feel disheartened and makes her believe she is not good enough to be a mother to her young child.

Not sufficed with his help being rejected, Dylan goes on a call out to see Paula and check to see if everything is alright with Ena.

Unfortunately, when he gets there, he discovers Ena is just lying in her bed and realises the mother of two is out of her depth.

When he finally gets through to Paula, Dylan wants her to realise how dangerous the situation can get if Ena isn’t watched like a hawk 24/7.

He encourages her to seek out more help and especially at night when she might be feeling really tired from looking after the baby all day.

Seeing this as a criticism of her being a mother, Paula instructs Dylan to leave her alone and forces him out of her house.

It’s not too long after he’s left, the mother of two discovers her baby is covered in a rash and has a high temperature.

Rushing into the Emergency Department at Holby City hospital, Paula gives her baby to Dylan as she trusts him to take care of her.

As Ena is taken care of and Paula gets a moment to revaluate everything, she tells Dylan she isn’t sure she can manage alone.

The beloved doctor encourages her to make a decision about her future but what he might not expect is for her to ask him to take over guardianship of her baby.

Of course, Dylan would be shocked by the news, never thinking there would come a time when he would have to step up and be a father.

Especially given the child isn’t his, he would really have to consider whether he thinks he would be up for the job.

Knowing Ena would need to have his full attention, Dylan could decide he is going to quit his job if the courts approve him to have custody of her.

Although fatherhood has been on the cards a couple of times, he never thought there would be one last chance for him to have a child.

Having seen the struggle and determination Paula had to care for her daughter, he could allow her to still have access but with him as her primary carer.

The pair could decide to move away from Holby as they know there are too many ghosts from their own past lingering around.

Ina heartbreaking end to his time on the show, Dylan could end up getting the ending he was always meant to have.

Casualty continues tonight at 8:35pm on BBC One.