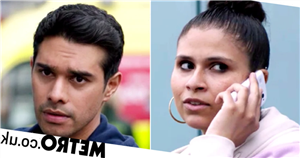 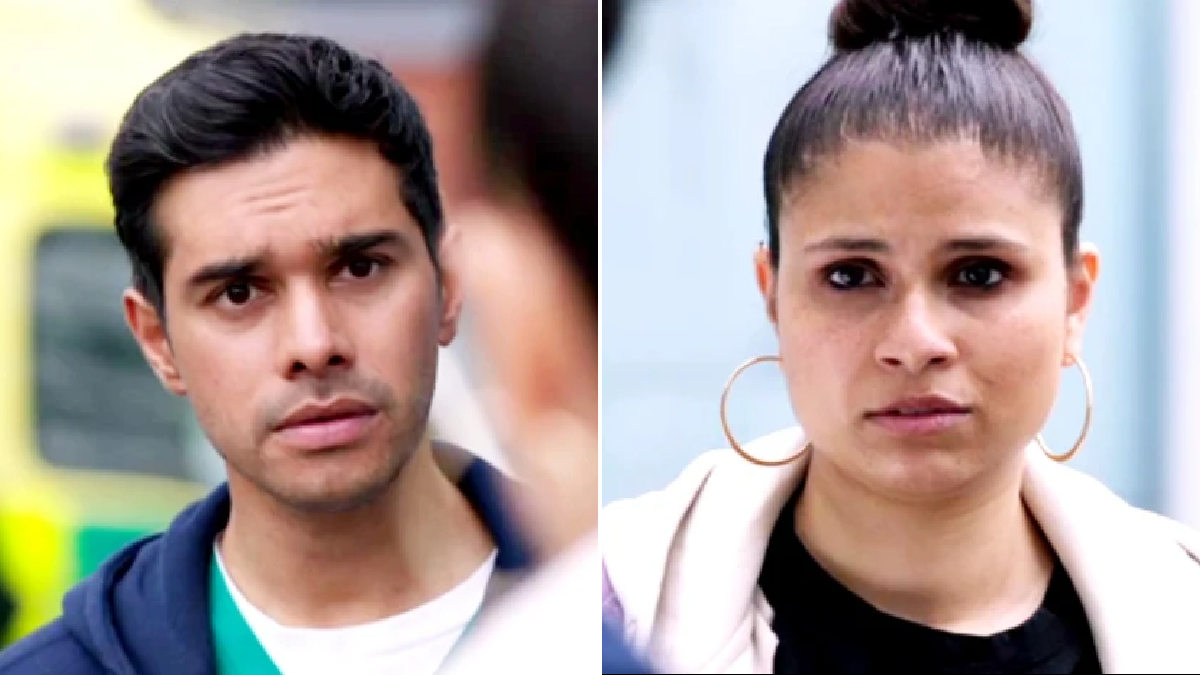 Holby’s notorious Farmead estate has appeared many times in Casualty over the years, and currently there’s gang warfare raging between Farmead and its rival, Bridgeway.

Rash Masum (Neet Mohan), one of the ED’s quietest, gentlest, most unassuming doctors, has managed to get himself stuck right in the middle of all this because of his connection to a woman called Hafsa (Zainab Hasan), the sister of one of his oldest friends.

She told him she was a youth worker who was trying to keep young people out of trouble, but we discovered in tonight’s episode that she’s actually recruiting them to be drug dealers.

When a boy that Rash had previously befriended was stabbed by a member of the rival gang, Hafsa brought him back to Rash’s flat to be patched up. The fact that Rash didn’t go to the police about this has apparently given Hafsa confidence that he’s on her side and she asked him if she could call on him if anyone else needed medical help.

Rash agreed, but then we saw Hafsa telling someone on the phone that she’d just recruited a doctor. ‘He’ll do what we tell him,’ she said.

As we’ve already seen several people being stabbed, and a man with a knife storming into the ED in pursuit of someone he was having an argument with, it’s clear that Rash has got himself involved in a situation that’s going to be hard and dangerous to get out of.

The other main story of the episode was the quest to find the next clinical lead for the department, given that Dylan (William Beck) was more than ready to give up the world of admin and get back to doing more of the medical stuff he enjoys. Hanssen had sent a representative, Ms Cage, to tell Dylan that the board wanted him to stay on in the job. ‘I don’t know what part of “no” confuses you,’ he told her, but she gave him until 5PM to make a decision.

The other two candidates for the job were Stevie (Elinor Lawless) and Ethan (George Rainsford), and Dylan had already detected that Stevie has a problem with Ethan when she appeared more than ready to throw him under a bus in a meeting. Dylan is aware of Ethan’s Huntington’s, and when he saw his hand spasm just as he was about to do something delicate involving sharp scissors and a person’s eyeball he stepped in and covered for him.

Ethan later told him that he’d stopped taking his medication after Fenisha died, because there didn’t seem much point in carrying on. Dylan told him he’d either have to take the medication or step back from treating patients, but his attitude was supportive and kind.

When Charlie (Derek Thompson) told Dylan that the second choice candidate for the clinical lead job was Stevie, he realised that this meant bad news for Ethan because she would find out about his Huntington’s and use it against him. He doesn’t know what Stevie’s problem with Ethan is, he just knows it’s personal and to protect Ethan (and possibly the rest of the department) he decided to take the job himself.

The new series begins Saturday 8.45pm on BBC One. pic.twitter.com/ssSalGwZkI

Stevie had assumed that she was going to get the promotion and she was visibly fuming when it was announced that Dylan had got it. He told her he’d made the decision because as a department they all had to support each other.

‘Seeing you eviscerate Ethan, I wasn’t sure you understood that.’ It’s fair to say that Stevie has just added Dylan’s name to the list of enemies she needs to deal with.