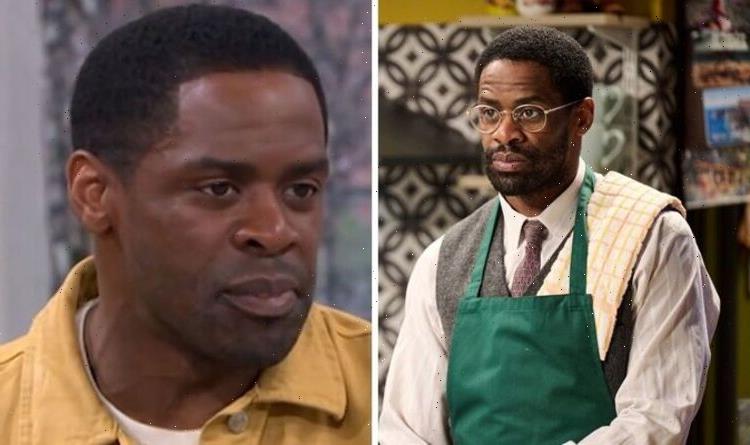 Brenda Blethyn and Okorie Chukwu joined This Morning hosts Holly Willoughby and Phillip Schofield to discuss the upcoming second series of their sitcom Kate & Koji. During their promotion of the series, talk turned to the pair working together for the first time, where Okorie revealed what Brenda is truly like to work with.

After discussing the second series of Kate and Koji, Holly asked: “How is it for you working with Brenda?”

Okorie teased: “I mean, you know I hope she can block out her ears a little bit!

“She has been amazing, and you know, as an actress and as a person, more importantly, so warm and so giving.

“Just taking on so much from how she is, the hardest thing is not laughing because she will just pop out with these funny moments, and that is what the audience are waiting for!”

Discussing the return of the show, Okorie opened up on how he felt being asked to replace Jimmy Akingbola.

He said: “I think I read the script, and I really felt a connection with Koji, when the job was offered, I did think it was an unusual way to onboard the show.

“But, it was a hit show, and I thought it was an amazing comedy, a bit nervous, but everyone was so welcoming and so warm and the way the team got me involved.”

Brenda added: “It was a very easy transition actually because we had missed a year because of the lockdown, there has been a two-year gap.

“So coming to it fresh for all of us really, and we just love Okorie, we love him as Koji!”

Kate and Koji season two faced serious delays in filming due to the Covid pandemic, which led to a clash in schedules for Jimmy.

The actor had signed up for HBO’s The Fresh Prince of Bel-Air reboot and this meant he wasn’t able to film the second series of the ITV sitcom.

Due to the change in Jimmy’s schedule, the creators were forced to find a new actor to replace Koji, which is where Okorie landed the role.

Last year, Brenda opened up about the uncertainty surrounding the second series and was worried about upsetting fans.

She told ITV: “I was due to start Kate and Koji in the studio in January 2021, but there were too many challenges, you couldn’t have a studio audience.

“I’m playing a character who is serving tea and sandwiches all day long, and because of Covid protocol, I wouldn’t have been able to pass anything to anyone else.

“And of course, we had to stay two metres apart. So, the producer has delayed it until after I’ve finished work on Vera later this year.”

Fans were delighted to find out that the ITV sitcom was finally returning for a new series and took to Twitter to express their excitement.

Pat Tee wrote: “So excited to see another series #KateAndKoji is coming to our screens!”

Kelly added: “Looking forward to new series of #KateAndKoji some light relief from what’s going on in the world.”

Sienna Jamieson commented: “Kate and Koji coming back has made my whole year! I am beyond excited to see Okorie as Koji in the new series.” (sic)