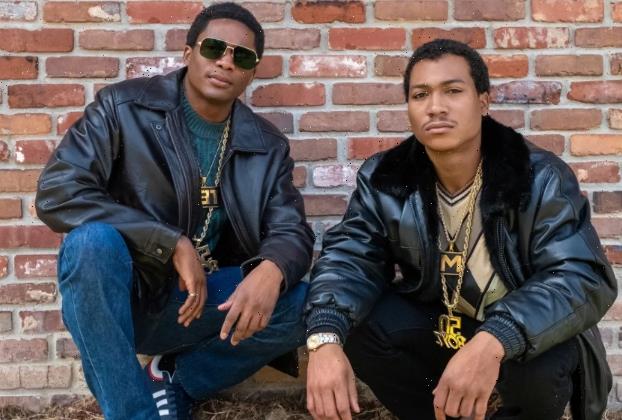 The theme song for BMF is a banger. Rapper and executive producer Curtis “50 Cent” Jackson spits the lyrics for the Starz crime drama’s title song, “Wish Me Luck,” while R&B legend Charlie Wilson croons the hook.

There’s just one problem: BMF is set in Detroit and tells the story of city natives and kingpins the Flenory brothers — Demetrius “Big Meech” and Terry “Southwest T” — so why not use Kash Doll? She’s a local rapper who has a recurring role on the show as Monique. Eminem, who will appear later in Season 1 as Rick Wershe, aka White Boy Rick, is also a homegrown rap star.

But sometimes, you just have to let 50 Cent be 50 Cent, says BMF showrunner and native Detroiter Randy Huggins.

“The bottom line is 50 and I have an excellent partnership,” Huggins tells TVLine in earnest. “He doesn’t tell me how to write my show, but he has suggestions. When it came to the theme song, I suggested he put Kash Doll on there. Then I suggested it a second time. Maybe even a third. Same thing with the script s–t. He may have said something, and I didn’t respond, and he might have said it again. Then he left me alone.” 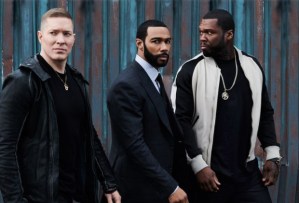 That’s the level of thoughtfulness each man has for the other, Huggins adds.

“We respect each other’s lanes,” Huggins continues. “It’s probably one of the most beautiful things about our partnership. We’ve been working together since Power. I used to write a lot for his character Kanan, so we’ve spent a lot of time together and work well together.”

When it came to music, there was one battle that Huggins won. He wanted to play Sammy Davis Jr.’s “Hello Detroit,” while several of the other producers argued that only Detroiters would get the musical reference.

“I fought for ‘Hello Detroit,’” Huggins laughingly recalls. “They said we should have an Al Green song, and I said, ‘No, sir.’ I’m glad I was able to win that one.”

Huggins also didn’t see what was so special about Demetrius “Lil Meech” Flenory playing his father on the series, although 50 Cent saw the fledgling actor’s potential from the start. But over time, the younger Flenory impressed Huggins, who is now one of his biggest fans — save one thing.

“Lil Meech doesn’t sound like a Detroiter,” Huggins mockingly exclaims. “He sounds like he’s from Miami because that’s where he’s from.” 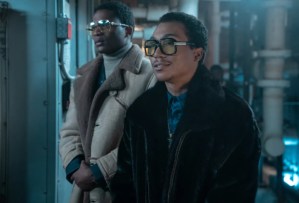 While many have applauded Flenory’s ability to channel his father and a convincing Detroit accent, Huggins is sticking to his guns, and Flenory and a lot of others will have to politely agree to disagree with him.

“I love Randy, but he be hating on me a little bit,” Flenory says with a laugh. “He be hating on my Detroit accent, but I know how people in Detroit talk and sound. My accent on the show came naturally because I spent a lot of time there when I would go and visit my grandma, even after my dad got locked up.”

But more than anything, Flenory says he wants to make his father and family proud of his performance. “It’s an honor to play my dad,” he concludes. “And I can’t mess this up.”