Spoiler alert! Do not proceed if you have not watched the season 8 premiere of The Blacklist.

You knew it was coming, but that doesn’t mean that it hurt any less. The Blacklist season 8 premiere doubled down on Elizabeth Keen’s allegiance to her mother, Katarina Rostova, as she chose to go all-in on her betrayal of Raymond Reddington and her closest friends at the Task Force — even after discovering that her mom wasn’t all that trustworthy to begin with.

'The Blacklist' Season 8 Sneak Peek: Liz Promises Her Loyalty to the Task Force, But Is She Lying? (Exclusive)

'The Blacklist' Season 8 Sneak Peek: Liz Promises Her Loyalty to the Task Force, But Is She Lying? (Exclusive)

On Friday’s season opener, which carried over storylines that were left unfinished due to the pandemic, Liz conned everyone in her inner circle as she began to embrace her dark side amid her search for the truth. If Reddington was surprised by Liz’s move to align with the enemy (for now), then he hasn’t been paying attention. From the very beginning, he’s guided her to be ruthless and to think like a killer mastermind. Now, he’s unwillingly seeing the fruits of his own labor.

But that’s not to say all hope is lost. In what seemed to be a moment of vulnerability, Liz reached out to Ressler following her betrayal to the team, a move she felt she had to make to seek answers from Dom (played by guest star Ron Raines). And while it appeared, at first, that the two colleagues-turned-more-than-friends were sharing an intimate conversation of reflection and regret, it turned out their kiss — rejoice Keenler fans! — was merely a ploy on Liz’s part to escape. Or was it?

ET spoke with executive producers Jon Bokenkamp and John Eisendrath about Liz’s betrayal, why next week’s episode “defines everything going forward” and how that kissing scene between Liz and Ressler actually came to be in the time of COVID.

ET: Even after Liz tries to reassure the team that she’s loyal to them, she keeps to her word and ends up turning on them in the end — sticking by her mom. Is Reddington fully to blame for her betrayal? What are we to make of the conversation Harold has with Red?

John Eisendrath: The consensus of opinion among the people that Liz knows and care about her, is that Red is responsible for her going from the sweet, innocent person that we met in the pilot to the person who is on this quest at the moment. That doesn’t mean that I think this is why it’ll be a good story for everyone this year. It doesn’t mean that they’re OK with whatever she’s willing to do. It doesn’t mean that they will not ultimately feel as if they have to go after her if she does something that breaks the law. But I think Harold does sum it up, in that scene with Red — where he is mad at Liz, but he is livid at Red — because he does hold Red responsible for taking Liz down this path.

There were still remnants of the Liz we’ve known for the past seven seasons. Even as she’s making this decision to turn against the Task Force, she has doubts about the fact that she made the right move, considering how untrustworthy Katarina is. How does she reconcile that, or does she?

Jon Bokenkamp: I think it is an ongoing struggle. In the previous episode, we saw the conflict on her face having stolen Dom, wondering if she’s done the right thing. But it’s not a choice she can go back from, right? I don’t think she can turn back from this. She knows that and she wants answers at any cost. So looking ahead, it begs the question: How does she navigate that? What does this decision do to her? How does she navigate this darkness? Either it’s within her and always has been or maybe it’s partly learned from Reddington. He told her in the pilot, “Think like a criminal.” Well, she’s finally doing that and the consequences of that are going to be grave. How that defines her, what that does to her, really is question of the season.

We see the Task Force struggling with the fact that Liz has essentially conned them all. It seems like it’s going to be difficult for Liz to get back in their good graces, if that is even in the cards. Is her relationship with the Task Force frayed forever?

Eisendrath: I look at it as a family drama and they’re all part of a family. So one member of the family, Liz, is both in trouble of her own design and because of the things that Red has done that have pushed her in the direction that she’s gone. As people who love her, they will want to forgive her and they’ll want to look the other way over some of her transgressions. They will be challenged for that empathy. That support definitely will be challenged. They will ask themselves [hard questions] and they will disagree among each other, like any family does, about whether they should look the other way, about whether they should be OK with what she’s doing. There will be great scenes and stories with the Task Force, figuring out for itself how to respond to what Liz is doing. Do I think that they can ever repair their relationship? Yes, like every family, there’s almost nothing that can get done inside a family that can’t ultimately be repaired. 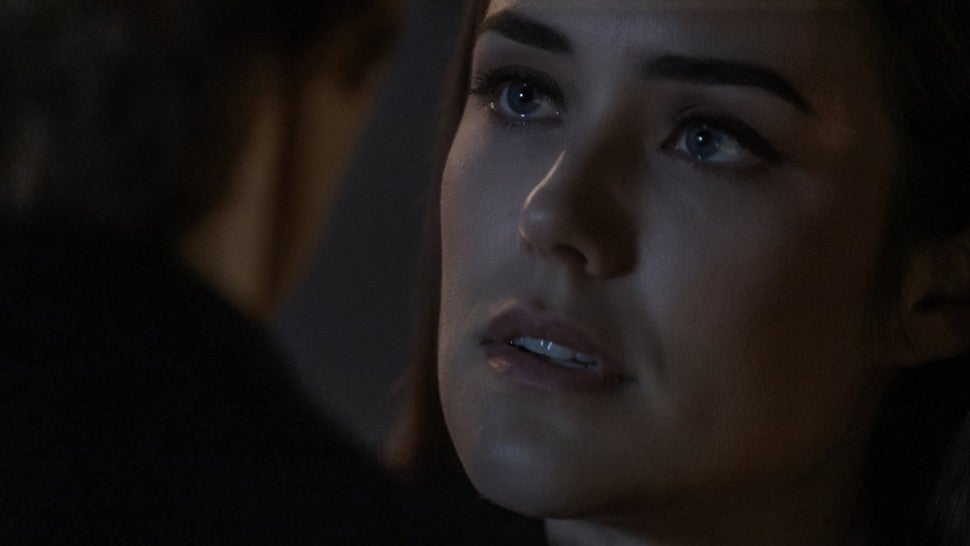 Ressler seems to be the one person who has a soft spot for what Liz is going through, and in an emotional moment of vulnerability for the two characters, we see them kiss. Of course, it’s a complicated kiss — Liz does it to take Ressler’s gun. When did you decide to go for it with those two and planting that seed for a possible romance?

Bokenkamp: We’ve hinted at it for a while, right? It’s an interesting arc. He was the most suspicious of her in the beginning, probably of anybody. Why her? Why did Reddington choose her? Who was this woman? And their relationship has grown to where they trust each other and they have been through a lot together. I think that relationship coming together probably coincides with them being torn apart. The very idea that this is probably the worst possible time for them. For any of this to come about with any of these feelings, this is a horrible time for that to happen. And that’s probably why it’s the right reason for it to happen now dramatically, just to see the push and the pull. The kiss that happened at the end of the first episode was both organic and real, and also a betrayal. It’s something that she felt, that they both felt, and that organically happened. And yet, it was a means to take Ressler’s gun and get away. The murkiness of that, the way in which it’s overly complex, is what’s good about it and what’s interesting going forward. Seeing how they navigate this and these feelings and how that impacts the story of the truth that she’s looking for, it’s a big part of the story.

Eisendrath: The kiss reminds me that it was also difficult to do a kiss in the world of the pandemic. And so, they were each kissing a mannequin.

Eisendrath: Uh-huh. We’re proud of the fact that it doesn’t appear as if [that’s the case]. When you watch it in general, it doesn’t feel like it’s really at all, despite the fact that we’re filming in the pandemic and that is the most clear example.

Bokenkamp: I think it works though, because the episode was directed by Andrew McCarthy. And he has experienced mannequin romance. He did a fantastic job.

What is Red’s mindset moving forward? What’s his next move now?

Eisendrath: Red can take on anyone relatively easily, certainly emotionally, except for Liz. Liz is his emotional Achilles heel, and this is a much more difficult task for him than we’ve seen in the past. He had very effective adversaries in the past, but none of them had the emotional hold-over on him that Liz does. To have to try and figure out and navigate how to go up against her is going to result in new and much more difficult challenges to Red than we’ve seen him face in the past.

Dom is still a key presence in the premiere and in future episodes. With Brian Dennehy’s death in April, how much maneuvering did you feel you had to do to keep that character alive?

Bokenkamp: We recast the role. Ron Raines is the actor who plays Dom now. After we lost Brian, we felt that the character of Dom is interwoven with the fabric of the mythology of the show and to boost the character, there’s story there that needed to come out. So we made the decision to recast with Ron Raines, who I think did a really fantastic job and is great as Dom. I think audiences will see that that’s why he’s such an important character here soon.

Eisendrath: I will presume that like most who watch the episode, the actor who we cast looks so much like Brian. I think they’ll think that it’s Brian Dennehy. 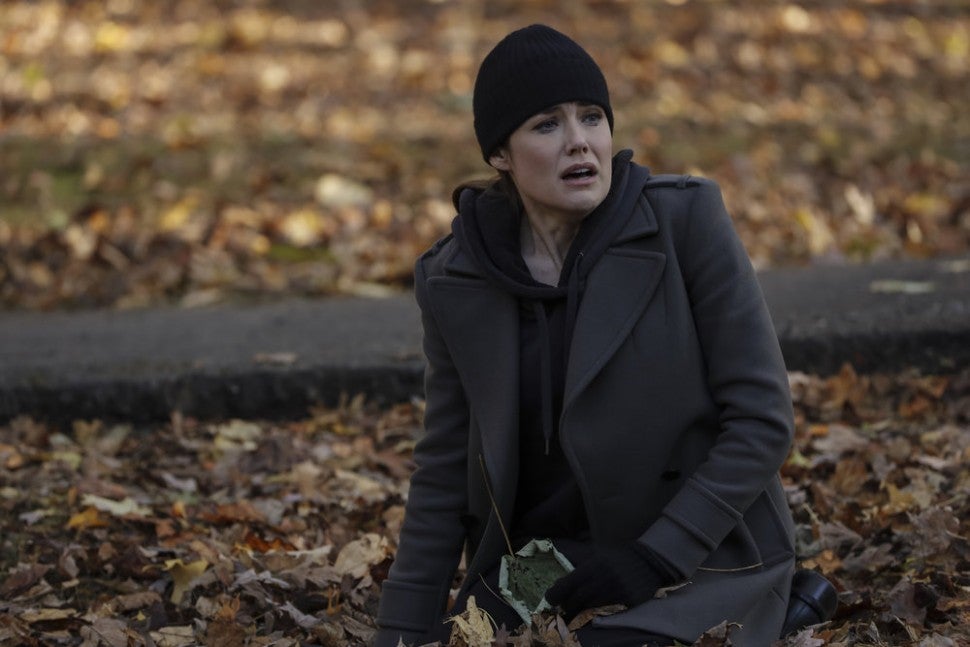 Red’s underlying condition is something he’ll have to address and he briefly talks about it in the premiere. Is his mortality a ticking clock for the show?

Eisendrath: It’s not a day-to-day thing. He’s very positive about life. He’s an upbeat person and every day will be treated as a joy for Red like it always has been. But this does linger, and it will come to a head in a way that he obviously will have to deal with moving forward.

In the next episode, the logline insinuates that there will be a drastic action that changes Liz and Red’s relationship forever. What can you tee up for us for next week?

Bokenkamp: The actions of the coming episode are going define everything going forward. There are choices that are made that are hard to come back from. And I think audiences are going to understand why in this next episode, things are going to shift in such a dramatic way and in an interesting way. It’s a great evolution of the series and one that’s been a long time coming. I’m also super excited just about the variety of blacklisters and cases of the week. While the first two or three or four episodes are rather serialized, we’ve got some pretty odd and dangerous and unusual cases of the week that are going to weave into the story in a way that I’m really excited about.

The Blacklist airs Fridays at 8 p.m. ET/PT on NBC.