This Morning: Dermot O'Leary clashes with guest on vaccines

Beverley Turner is a familiar face to regular viewers of This Morning, but her most recent appearance could have been her last. Following an on-air argument between Beverley and This Morning presenter Dermot O’Leary, ITV have reportedly banned her from appearing on the show.

ITV has reportedly blocked Beverley from This Morning after she had row over the coronavirus vaccine.

A debate about the vaccine’s effectiveness quickly turned into a heated row after pundit Beverley suggested young people should reject the jab.

Staff on the show have reportedly been told not to book Beverly as a news reviewer for future shows amid fears her views are too controversial.

“Production staff were told Bev is banned from the show after the comments she made… they couldn’t have her on again,” a source told the Mail on Sunday. 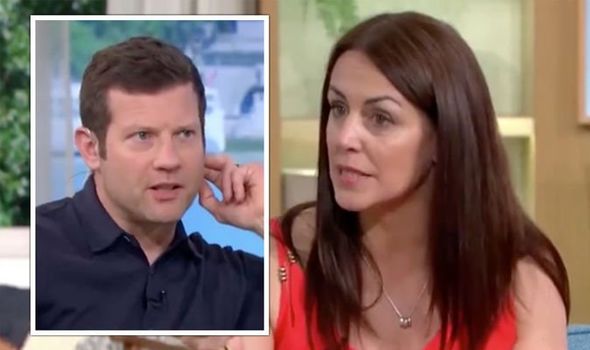 The star got into an argument with presenter Dermot O’Leary live on air last week.

Beverley spoke about the vaccine on This Morning, saying: “This jab is not a vaccine by any traditional definition.

“It does not stop you catching Covid. It doesn’t stop you transmitting it.”

Dermott replied: “The finest minds of science have, in an extraordinarily short amount of time, come up with this vaccine.

“It’s proven it’s working statistically. Why are you so cynical?” The This Morning presenter asked.

“We have no long term data,” Beverly said, hitting back at the presenter.

“But, we have no chance to have long term data because we have this virus that is killing people around the whole world.

“We don’t have that luxury,” Dermott added.