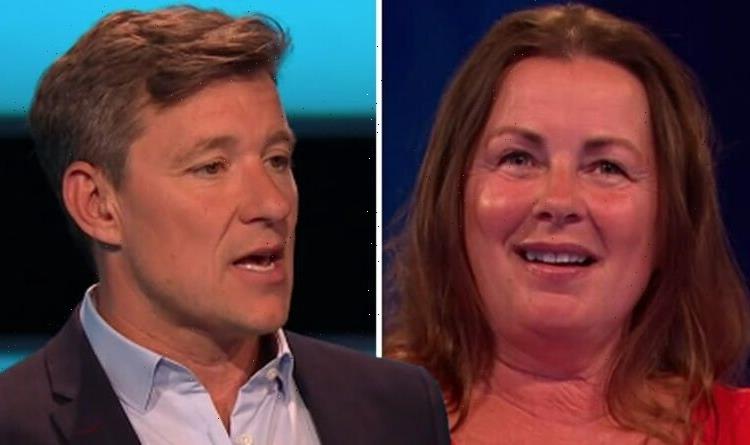 Tipping Point continued with another brand new episode on Monday as Louise, Neil and Katherine battled it out for their chance to win the £10,000 jackpot. However, the ITV quiz show took an unexpected turn that left host Ben Shephard praising Katherine for turning around her misfortune.

Louise soared into the lead in the first round while Neil sat comfortably behind.

Meanwhile, Katherine entered the second round with an empty jackpot.

After answering both of their allotted questions and winning counters, Louise was left with £1,350 and Neil with £450.

Katherine answered four questions correctly in the second round and therefore had four counters to win enough money to overtake Neil.

Ben remarked: “[Neil] has done a very generous thing by leaving a load of counters in drop zone four for you and a few in three as well.”

“Take your time here Katherine you need every one of these to count,” he added.

Katherine kicked Neil out of the quiz show and went on to face Louise in the head-to-head.

Commenting on Katherine’s change of fortune, Ben said: “What a comeback in that round.”

“You were miles away and now you’re just a £100 shy of Louise,” the host continued.

“I know it’s amazing,” Katherine remarked and Ben added: “You’ve done a great job, you battled back and you got the counters when you needed them.

“You’ve put Louise under a lot of pressure but there’s still a lot of counters to play for in this round.”

Katherine’s luck continued and the player sailed through into the final round.

In the final, Ben told Katherine: “What a battle you’ve had,” and the player replied: “I don’t know where that came from.”

“What were you thinking back in round one?” Ben asked and she said: “I just thought especially when I went down to one counter left, ‘That was it’ but what’s meant to be will be.”

Katherine’s luck appeared to run out in the final and she failed to move the jackpot counter off the top shelf.

Reflecting on the show, Ben noted: “Katherine is leaving with £2,700 and a lovely prize.

“She battled so hard to get here in the final sadly though we couldn’t get enough counters on the jackpot and it’s still there on the top shelf.”

Tipping Point airs on ITV on weekdays at 4pm.