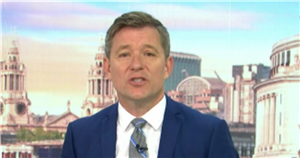 Ben Shephard was forced to apologise on behalf of the Good Morning Britain production team after they were inundated with complaints from viewers.

Fans moaned that while specifically tuning in for their local news they were instead presented with the wrong regional updates.

The 46-year-old and his co-star Kate Garraway, 54, explained that the disruption had been caused by human error – claiming that a member of the ITV team had plugged in the "wrong wires" which had sparked the issue.

It was the Tipping Point host, who stepped up to address the problem, and offered up an explanation. Speaking to those who had been affected, Ben said: "Good morning, now lots of you getting in touch because unfortunately for some reason the local news that you were just enjoying perhaps might have been from a different region from where you are waking up this morning.

"Apologies for that. Somebody put the wires in wrong."

Kate interjected: "I mean when you put the wires in, they need to be better colour-coded."

Ben joked: "That's what it is.

"We will try to sort that out to ensure that you get the correct news for your region."

Diverting the conversation, Kate added: "Fortunately across all regions now, we’re going to be talking to Sir Keir Starmer."

With that said, the leader of the Labour party appeared via a video link for an interview with the two hosts.

However, fans on Twitter were unimpressed with Kate's interviewing skills, highlighting that her questioning had taken too long.

One person wrote: "Kate Garraway asking long, rambling, slanted questions and not allowing Keir Starmer to answer them (or indeed listening to him) before interrupting further. #GMB."

While another added: "#Starmer having to concentrate to try & remember what the question from the horrendously long-winded #KateGarraway is."